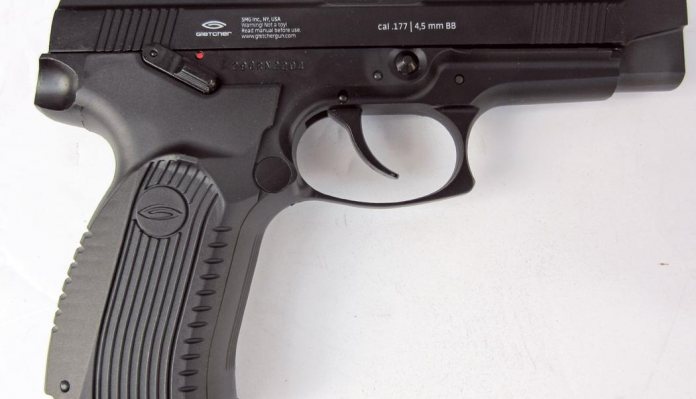 A little while back, I had the great pleasure of range testing a really super Mosin Nagant boltaction air rifle from Gletcher and in my opinion it was really spot-on. The Mosin Nagant is now of course, for many, a museum piece but luckily Gletcher bring things bang-up-to date with their CO2 driven, non-blowback take on the MP-443 Grach pistol.

Gletcher’s parent company, SMG Inc. was established in 2008 and they specialise in the production of ‘pneumatic’ guns under their ‘Gletcher’ brand, as well as tactical and outdoor knives. They pride themselves in making products with the highest level of performance, quality, and craftsmanship. Their tag-line “Military Precision”, emphasises the high level of function and design in their air guns. In the United States, Gletchr replica air guns are used by owners of real firearm to maintain their shooting skills; whilst in Europe, Gletcher air guns provide enthusiasts with the rare opportunity to capture the spirit of owning legendary firearms.

The MP-443 Grach, or ‘PYa/ Pistolet Yarygina’ (‘Yarygin Pistol’), is the Russian standard military-issue side-arm these days, although many are unaware of this, thinking that the aging PM is still doing the job. The development of the pistol was headed up by the designer Vladimir Alexandrovich Yarygin, under the designation ‘Grach’ in response to Russian military trials, which began in 1993. In 2003, it was adopted as a standard sidearm for all branches of Russian military and law enforcement, alongside the Makarov PM, GSh-18, and SPS.

The PYa is a high-capacity, double-action, short-recoil semiautomatic pistol. The barrel/ slide locking is a simplified Colt– Browning design, similar to that found in many modern pistols. Though the grips of the pistol are polymer, the weapon is largely made of metal (stainless steel for the barrel, carbon steel for the frame and slide). It is chambered for the 9x19mm 7N21 cartridge; the 7N21 features a semiarmour- piercing bullet with a tempered steel core. The weapon can also use standard 9x19mm Parabellum/9mm Luger/9x19mm NATO cartridges, including civilian loads, such as hollow points for law enforcement, but only full metal jacket bullets are permitted for use in military weapons.

In 2008, it was supplied in small numbers to selected Special Forces units, but in 2012 massive deliveries of PYa pistols to the Russian Armed Forces started. By early 2016, several thousand had been supplied; but nevertheless, the PM pistols are yet to be taken fully out of service. It has been suggested that the PM will have been finally replaced by PYas by 2019, but of course only time will tell!

I was really interested to see what Gletcher had pulled together, as the PYa is such a new model, and I’ve got to say that when it arrived with me I did say a quiet “wow!” Intense realism is built into this CO2 copy of the modern Russian firearm, and I think you’d be hard-pressed to tell the real and the replica apart other than the fact the Gletcher quite clearly has the .177/4.5mm calibre clearly marked on it.

Of full metal construction, the Pya is a solid handful, with polymer grips that accurately mimic the real thing. The Gletcher uses a 12-gram CO2 capsule, which fits neatly into the 18-round, removable BB magazine. The pistol benefits from both double- and singleaction, with a 6.625lbs. trigger-pull on DA and 5.78lbs. trigger-pull on SA. There are clearly marked fixed front and rear sights, and a very obvious manual safety.

Weighing in at 2.12lbs/961.6g the PYa is actually beautifully balanced with the majority of the weight in the pistol grip area, as both BBs and the power caplet are held there; to give you the most bang for your buck, the PYa doesn’t have blowback, which of course conserves CO2 and gives you more shots per CO2 cartridge! I tested the PYa using .40g Premium Grade Steel BBs, and running the pistol through the chrono gave me a mean of 2.41-Joule/361fps/1.77ft/ lbs, which is again spot on. In terms of accuracy, the Gletcher is first rate, setting side-plate sized spinners a-spinning at 10-metres.

I’m every bit impressed with the PYa ‘Grach’, as I was with the Gletcher Mosin Nagant, and with an 18-month warranty, the asking price of £199.99 seems fair to me! If, like me, you’re a fan of things Russian, then the Grach NBB is most definitely a model that you’ll want in your collection!

My thanks go to http:// sportsguns.co.uk for the loan of the test pistol; for more on the extensive Gletcher range, and much, much more do visit their website.