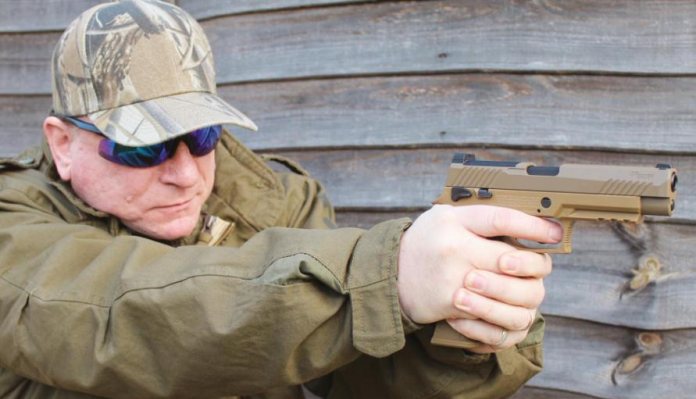 I don’t know how often service pistols get used in anger, but the world’s armed forces all use one. Most are carried often and shot little, as those issued with them only really have them for personal defense, there main job often being something more technical or mechanical.

Previous US service pistols included various revolvers, but the most famous must be the Colt 1911 and 1911A1 semi-autos, which fired the 45 ACP cartridge. There was therefore a great deal of controversy surrounding the adoption of a 9mm pistol as its replacement in 1985. However, the Beretta 92FS, which was adopted as the M9 in US military circles, has been replaced by another imported design, a modified version of the Sig Sauer 320. It’s not the first Sig to be adopted however, as the standard ‘compact’ pistol, carried by Air Force pilots and Navy SEALS, has for many years been the Sig P228, known as the M11.

Some of the requirements laid down were as follows: ambidextrous thumb safety, loaded chamber indicator, a modified trigger that prevents debris entering the internals, a 4.7” barrel for the full sized M17 and a stubby 3.9” for the compact M18. The magazine holds 17-rounds in standard form, with optional 21-round extended clips available. The pistol uses a strong polymer lower frame and a steel slide; the metal components all have a high-tech coating to resist corrosion and the overall finish is very pleasing. The pistol is striker fired, with no external hammer and a very sweet trigger pull for a service pistol. The slide has glow-in-the-dark Tritium sights; green up front and orange on the rear notch, which encourages proper alignment under stress. Both pistols have a removable rear sight plate, so that soldiers can install Delta Point red dots optics if required. The M17 is being supplied with two extended 21-round magazines and a standard 17-rounder.

That’s a brief look at the ‘real’ pistol, which looks like it will be very popular with those who are issued with it, but what about we British sports shooters, who can’t own such finery anymore? Well, Highland Outdoors recently sent me an extremely fine replica of the M17 and boy, it’s lovely! Overall weight is 2 lbs 2½ ounces empty and it fits my hand perfectly, so I guess I’ll start with the ‘coyote tan’ polymer frame. This component is a one-piece moulding and, even though it’s quite thin around the magazine well, it’s very strong, with barely any flex. There are textured panels on both sides, as well as on the front and rear; grip is very good and I’m sure it will work well in less than ideal combat situations. ‘SIG SAUER’ is moulded into both sides of the grip too. The top of the backstrap has a large ‘beavertail’ extension, which anchors the pistol in the hand well and would help with recoil control on the 9mm version, not that we must worry about such matters.

The angular trigger guard has seven grooves for grip and the underside of the frame has three Picatinny slots for mounting a torch or laser unit. The triangular magazine release catch is at the rear of the trigger guard where it meets the frame and is simply depressed to drop the mag; the weight of even an empty is enough to allow it to drop free when required. The magazine fitted is of the extended style.

A small, ambidextrous safety catch is positioned at the top rear of the frame and is pushed up for SAFE and down for FIRE. The slide release catch is above the trigger and there is a dummy slide catch on both sides. The takedown lever, which I’ll look at in more detail later, is above the trigger.

The M17’s slide is made from steel and coated in a slightly darker finish than the lower; this is the same on the service pistol and I’m not sure why the ‘two-tone’ effect was chosen. There are angled cocking serrations front and rear, so the user can choose how they rack the slide. There is an angled foresight with a white dot on its rear face and the rear sight has similar white dots either side of the U-notch. The sight picture is very good, with a slight gap between the front and rear when in use. The sights are fixed; so, if they don’t line up with the fall of shot, aiming off is required. The rear is part of the rear plate and I don’t know if it will be possible to remove it and fit some form of red dot in the future, but it would be great if something were to be available further down the line.

The blowback slide can be pulled to the rear and it returns under spring tension. It can be removed very easily; unload the gun and remove the magazine, then push it back using the left hand, whilst rotating the release catch with the right thumb. The rear is then lifted and away, to reveal the barrel, firing valve and hammer. To refit, simply reverse the operation.

The mag is well designed and made and is in two parts; the main body is alloy with a black plastic cover and a coyote baseplate. There’s a small button in-set into the front and, when pushed, allows the small plastic pellet magazine to pop up. There’s a hinged plate on the rear and when the sides are gripped, the rear portion hinges down to reveal the neat little alloy and plastic pellet carrier chain, formed from 10 double links, giving a capacity of 20 pellets. Ammo is loaded one at a time and the chain is manually indexed until filled. I found it more efficient to load 10 pellets into the bottom section, rotate it once and do the next 10! Once filled, the pellet magazine is placed into the front of the main housing again until it clicks into place.

To fit a 12-gram CO2 bulb, you pull the clamp on the rear down and a capsule is placed into the housing with the neck up. The lever is then pushed back in, which pierces and seals and you’re then ready for action!

The slide comes back at quite a speed and it really adds to the realism whilst shooting. Accuracy from the rifled barrel was good with the 7.26-grain Webley VelociPell flat headed pellets that came with the Sig. This is more of a fast-fire plinker than a target machine, but I guess I was getting 1½-2” groups using a two-handed hold. Velocity is said to be around 430 fps, which will depend on the temperature and how much CO2 is left in the capsule. I later moved on to a few empty plastic bottles hung on strings, which was much more fun than punching holes in paper!

The trigger was good, and I could roll it back to just before it released the shot and I think that accuracy would have improved the more I shot it. I managed six magazines per capsule, which equates to 120 shots and, when you consider that gas is used to make the slide recoil, is very good. Changing capsules is quick and it’s nice not to have to tension a thumbwheel like you must do on a lot of other similar pistols. The pellet magazine is easy to remove, fill and replace and I can’t find anything at all that I don’t like about this great little pistol! What made it even better to use was the fact that I was sent a spare magazine, which reduces downtime. Highland Outdoors had better make sure that they have plenty of these pistols in stock, as they’re going to sell loads!