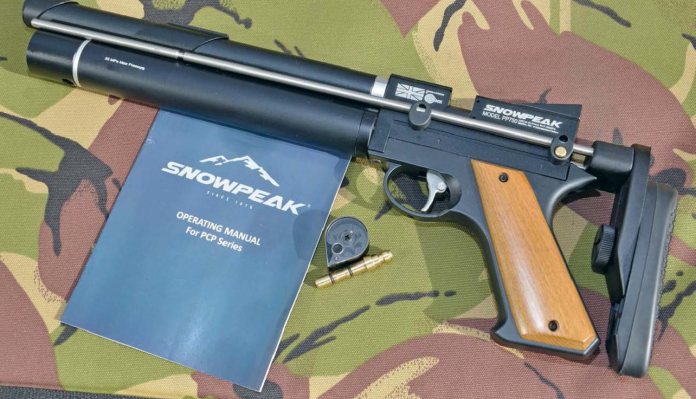 Don’t worry, I do appreciate that I’m rather fortunate. Testing and evaluating airguns for a living is, on the whole, a thoroughly absorbing way to earn a shekel or two, and I wouldn’t try and pretend otherwise. Yet my job is made somewhat easier when a product comes along that shows real originality and design flair.

And so, for that very reason, I raise a glass to Sportsmarketing, otherwise known as SMK, as the chief contender for the Innovative Airgun Award. The brand collaborates with a variety of far-flung manufacturers, and as a result, imports an astonishing amount of reasonably priced hardware, all aimed at the shooter who appreciates value for money.

I’d got wind of Chinese operator, Snowpeak over the last year or so, but the SMK Snowpeak PP750 is the first model that I have actually handled - what an eye- opener it is too!

To be quite clear from the start, this model is an air pistol throughout and generates sub 6 ft/lbs of energy as a result. I’m describing it in that way since the neat design also includes a pull-out, skeleton stock, complete with an adjustable butt pad. The action is PCP and there’s a 2-stage trigger, safety catch, open sights, magazine system, manometer, singleshot tray, provision for a scope, side-lever cocking and even wooden grips. I think you’ll agree, that’s some spec sheet and potentially a lot of fun for what looks like a reasonable RRP of £299. There’s even a bag of spares including o-rings and seals, although these are best stored in a safe place for someone competent to make the best use of, rather than some casual DIY undertaken on the PCP action!

Open sights as standard are always handy, and given the elongated body and long sightline afforded, they work well, even though the rear is non-adjustable, save for a reversible notch/leaf. Of course, the big feature with the Snowpeak is the retractable rear section. Gently slide out the skeleton rear stock, extending the overall length by just under 10” in the process, and the handling, feel and looks are transformed in seconds. It’s all a bit James Bond and I have to say, great fun. It’s worth stating that the slideout stock can be pulled clear and put to one side if you just want to experience the pistol uncluttered. However, that extendable stock is what makes the PP750 fairly unique, so I would embrace its charms and have done with it. Pull it to the rear and it clicks/locks in place once the indents pass over the spring-loaded buttons on either side of the action. Closing it back in just needs the buttons to be pressed on each side.

Right, let’s get the basics sorted, and then we can get down to business. The cylinder first needs to be charged to 250bar, which is quite a high fill pressure but easily achieved given the highly civilized straight line quick fill adaptor probe. I love this design since it just snaps straight into a Foster end, which in our frustratingly non-standard industry, can still be widely found on the airline side. No spanners are required and no fretting that the threads have been properly tightened to form an acceptable air seal. Hit 250bar, bleed the line, pull out the probe and close the revolving dust cover on the gun’s valve.

As usual with PCPs, we look at the gauge on the charging gear for ultimate accuracy but for the record, Snowpeak fit the manometer to the front of the cylinder. Not the safest place to look down, as we are always highlighting, but a regular design booboo nonetheless. If you do insist on nearly looking down the barrel to check residual pressure, at least open the side-lever as a precaution!

The PP750 comes with a well-made magazine, metal body and magnetic positioning. Filling requires the front cover to be twisted anti-clockwise, all the way around, and then the first pellet to be dropped skirt-first in from the back. This holds back the spring pressure and pellets can be dropped headfirst into all the remaining holes from the front.

Now, look to the right side of the action and you’ll notice that super flush little side-lever. Pull it back to cock and draw back the pellet probe. Now slide the magazine into its slot within the receiver, from the left side, and you’ll feel the small magnet do its job and pull the mag in at the last minute. Shut the lever, and we’re good to go. Capacity is 7-shots in .22 calibre (on test) or 9 in .177. Don’t forget that there is a single- shot tray that simply snaps into place when needed.

On test, I noted that pulling back the small side-lever does require more effort than some, but it’s no big deal. Likewise, locating the magazine in its slot can be fiddly at first, but it’s more about technique. Once in position, everything cycled without a hitch. On test, the nicely shaped trigger tripped to an acceptable degree with the initial creep taken up, and there is some adjustment if deemed necessary. Muzzle report is fairly modest too, which is nice, given there’s no provision for a silencer, and this is a short-barrelled PCP, normally capable of generating a healthy crack at the business end. Look closely inside the barrel shroud and there are clearly some small baffles going about their business, and they work believe me!

Before evaluating whether I could hit anything, I was keen to see what sort of shot count we were looking at from the air cylinder. From that 250bar fill, I clocked 42-shots, or six magazines worth, all within a 21 FPS total spread, which I reckon is quite satisfying and highly usable.

Let’s cut to the chase. The big pull and novelty with this Snowpeak is that extendable stock, so it’s about time we indulged ourselves. As previously touched on, the operation is nice and simple – just slide it out until it clicks and locks in position, and then the rubber butt pad can be adjusted. Just slacken the large knurled wheel and the pad can be slid downwards by about 1”. I dropped it down to the max, but still felt shooting with open sights was a bit of a struggle.

Look closely at the action and it’s clear that the PP750 is geared towards fitting glassware, given the small run of dovetail on the receiver and the forward mount that sits around the barrel shroud. I fished out my trusty SMK pistol scope for the occasion and as it transpired, it was a perfect fit.

Wow! Fitting a scope rather transformed things and blew a hole in my initial ‘fun gun’ assessment. At 30 yards it produced groups measuring just a tad over 1/2”. Bloody hell, this thing can shoot! Doesn’t it know it’s meant to be a pistol? I used Wasp pellets here, but it didn’t seem particularly fussy either way.

Of course, it really is great fun, but having the metal rails of the rear stock touch against the face does feel like something is missing. This is an area where inexpensive customization will, I’m sure, come to the fore. For example, a piece of stiff foam held ready in the pocket, that just pushes over the rails will be a mini enhancement for some. Yet, I can’t help thinking some sort of small, cheap, snap-on cheekpiece that’s supplied by the manufacturer would have been nice. A small cheek attachment, temporarily stored as a pressure fit around the underside of the cylinder perhaps, adding just a small amount of height to the sightline, and a touch of comfort into the bargain. Again, a piece of foam compound would suffice, adding just pence to production costs I’m sure.

OK, nit-picking over. As it stands, the highly versatile SMK Snowpeak PP750 still works a treat and I really warmed to it on test. There is something childishly exciting about the condensible, portable format and with bags of character and some serious performance, what’s not to like?

Thanks to Range & Country Shooting Supplies in Sleaford, Lincs., for the kind loan of this pistol.