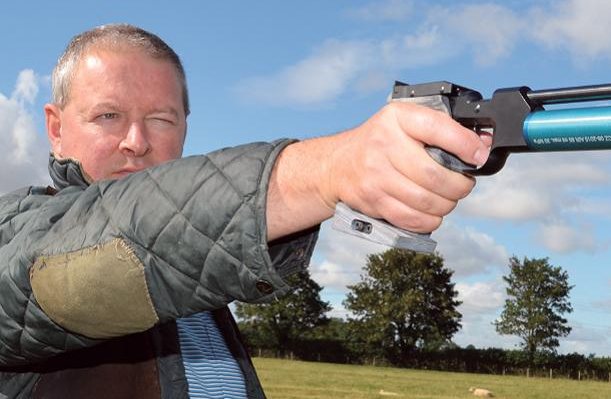 Indoor target shooting can be very appealing, and many of us, myself included, gained invaluable experience from an indoor club, from quite an early age. A disciplined approach and an informative, supportive atmosphere are the building blocks of any successful sport, and that’s certainly something that I was lucky enough to experience within the target club scene, as I excitedly learned the ropes, so to speak.

For those who decide to concentrate on the indoor sports, air pistol shooting is one of the options, and it can be very rewarding. Match air pistol is a highly specialised area, and surely one of the very hardest target sport disciplines in which to compete. The inherently slow lock-time of the airgun, coupled with the testing nature of pistol shooting in general, is enough to challenge the very best. But it’s perhaps the cost of competing, as the kit becomes more technical, that can prove a stumbling block for many.

On test here is one of the new air pistols from TAU BRNO, based in the Czech Republic, the MK08 Match, and this is aimed at the more experienced shooter who has already ascertained that they like the sport, and wish to progress to the next level. Plenty of general-purpose pistols exist, as starter models, or informal target shooting options, but this new model from TAU BRNO has a level of refinement built in, that should help take a budding hopeful to where they want to be.

At £660, it represents a significant outlay, but with big names such as Steyr and FWB offering match grade fare around the £1500-2000 mark, cost is clearly relative. So let’s take a closer look at what we get for the money, and see whether this model gets close to the performance needed.

Striking looks come from a combination of that snazzy blue anodised cylinder and the fully anatomical target grips. Basically, the MK08 looks every inch the serious target model that it’s intended to be. Looking first to the grey laminate grips, TAU BRNO offers a choice of either small or large, right-hand or left-hand. My test model was supplied in large, with a right-hand dedicated configuration, and my large hand felt just perfect wrapped around the grip. The fingers sit nicely under the front overhang, whilst a shelf supports the trigger finger on the right, and a corresponding shelf does the same with the thumb on the left; only offset higher. The palm itself sits up against the left side, and overall, for me, I can honestly say that these grips felt as if I had provided the manufacturer with the modelling clay cast for the pattern! It was genuinely that snug. They’ll be some luck here of course, with differing hand size and natural physique dictating how good the fit is, but with those grip size options, many should be well-catered for. The palm shelf does a good job of capping off the grip, and this can be adjusted for height and angle by slackening off the twin bolt at the base.

Looking to the action, all the metalwork is very well-finished, with the breech block treated to a deep gloss black anodise, and the barrel a chemical blue. The blue anodised cylinder came a little marked on my test model, but I was assured in advance that this was a show example, and normal production would be slicker. The three-chambered muzzle stripper looks the part too, and this gets a matt black finish, which helps minimise glare around the sights.

To charge this pistol, the cylinder first needs to be removed from the action. TAU BRNO state a maximum fill pressure of 300 bar, but in practise shot count is so high that I would recommend sticking to 200 bar where everything will be under far less stress. Cylinder removal is as follows: cock the side lever and close it again, push the dry-fire button to the right, then gently unscrew the cylinder and remove. The cylinder can now either be screwed directly into the main thread of a diving cylinder, or linked to either the hose of a bottle, or a pump, via the adaptor block (supplied). If you take the bottle route, then just unscrew the cylinder on completion and don’t use the bleed facility. If you link up via a hose and the adaptor, then the line needs to be bled in the normal way first. The TAU has no filter, but there is a manometer set into the front of the cylinder.

I can’t help thinking that locating the gauge in the front of the cylinder is a bad trend on many PCPs, since it encourages us to almost look down the barrel–hardly safe practise!

As a match pistol, the MK08 comes with adjustable open sights fitted as standard. The front post of the foresight can be switched with two alternative sized elements by slackening the tiny grub screw (oh dear… we’re looking down the barrel again!) and removing the insert. On test, I did find one of the replacement inserts particularly tight in the recess, to the point where oil, some pliers and brute force were required, but I soon had it moving. As for the rear-sight, the notch size is also adjustable – this time by slackening off the tiny screws in the back of the plate then inserting the Allen key into the hole at the top to the rear of the sight. Turning left or right will increase or decrease the gap. Overall then, impressive and versatile sights, to fine-tune as required.

Cocking the action requires the slim-line side-lever to be pulled gently backwards to cock the hammer. Roll a pellet across and into the loading channel and close the lever. A dry fire option exists, which just needs the small cross button to be pushed to the right once the lever has been cocked, allowing the trigger pull to be felt without actually firing a shot. The only disconcerting aspect here is that air is discharged when the dry-fire button is returned to the FIRE mode.

Handling the MK08 soon reveals a very capable pistol indeed, with those anatomical grips bringing great feel and control to the proceedings. The full palm shelf contributes to the super snug fit, whilst a nice amount of forward weight helps stabilise the sight picture. TAU BRNO fit a very competent two-stage match trigger to this model, and with a quoted figure of 100g minimum pull weight (approximately four ounces), I was always likely to be impressed. The position of the trigger blade can be altered, for both length of pull and rotation around its axis, although to adjust release pressures, the wooden grip first needs to be removed to allow access into the rear of the action block. My only gripe here is the slightly rough finish to the edges of the blade itself, but function isn’t affected in the slightest.

And so to the test figures: over the chronograph, the TAU’s regulated action managed an impressive 19fps total spread over 147 shots from a recommended 200 bar. As mentioned, this model can be charged to a maximum 300 bar, where the shot count will significantly increase, but it’s just not worth it. I decided to test accuracy using the JSB Diabolo Final Match pellets supplied over 10 yards indoors and shooting from a rest to thoroughly test the action, since my pistol shooting isn’t what it was! Super-tight ragged holes were the result, capable of supporting a pellet! Adopting a two-handed freestyle stance, I could normally keep my shots within an inch. With little discernible movement on firing, a distinctive but satisfying muzzle report, and those reassuring statistics, I finished the session mightily impressed.

Bear in mind the cost of the top-end match PCP pistols these days, then this TAU BRNO sits squarely in the middle of the market, being neither cheap nor anywhere near their respective RRPs. Judge it on performance though, and it’s difficult not to conclude that this MK08 has all the makings of a serious match tool. Overall, it looks and feels the part. Okay, some of the finish isn’t quite as slick as it should be, but quality overall is pleasing, with a competitive, highly enjoyable package the result.