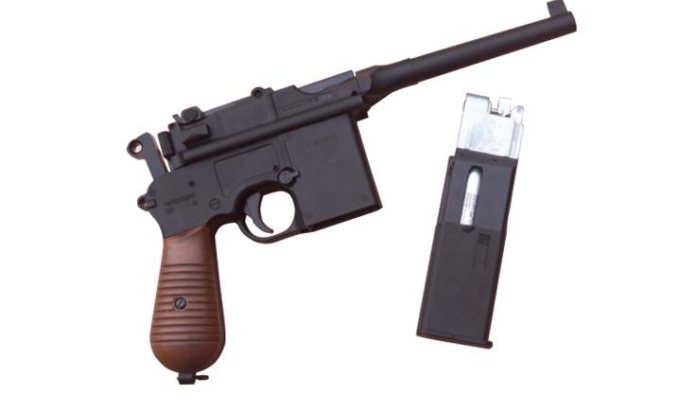 A visit to Henry Krank’s shop in Pudsey rarely fails to turn up something new that I can take an interest in. The place is a virtual Aladdin’s cave, particularly for those interested in historical reproduction firearms. Whilst I usually gravitate towards the guns of the American West, a pistol caught my eye a couple of weeks ago that warranted a further look. “Is that plastic?” I asked. The ever-helpful Ken Grey at Henry Krank’s took it out of the case and handed it to me. It turned out not to be plastic but an alloy clone of a Colt 1911, artificially aged, and using CO2 cartridges. I thanked him and handed it back – not really my cup of tea.

He then showed me another model from the same stable – a Mauser C96 pistol. I can count on one hand the number of real examples of this gun I have seen that have not been de-activated and, sadly, I never got to shoot one before we were all deemed by HM’s government to be unsuitable to own a cartridge handgun. I think that I read somewhere that Winston Churchill carried one of these, and of course I’ve seen one or two in movies, ironically, Western movies – John Wayne’s son used one in Big Jake and one of the bad guys carried one in Hang ‘em High.

So I was a little intrigued with this model and Ken graciously, as always, allowed me to borrow one to ‘play with’.

Years ago I owned a couple of single action air cartridge revolvers, again before Her Majesty’s government stepped in, but I was not overly impressed with the performance and sold them on, thankfully before they were outlawed (How on Earth that piece of legislation got through I’ll never understand!).

One in a Million?

The C96 turned out to be a lot of fun and, while not as powerful as my Webley air pistol, the multi- shot semi-auto system brought back some fond memories.

I have nothing to compare this pistol with so I cannot say for sure how accurate a representation it is, but to my untrained eye the overall impression certainly looks good. Designed in 1895 and produced from 1896 to 1937, around one million units of the original pistol left the Mauser factory with untold numbers of copies made in Spain and China. It was nicknamed the ‘broomhandle’ Mauser because of its round wooden grip and the 7.63x25mm Mauser cartridge with a stated 425m/s, was the highest velocity commercially produced pistol cartridge until the advent of the .357 magnum in 1935. (The Umarex has a claimed maximum of 128m/s). Early in the 20th Century the German military ordered a number of these pistols in 9mm as production of the Luger pistol was not keeping up with demand.

Due to the plastic components of the Umarex C96 (barrel exterior, magazine well and parts of the receiver) the test example, including the CO2 cartridge, weighs in at around 300g less than the all-metal original, and is around 15mm shorter, although the barrel is 5mm longer. The overall finish is, with minor exceptions, matt black with brown imitation wood grips. A lanyard ring is fitted to the butt and there is a slot on the back strap, presumably where a shoulder stock would have attached on the originals. Front sight is an inverted ‘V’ and the rear is a tangent with a v-notch, graduated to 1000 yards/metres, although it does not raise above the 400 mark, slightly academic in this instance, although the instruction booklet claims a ‘danger distance’ of 300 metres. Compare this with a stated effective range of the original’s given as 150 - 200 metres.

The magazine is cast alloy with a plastic base cover. It is dropped from the frame by depressing the button on the right side of the well just in front of the trigger guard. Pull the plastic base away from the magazine and it stops, requiring another button to be pressed to remove it altogether, allowing the standard 12g CO2 bulb to be inserted. This outer plastic base can be left in place to load the BBs. Magazine capacity is 18 of the 4.5mm (.177) steel BB pellets and the spring loaded plunger can be locked open to allow easy loading. The loaded magazine pushes back into the frame with a positive sounding click. Slip off the safety catch in the left side of the hammer, pull back on the cocking lugs and you are ready to enjoy yourself and maybe bring back a few memories.

This was my first experience with a CO2 weapon and I was pleasantly surprised. The Umarex is a blow back mechanism allowing you to squeeze off the 18 shots as fast as you can pull the trigger. Before I realised that I should be doing some checking I was into my third gas cartridge! This is what shooting should be about – fun.

Because of my inexperience in this field I think that I cut the dispenser top off the BB bottle a little too near the base. Had I left a smaller hole then loading the magazine might have been a bit easier and faster. Nevertheless I can see that if this was the only gun you are shooting then it would not take too long to rattle through a bottle of BBs, although the cost of the bulbs needs to be taken into account.

Shooting at around 20 feet with a fresh bulb and using a rest I achieved a best five-shot group of a shade over one inch and I was happy enough with that. As the velocity begins to drop off, at around 45 to 50 shots, then the accuracy fades too, but then you can still pop a few soft drink cans until the bulb expires. I was enjoying myself so much that I forgot to count how many shots I made before the gas ran out! Trigger pull is fairly heavy but you soon get used to it.

The C96 is part of the Umarex ‘Legenday Guns’ collection, which also includes a clone of the Luger – named P.08 – and a Makarov pistol. Both of these last two are full-metal construction. The box contains a leaflet showing the range of Umarex air guns – an amazing variety – and a multi-lingual instruction leaflet.

My time spent with the Umarex C96 was highly enjoyable and I now understand the attraction of these guns that require no licence yet still provide some great entertainment, in this case for around £100.