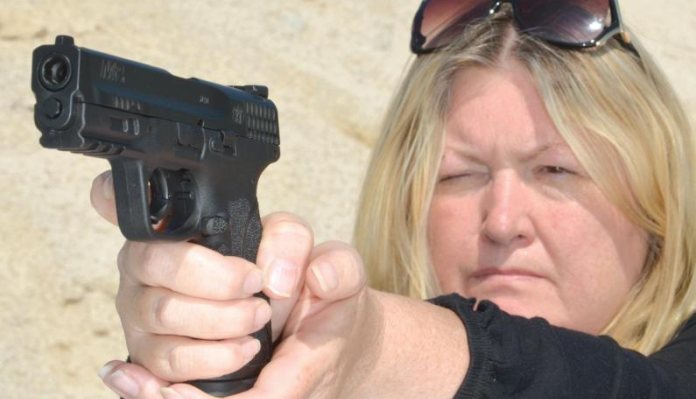 Umarex is based in Germany and is the largest manufacturer of over-the-counter firearm replicas, and apparently the biggest importer of airguns in Europe, which is some boast. A big slice of their business model is producing replica airguns under license from the original branded manufacturers, and Smith & Wesson is among the legendary names that have such an arrangement.

Attention to detail, combined with a CO2 power plant, has become their standard format, and one of the latest replicas to be released from their prolific design department is the Smith & Wesson M&P9 M2.0. Externally, it is a faithful reproduction of the firearm of the same name. The real version is a revised model, and is S&W’s attempt to take on the ever popular Glock pistols as they compete for military and police contracts worldwide. And that of course, is where the ‘M&P’nomenclature comes in.

Back with the Umarex version, and as is the norm, power is derived from a single 12-gram CO2 capsule. As for the specification on offer, this model fires 4.5mm steel BB’s, has an 18-shot magazine, includes a double-action trigger, safety catch, metal slide and features a blowback action. There are also customizable grips and a picatinny rail, giving us a lot to look at.

When handling the M&P9, it does have an authentic feel. There’s a nice amount of weight in the hand, despite the frame being formed from polymer, the quality of which is classic Umarex. Precise moulding, and pin sharp detail all play a part, and the end result is a smart pistol, that really looks the business.

First, pull the metal top slide to the rear. As is often the case with this style of pistol, the mag well is located in the pistol grip. As well as the BB’s, the magazine itself also incorporates the 12-gram CO2 capsule. To gain access, first press the mag release button, just low and to the rear of the trigger guard. It should then drop out, hopefully into your hand!

To fit the capsule a cover on the base needs to be slid forward (a bit tight on my test model) to reveal the socket hole, where the large allen key supplied can be inserted and the bolt retracted.

The capsule can be fitted into the recess and pierced by gently tightening the bolt back up. A small hiss will be heard, and that means power is available.

To load up the mag, pull back the spring loaded follower with the thumb, and at the same time, drop 18 steel BB’s into the top aperture. This was quite an easy task too, compared to some more fiddly nail breaking designs I have used. Once full, it pays to play the part of an action hero, and snap the magazine up and into place with enthusiasm, as this causes the top slide to fly forwards, all adding to the experience. Replace the mag in a sedate fashion, and the slide may fail to move. In which case, just depress the slide release catch on the left hand side of the pistol, and you’re ready to go. This is far less satisfying though!

CO2 basically means fun, and the fast-fire action that it enables is simply addictive. The sights are fixed, but with super clear white dots aiding the sight picture, fast target acquisition is easy. Having said that, the point of impact during testing was about 1.5” to the left at 10 yards. The trigger on the test model was a little stiffer than many comparable pistols, but I did like the articulated trigger blade, providing a pseudo two-stage set-up.

The safety catch is located on the right hand side of the frame, although it is spring-loaded, stiff, and a two handed job! I’m no fan of safety catches in any case, even considering them a liability, so take my advice, ignore it, and instead, adopt a safe shooting regime. On that note, one proviso with CO2, that I feel duty bound to hammer home, concerns the wearing of safety glasses during use. BB’s are prone to ricochet, and whilst a suitable target can be set up to absorb the impact, and catch the spent shot, I wouldn’t take the risk lightly, for the sake of a simple precaution.

Firing all the BB’s over a distance of 10 yards, proved that groups of around 2.5” are achievable, which is basically a drinks can end on. This is not bad, and with an average of 98 shots from a single capsule, we are talking a big score in terms of the fun factor! There’s additional fun of course with the blowback action, as the metal slide flies back and forwards during the shot cycle. That said, it all happens so fast with this pistol, that you can barely see it! Like the real version on which it’s based, there’s a picatinny accessory rail upfront, making it easy to fit a laser.

OK, build quality was a little bit more rattly than some of the other Umarex models, namely where the slide attaches to the frame, but in general, components are still satisfyingly precise.

There is the option to fit customisable grips as the rear section of the pistol grip can be removed, and swapped with a larger or smaller section. Overall, the Umarex Smith & Wesson M&P9 M2.0 is neat and well thought out, with a huge shot count and a fun factor to match. Another classic replica airgun then, from the masters of the art.