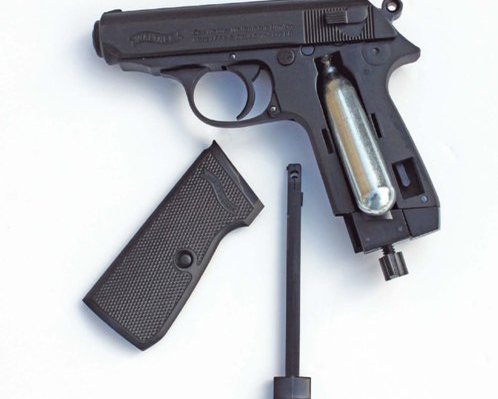 Traversing exotic cars and even more exotic women, there is only one iconic firearm that can be found nestled under the dinner jacket of a certain secret agent: the PPK, Walther PPK to be exact. After its film debut in 1962 as the issued side arm of James Bond in the movie Dr. No, the PPK quickly became a household name.

Carl Walther’s handy little pistol design has managed to carve its very own niche within the 007 legend beside the shaken, not stirred martini, the Aston Martin and the dinner suit. Over the lifespan of this popular long-running movie series, Bond and his trusty Walther PPK have reached across the world to capture the hearts of literally millions of fans. In the era of cowboys and the Old West ruling the film industry, the Walther PPK outlasted the Colt .45 and the 10 gallon hat to redefine a more cultured movie hero. Through novels, movies and even video games, fans have been able to relive the adventures of James Bond, eliminating threats to Queen and country with his trusty PPK. We’ve seen numerous actors in the role use the PPK, seen it fall out of favour only to return in our favourite spy’s latest incarnation. And now, thanks to Umarex, we can enjoy shooting a quality replica of this very handgun ourselves.

Originally released by Walther in Germany during 1929 as the PP or Police Pistol, the PPK (Polizeipistole Kriminalmodell) variant soon followed in 1931 to be used by the Detective division. Chambered in .32 Auto, this double-action design included a straight blow back operation with a fixed barrel that doubled as its guide rod to offer stability. The PPK variant offered a shorter, more concealable barrel and grip frame. This made the PPK popular across Europe in military, police and civilian markets. It is believed this new design helped to inspire other European pistols such as the Soviet-made Makarov, the Argentinean Bersa Thunder, and the Spanish- made Astra Constable, among others. Aside from its fame in film, one of history’s most noted PPK pistols was owned by Adolf Hitler himself – this pistol was determined to be the one used when he ended his life to evade capture.

The design is an enduring one, and prior to the UK handgun ban my own father owned a PPK which I learnt to shoot with. It was a handy little firearm, a joy to shoot, and easy to manipulate in the small hands of a youngster. Later in life I carried a PPK myself in ‘interesting’ parts of the world for personal protection; thankfully the firearm was only ever discharged in training, but it earned my complete respect and a place in my heart.

The ride for the PPK was not always an easy one worldwide, though as in 1978 the Walther PPK made its debut as a licensed pistol in the USA, probably the biggest market for handguns in the world. It was initially produced by Ranger Manufacturing and distributed by Interarms. Immediately the Walther design and the Bureau of Alcohol, Tobacco and Firearms (BATF) came into conflict. Due to a preset weight requirement, the pistol was redesigned with two ounces of added bulk for the American market. Next the slide/grip fit was addressed. The BATF required Walther to add more of an extended grip tang or beaver tail to the rear of the grip frame to protect users from ‘slide bite’. This happens when the hand rides too far up the grip and gets pinched by the cycling of the slide during firing.

After years of producing the BATF-approved PPK/S, Ranger Manufacturing quietly went out of production. Smith and Wesson saw an opportunity in 2002 to bring this pistol back into the limelight by taking over production.

It’s the .177 CO2 powered replica of the PPK/S pistol that is the focus of this review. How does this replica match up with the world’s best known movie pistol? Well folks, settle in and learn for yourselves…

When the 007 movie credits roll, the gun connoisseur in me always gets the urge to shoot a PPK soon afterwards, and it always makes me think fondly of my late father and his love for all things that go bang. Sadly in recent years the chance to actually get out onto the range with a real PPK has become a thing of the past, so I was overjoyed when I visited UK Umarex distributor ARMEX at their Birmingham HQ and found a pair of lovely .177 air replicas in their warehouse.

As I had arranged my visit to select samples for review I was in a quandary – should I take the plain, utilitarian black PPK or the one with the silvered slide? Sense prevailed over ‘bling’ and the plain ‘service’ PPK was duly added to my test pile.

The little PPK comes immaculately presented in a striking full-colour Walther branded box which gives all the crucial details that you really need to make a purchase. There’s detail of the action, what and how many rounds it fires, what drives it, and a host of technical details.

Opening the box reveals the pistol nestled within, and mighty fine it feels too when you lift it free; there is also a comprehensive instruction manual included. This replica is almost entirely metal, with the exception of the pistol grips, safety lever, magazine and outer barrel shroud. It has excellent detailing and both fit and finish are exemplary. It has the Walther licensing on it in all the right places and overall looks a lot like the real Walther PPK/S except the pistol grip is a little longer than the real thing to accept the 12g CO2 cylinder. One slight niggle here is that the gas cylinder screw on the base of the pistol grip is a little ugly; it’s a minor thing that has no bearing on the function of the pistol but I feel with such fine attention to detail everywhere else a little more effort could have been put in here.

The left hand grip cover is quickly and easily removed, giving access to the CO2 cylinder retention area. Once inserted, and with the gas cylinder screw tightened, the cylinder itself is firmly held in place; replace the grip cover and you’re almost good to go. The magazine is of the stick variety and holds 15 metal BBs; at first it appears slightly flimsy but in use it’s solid and feeds very well. Spare magazines are available as accessory parts from all good retailers.

Gas cylinder and magazine in and you really are ready for some serious plinking fun. The metal slide is pulled back and released to cock the PPK, and the safety works whether the pistol is cocked or not, a nice safety feature. Raising the safety on the right behind the trigger (the safety on the slide is purely decorative) from the lower to the higher ‘fire’ position means you are ready to shoot, and the simple notch and blade sights are extremely easy to acquire.

With a chronographed average muzzle velocity of just 300fps and a short, unrifled barrel this is never going to be a target pistol, but out to 30 feet it’s reasonably straightforward to achieve 2- to 3-inch groupings with only the occasional flyer. The slide moves back and forth with a satisfying thump each time you pull the surprisingly light trigger, resetting the hammer for the next shot. Even with the gas cylinder behind this action I found it was possible to still get about 60 shots off before it needed changing. Ultimately, shooting the little PPK is an altogether enjoyable experience.

As with all good things, my time with the Walther PPK/S pistol had to come to an end before the ARMEX team came looking for their gun back! This, for numerous reasons, both personal and practical, was a sad moment for me, and suffice to say that a replica Walther PPK/S will most certainly be going on my ‘to buy’ list; expect to pay £80-£90 for the PPK/S, and do be sure to shop around! Whether you buy one for reasons similar to my own, or so that you can imagine yourself saving the world from Ernst Stavro Blofeld and his minions, each time you shoot with it, the PPK/S is definitely a replica handgun that should be in everyone’s collection.