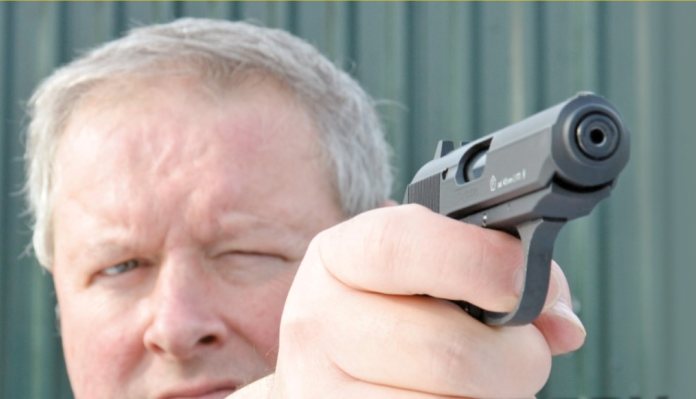 OK; I admit, the James Bond fan in me couldn’t contain a bit of added excitement when unwrapping this pistol for the test and, since we’re talking Walther PPK, I think you’ll understand. Of course, this is the iconic model issued to our man Bond in the Ian Fleming stories, and a quick visual inspection sees it as a faithful reproduction, save for the uncluttered line at the base of the grip on this imposter, against the angular protrusion of the magazine’s base plate on the original. Insignifi cant details aside, let’s look at what we have before us here. This model is the revised version, from Umarex, in that it now includes a new CO2 capsule piercing mechanism, for added reliability.

Umarex are a quality outfit, and whilst I have become something of a bore on the subject, a trip to their factory in Germany a couple of years back, left me in no small doubt, that they take their business very seriously. Quality control above and beyond, seemed to be the lasting impression, and I remember leaving their operation, amazed at the attention to detail and levels to which they go, to ensure that their products are fit for purpose.

The first striking detail is how diminutive it is. I have large hands, yet my mitts instantly felt at home wrapped around the basic, slab-sided grips. The initials stand for Polizei-Pistole Kriminal, as it’s a shortened version for plain clothes detectives, as the uniform police of the time used the larger/standard Polizei- Pistole (PP) version.

The grip plates are plastic mouldings, but the chequering and Walther logo, means they look right. Everything else however is cast or machined steel, so weight is satisfyingly realistic. A quick check of the stats for the original firearm, and I can confirm that Umarex, producing as they do, copies under license, get the weight and the length spot-on, so no wonder it feels so natural in the aim. Open sights are totally fixed, a simple notch and post, but perfectly fine for the sort of informal duties this model can look forward to.

For let’s make no mistake, we are talking fun shooting here. The PPKS is made in .177 calibre only and is designed to shoot 4.5mm steel BB’s. I’ve given an indication of velocity levels in the spec sheet, but as you will appreciate, stats and figures aren’t really relevant.

And so, to the preparation required before the action can start. This PPKS runs on one 12-gram CO2 capsule, and this needs to be loaded up. To do this, first get a fingernail under the bottom edge of the left grip and snap it free. It should come off fairly easily to expose the gas chamber. Using the small Allen-headed socket tool provided, unscrew the keeper screw in the base, and drop the capsule into the slot. Using the tool, gently tighten the bolt, until you can feel pressure and maybe a small hiss, as the top of the capsule is pierced. This will release gas into the action, then replace the grip.

Next comes the task of filling the stick magazine with BBs. First, press the mag release catch on the left side of the action, and it can be withdrawn. Feed BBs into the tube from the top left hole, whilst gently pulling back the spring-loaded feed catch. Once 15 are loaded, insert the magazine, and we are all ready to go.

You don’t have to cock the action for each shot- just pull the trigger, and the hammer stays back after the first shot. All 15 shots can be rattled off just as quickly as you pull the trigger, and as the final one is discharged, the slide stays back, preventing the pistol from being fired, so you know when to refill. So, press the button to release the magazine and pull it out of the grip and reload it as necessary.

The trigger is ver y reasonable in weight, so fi ring this pistol is a pleasant experience. The PPKS uses a blowback system, and this means in theory, some of the spent gases are utilised to help cock and cycle the action. In practise, whatever is happening, the sensation of firing this Walther is spot-on, with a kick up on firing, adding a slightly realistic feel to the proceedings.

On the real PPK, Walther fitted a de-cocker on the rear/left of the slide, which when operated dropped the hammer. When reset it then made the first round double-action-only, after that it reverted to single action. Umarex have replicated this, but it’s non-functional, the actual safety catch is a sliding lever at the top/front of the right hand grip plate and flips up to F (FIRE) red dot exposed and down for SAFE (S) dot covered. It’s a little crude and in use got caught underneath the plate at one point.

On test, I seemed to average around 45-shots (three magazines) per 12-gram, which I reckon is fair, and in terms of accuracy, managed ten, fast fire shots within a 4.5” circle at 10 yards, shot from a rest. Interestingly, I seemed more accurate when shooting free style, un-rested, probably as the pistol is then allowed to gently kick, without hindrance. Here, the majority of shots could be within 2”, but a few strays would still increase the group to around 4.5”.

Set some tin cans up, and this Walther comes into its own, being great fun to shoot. But that link with one of our most fondly regarded character s from literature just adds another undeniable dimension and with that classic Umarex feel and build quality, it’s difficult not to fall for this modern classic.

One final word on safety, steel BBs do have a propensity to ricochet. On that basis, be aware, use common sense, and don’t shoot at any solid surfaces, where ricochets would be far more likely. Rig up some sort of backstop (a hanging thick sheet can work wonders when it is free to absorb energy, and then a solid backstop for guaranteed safety behind that. Wear safety glasses at all times too, and then sit back and enjoy yourself.