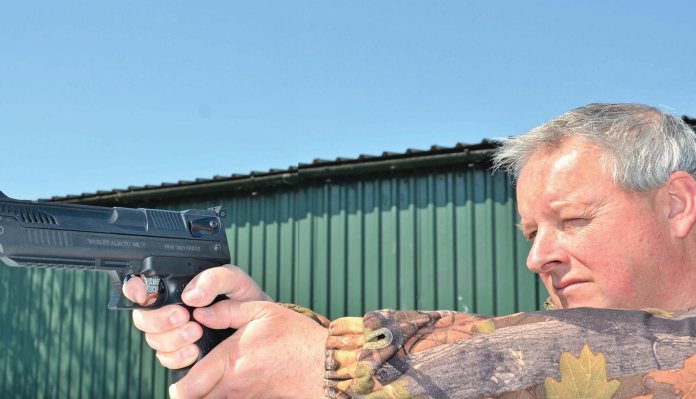 I’ve come to appreciate the sheer variety of airgun types over the years, and we really should raise a glass to those clever engineers behind the scenes, that put in all those hours of R&D on our behalf. Spring piston hardware still accounts for a huge slice of the cake, by virtue of its relative simplicity, whilst CO2 and PCP’s have flooded the market over the last few decades, but for me, a fascination with the dark arts of the single-stroke pneumatic, just won’t go away.

Generating full power in a rifle, especially .177, remains the Holy Grail, certainly where production rifles are concerned. Yet no such problem exists in air pistol format, and on show here is one of the very best examples available today. I say ‘single stroke’ but that is perhaps misleading, since the Webley Alecto (on test), is actually designed to take up to three pumps. Here’s how it works.

These airguns are totally self-contained, and an onboard piston and compression system generates power, compressing the air prior to taking the shot. The result is a lightning-fast lock-time and air release, plus a remarkably efficient action as a result.

I have to state that I do have a soft spot for the Webley Alecto since my Dad bought one a while back and we have enjoyed garden competitions ever since. A couple of years back, complications behind the scenes caused a period of interruption to production, but it’s great to see it back on the market, now in MkV guise. Let me first state, this pistol comes highly recommended, and I can, just for once, vouch for long term durability too.

Don’t be put off by the extensive composite exterior. The black polymer is so well moulded and coupled with the overall weight of 2.5lbs, there’s a quality feel throughout. Adjustable open sights including the foresight is a good start, but there’s also an adjustable 2-stage trigger, accessory rail, anatomical grips with palm shelf, rifled steel barrel, an automatic in-guard safety catch and the variable power option.

So what differentiates this from the earlier versions? Well firstly, those excellent moulded anatomical target grips now feature a fine soft-touch compound overlaid, and this is a subtle but impressive upgrade. The grips come with a dedicated heavy contour that fully supports a right-hand hold. No watered down ‘ambi’ stock here. The palm shelf at the base is adjustable and can be raised or lowered by a 1/4”, which again is a subtle detail that really works. A lefthand version is also available.

The other listed feature is an ‘upgraded match trigger’, which is quite excellent, given the crisp let off and full adjustment possible, but so was the old version, and I can’t determine any difference.

The rear sight is fully adjustable but does need a screwdriver, whilst the foresight features a revolving element. The idea is that the front bead clicks round to reveal another bead of a different height. Set up with one and zero at 10m, and then click the bead round and it shouldn’t be far out at 20m. I’m not sure I would keep wanting to stress it, but if it did break, there’s yet another bead supplied that sits in the recess. This will be a fiddly job, knocking out the tiny drift pin, but you have to admire the creativity on show.

So, to cock the action, first pull up the twin clips just by the rear sight, to release the top section. Now pull up and fully open the action in one big arc. At this point, it’s vital to stress that you need to open it to the very end of the arc. Now push home a pellet into the lip of the barrel inside, then pull back and close the action. It’s that return stroke that is actually compressing the air inside the chamber. The principle is simple; a consistent cocking arc sucks in an identical volume of air each time.

Now here’s another key detail, and back to that three pump spec. One pump generates around 3 ft/lbs and is perfectly adequate for the informal/fun target shooting that this pistol is intended for. Two pumps are approximately double the effort and they generate around 5-5.5 ft/lbs as well as a louder report. Three pumps require significant effort and add just a shred more power after the safety blow-off valve has dealt with the rest. So my strong recommendation, after all that, is simple - stick to one consistent pump, for stress-free, refined shooting. Also, make sure you mind your hands when snapping the action closed.

As for performance, these pistols can’t fail to impress. 10-shot strings with a variety of pellets, with either one or two pumps for the record, struggled to expand upon a total spread of just 4 FPS! Quite superb, and in my experience, a technical characteristic of the single stroke pneumatic. Good technique will be rewarded with this pistol too, and I had easy 5p piece sized groups at 10 yards. If you fancy fitting a pistol scope, well it is possible, although seemingly not encouraged by the manufacturers. I squeezed one Picatinny mount into that front rail slot, and it worked, although snapping the action down with glassware in place needs more care. With the fully adjustable ‘irons’ on board though, you have to ask, why bother?

The Alecto is indeed a modern classic and has to be regarded as one of the very best midmarket pistols available. Bursting with design flair and plenty of performance to back it up.

So, it just remains to thank Range & Country Shooting Supplies in Sleaford (the only Premier Daystate dealer in Lincolnshire) for the kind loan of the Alecto.