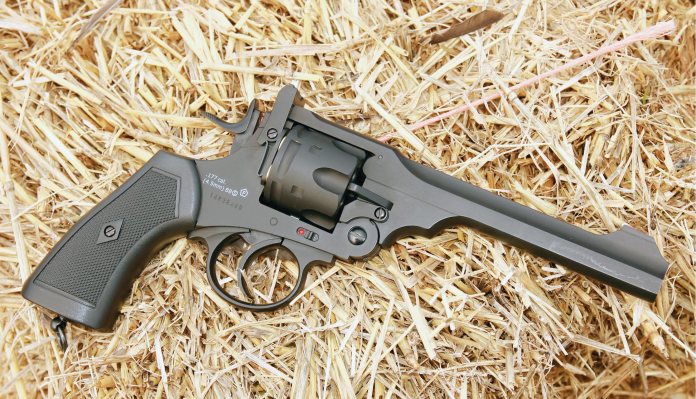 As an ex pistol shooter I have never really bought into the whole faux handgun thing and very much let AirSoft and CO2-powered BB-firers pass me by. I’m not knocking it but I just don’t like the guns. However, last year I tested something that brought a smile to my face in the form of a highly authentic and fully functional Colt 1911 A1 semi-auto pistol. Weight, size and controls were all spot on and hey even the slide cycled as the real thing. I guess it must be my love of military firearms, well if so then another pleasing imposter has just turned up in the form of that most quintessential British wheelgun the Webley Mk VI.

Webley-designed and manufactured revolvers were in British service from 1887 until 1963 in a number of calibres and options, with the smaller Mk IV chambered in 38 Webley (38/200 S&W) being used by the Police until replaced by the 38 Special Smith & Wesson Model 10. The near identical Enfield No. 2 was also used by the armed forces. Webley originally supplied their .455 calibre Webley Self-Extracting Revolver for trials, which was eventually adopted on 8th November 1887 as the Pistol, Webley, Mk I. The initial order was 10,000 units priced at the princely sum of £3, 1 shilling and 1 penny each. Probably the most famous and the culmination of the design was the Mk VI that appeared in 1915.

It’s this model that has been recreated as a .177 BB-firing, CO2 powered air pistol by Highland Outdoors, doubtless as they now market the Webley brand as is attested to by their range of air rifles. The Mk VI was designed from the original drawings and I saw a prototype early in 2014 and having shot the real .445 version I was impressed as to how well done it was. Weighing in at 2.4 lbs it’s a big pistol and currently only available in black and .177 BB. However, they soon plan to add a 6mm version, which will only generate 1.5 joules of energy as opposed to the 3 joules of the .177. Plus there will be a battle field finish (tattered) and a leather flap holster to come in late Feb early March.

The Webley uses what’s called a break or hinged frame design. A large, horseshoe latch at the rear of the frame is pulled back by a thumb lug on the left and the barrel assembly (top strap, cylinder etc) swing down to open up. The design incorporates an automatic ejector that in the real version forces the empty cases out of the chambers for a fast and easy reload.

Sights are fixed with a tall blade up front and a U-notch integral to the locking latch, so very much a case of aiming off as required! The grips are black chequered plastic like the original and the base of the butt shows a lanyard ring. The mechanism offers S/A and D/A operation (single and double action). This means you can thumb cock the large hammer spur and press the trigger for a lighter break and more deliberate shot, or just squeeze the trigger with the hammer down and it will come back and drop to fire. This is much faster but less accurate.

The three most obvious changes are the huge hole in the end shows a .177 steel liner about ½” in. The hammer does not have a firing pin and is flat-faced to operate the gas valve plunger set in the standing breech. Finally, and something I consider unnecessary on a wheelgun, is a sliding safety on the right of the frame. A small lug pushes forward to FIRE (red dot exposed) and rear for SAFE (white dot), in this position the hammer when down is locked. However if it’s cocked the safety cannot be set.

From the box the Mk VI comes with six dummy cartridges with brass bodies and grey polymer bullets with a hole through the middle. BBs are loaded into the bullet nose and the blast of CO2 passes up through the hole and pushes the pill into the barrel. The real gun fired a 265-grain .445” lead bullet at around 700 fps for about 300 ft/lbs and was said for its day to be the ultimate stopper handgun and was easy to shoot too. These days that seems tame, but that big, slow moving pill carried a lot of weight!

Much like any other CO2-powered handgun the 12-gram capsule fits in the grip with the lanyard ring also acting as a tensioner to pierce the cap. With that done open the frame and drop the shells into the cylinder and close it up. Then select S/A or D/A operation and shoot. The single action pull is soft and smooth and the double is not far behind. However, with D/A the gun will move left and right in your grip due to the trigger finger action and takes some time to master.

On the unload the ejector spring is not powerful enough to kick the bullets out and they drop back in the chambers. I found it best to simply tip them into my left hand so they don’t get lost. On that point six rounds are not enough and Highland have realised this as they also offer packs of extra bullets. They also offer a speed loader though it’s modern JET-style unit and not the original Webley design, as a matter of course if I were buying a Mk VI I’d buy a few spare packs of shells and also some loaders to be more competitive. Saying that a hinged frame revolver is a lot easier to load by hand than a swing out cylinder type.