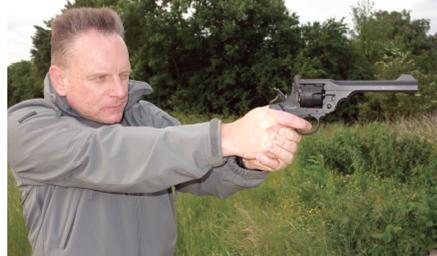 At the start of the 20th century, many countries saw the benefits of the semi-automatic handgun, we in Britain stuck to our guns- literally! However, the Webley Mk VI revolver that we clung onto for so long was quite a beast! The heart of the Mk VI is the top break design.

The barrel/ cylinder assembly is held in position by a sprung loaded catch that pivots on top of the rear of the action; pressure on the thumb lever moves the catch to the rear, allowing the weapon to break open to eject the empty cases, the extractor then snaps back into position ready to receive 6 more cartridges- it’s fairly quick but not as fast as changing a magazine or thumbing in 10 rounds from a stripper clip!

The trigger action is single or double: double action is faster than single but the trigger pull is firmer, which unless mastered, can result in inferior accuracy compared to thumbing the hammer back first. Sights consist of a fixed blade foresight and a square notch in the top of the barrel catch. No adjustment is possible with this model unfortunately. The sight picture is very good though, with the sights lining up nicely, with just the right amount of light between them to show that the blade is central with the rear notch. The grip is very hand filling, with a squared off base, with a lanyard ring at the bottom.

The Webley’s .455 cartridge was a real ‘man stopper’, firing a 265-grain lead (and later jacketed) bullet, producing around 300ft/lbs, but the item I have here is rather less powerful! Apart from the rather feeble (in comparison) power output, what I have in front of me is absolutely spot on as far as looks go, as this CO2 replica has been made using original blueprints. There’s no firing pin in the face of the hammer though, as a valve is struck by the flat face of the hammer to release the CO2, into the ‘cartridge’, firing the BB down the un-rifled barrel. Fit and finish are very good indeed and the original markings, including ‘Webley Patents 1915’ are reproduced in full.

Power comes from a 12- gram CO2 capsule housed in the grip. To insert a capsule: apply the sliding safety catch on the right of the frame, just below the cylinder, you then remove the left grip panel – a handy cut – out in the base of the grip makes it a simple affair. The lanyard ring is attached to a threaded bar and this is unscrewed to make room for the gas. The capsule is dropped in, neck upward, and the grip panel is reattached. The lanyard ring is then used to tighten the threaded bar until the gas capsule is pierced. To load the ‘cartridges’ you simply place a BB in the hole in the end of the plastic ‘bullet’ that is fitted to the end of the alloy ‘case’. Once all six are loaded, they are then placed in the cylinder and the action closed. I’d advise wearing safety glasses when shooting BBs, as they can be prone to ricochet more readily than soft lead pellets. A push forward on the conveniently positioned safety and those targets don’t stand a chance!

A few tin cans hung on strings make excellent targets and I had a lot of fun blasting away. A few more ‘cartridges’ would have come in handy but they are available as extras for not a lot of money. Accuracy was fine for can mangling but those wanting enhanced accuracy can choose the pellet-firing version for an additional £20. Power isn’t quite on the same level as the original; expect around 2ft/ lbs. but that’s more than enough to have a really good time!

The Webley Mk VI Co2 powered revolver is a very well made replica of a part of our military history but I think I’d prefer a semi auto ‘real’ handgun instead of a revolver in a life or death situation.

Were World War One era semi-auto pistols better than a revolver? Graham Allen tests a CO2 Mauser C96 to find out…

After designing his world famous rifle, Paul Mauser didn’t rest on his laurels and designed one of the most recognisable semi automatic pistols ever made – the Mauser C96, often known as the ‘Broomhandle Mauser’ due to the distinctive pistol grip.

The pistol operated using the short recoil method and the bolt was locked until chamber pressure dropped to a safe level, before the bolt travelled back, ejecting the case and cocking the external hammer. It then strips a fresh cartridge from the internal 10-round magazine as it returns to battery again. As the magazine was not removable, 10-round stripper clips were used to re-fill the mag through the top of the action, much quicker than loading individual rounds into a revolver’s cylinder. The 5½-inch barrel had a blade foresight, which worked in conjunction with the rather optimistically graduated adjustable rearsight. I say optimistically as the sight is adjustable from 50- to 1000-metres! I don’t suppose the Mauser was much use beyond 200-metres but you’ve got to love an optimist!

The body of the pistol was machined from a solid piece of steel and was incredibly time consuming to make and as a result was expensive to buy when compared to the revolvers of the day. This didn’t stop officers buying the Mauser privately though and a young Winston Churchill purchased one prior to being sent to fight in the Second Boer War. A safety catch is found to the left of the hammer; up for SAFE, down for FIRE. The C96 was used considerably during World War One, as factories couldn’t keep up with the demand for the P08 Luger, many were made in 9mm Parabellum and a ‘9’ was cut into the grip and painted red, so that soldiers knew what ammo they needed to use.

Umarex are known for their CO2-powered, pellet and BB firing replicas and the Mauser C96 I’ve been testing is a perfect example of their art. You will notice that the C96 is actually patterned after the Mauser C96 ‘Schnellfeuer’, a later model that featured a removable 20-round magazine and the ability to fire fully auto. The reason that Umarex have chosen the select fire model to replicate is due to the fact that the CO2 capsule power source needs to be a accommodated somewhere and where better than in the removable magazine. This does make this version a little ‘out of time’ as far as World War I is concerned but it’s the same basic pistol. The selector switch on the left hand side of the frame is a dummy unfortunately, as we’re not allowed full auto airguns!

A small catch is fitted to the right of the pistol, just in front of the trigger and is perfectly positioned to drop the magazine when required. With the magazine removed, it’s clear to see that the CO2 capsule is fitted up into the base and BBs are loaded into the front.

The supplied Allen key is used to remove the large, threaded ‘capsule piercing screw’ and a 12-gram capsule is dropped into the aperture. The Allen key is then used to tighten the screw, which punctures the capsule. To load BBs, the spring loaded follower is pulled down and held in place; BBs are then fed into the top of the magazine until it is full- mag capacity is 20 rounds.

To start shooting, the safety catch is applied and the ‘mag’ pushed up into the action, where it locks in place, it’s best to pull back the bolt slightly as you do it. The safety catch is then disengaged and the fun can begin! I say fun because that’s what it is; not only does a BB fire from the barrel but the bolt is cycled back by gas pressure and the hammer cocked- just like the real thing. The barrel is smoothbore, so out and out accuracy isn’t the name of the game here but tins are soon sent flying as the BBs find their mark. The rearsight notch is a very small V shape, which is a real shame as a decent U notch would line up so much better with the tall foresight blade than the rather poorly designed original. It didn’t stop me enjoying shooting the pistol though. The sights, even on the lowest setting, were making the pistol shoot a couple of inches high on my seven-yard range but I soon got used to aiming low. I actually got some really nice groups of around an inch, so plenty good enough for having a blast! A capsule was good for around 60 shots, so three mags worth.

The Mauser C96 was a groundbreaking semi-automatic pistol and the Umarex CO2 firing version is a very faithful copy. If push came to shove in the real world, I’d want a semi auto pistol in my hand, with a more rounds on-board and a fast reload option available – sorry Webley