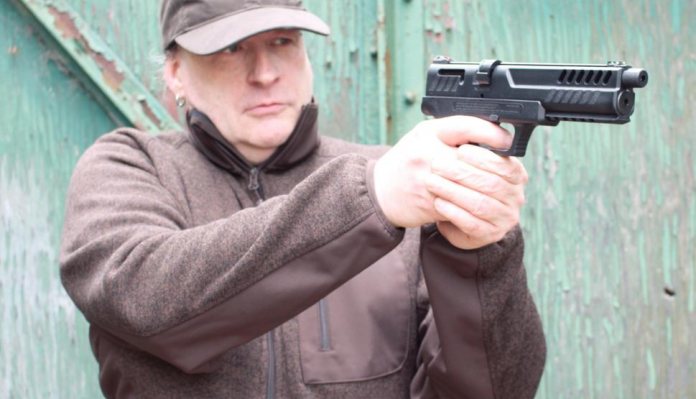 At risk of stating the obvious, Webley have a long history in the production of air pistols and, of course, air rifles. In fact, the company as they were then created the first air pistol over a hundred years ago. However, as the way has gone for many of our airgun manufacturers, Webley as a manufacturing company have ceased to exist. However, as a brand, the name carries on thanks to Highland Outdoors who ensure that any airgun bearing the Webley stamp continues to represent quality product in both manufacture and performance.

Incidentally, air pistol aficionados will remember that this isn’t the first Webley pistol of this name as the original Nemesis was a PCPpowered single shot and a very fine one at that. What we’re now presented with here is a much more versatile handgun and one with a few surprises up its sleeve or as you’ll soon discover – also in its grip.

The Nemesis has a substantial but very manageable and lightweight toughened polymer and metal build, resulting in it feeling very solid in the hold. The slab-sided combat style grips are impregnated front and sides with very fine stippling. The grip is made even more comfortable due to the slight front finger ridging and the top has a full thumb shelf on both sides – this contoured recess allows the forefinger to make its way to the trigger unhindered and your thumb to nestle around the other side as you hold it. At the upper rear of the grip the mainframe is styled and curved to reach back so it passes over the top of the shooting hand. The top of the frame has a full run of dovetails for mounting an optic, plus there’s also an underslung Picatinny rail at the very front for mounting accessories such as a laser or light.

To give you even more options for ‘tricking’ the pistol up, the barrel (which extends out from the mainframe) is threaded to accept a standard ½-inch UNF silencer. The short tube can even be seen as there are six quite generously sized muzzle vents in either side of the forward part of the mainframe, a nice cosmetic touch as they add even more macho appeal to this unashamedly Glock automatic lookalike. Talking of which, there is more ‘semi-auto’ authenticity added at the front as set beneath the vents are a number of moulded ridges with fine stippling in-between – similar to those on a live round firing semi auto handgun. On the real deal these are included to help you grip the top of the action to rack the slide of a semi-auto. To say the pistol fits your hand without any reaching or wriggling to attain a grip or draw a bead is a very true statement. Proof positive that the main design of the body mainframe and grip are completely at one with each other.

Like the majority of pistols of this ilk the Nemesis takes power from a single 12g (Powerlet) capsule of liquid CO2, however unlike equally as many handguns the power source isn’t housed in the grip. However, what the grip does hold are a few vital components, one being a tandem multi-shot magazine and the retaining cover at the base of the grip when slid out not only reveals the hollow grip compartment but is an important piece of kit in itself due to it holding a 6mm Allen head bit. This is for removing the retaining ‘plug’ of the housing which is the lower part of the mainframe.

Using the ‘key’, you need to unscrew the cylindrical metal cover so a 12g bulb of gas can be placed nose first into the housing. Then refitting the housing cover both secures the power source in place and pierces the neck so gas can flow into the system.

This is a good juncture to mention you have the option to use the pistol in singleshot mode or with the nifty and quite clever double-sided tandem magazine. This twin drum rotary magazine is configured so that they are in line but oppose each other. Each drum holds 7-shots in .177 calibre and 6-shots in .22. So, for the pistol on test that’s a full payload of 12-shots. To load the magazine, you do so one side at a time, which entails having the Perspex cover plate facing you and rotating the inner drum anti-clockwise against its spring tension. Then you drop a pellet in nose first as each empty chamber comes in line with the aperture in the cover. Then reverse the magazine so the other drum now has its Perspex cover plate facing you and repeat the process. There’s no risk of inserting the magazine into the action incorrectly because with one of the Perspex cover plates facing you (half of the twin drum) this can only be slid in from the left because an elongated slot has been formed in the forward face of the unit to mate up with the breech collar. When one side has been shot through, you draw back the blot and remove the magazine, then turn it around until the Perspex cover of the other side now faces you and then this can be slid in due to the design confi guration now allowing this to enter as before.

The bolt that cocks and probes a pellet into the tube is termed ambidextrous due to you being able to fi t it to the left or right of the pistol body. Full marks to Webley as this is a very thoughtful and consumertempting feature. The bolt is pretty much a straight pull but does require you to fi rst turn it up from its front keeper slot before it can be pulled to the fully rearward position where it locks solidly back in place.

The 2-stage adjustable trigger has a broad polymer blade and the manual cross bolt safety button is positioned directly above the middle of the integral trigger guard on the lower side of the mainframe. This push in button is ideally sited for disengaging with the forefi nger if right-handed and/or engaging from the other side if shooting with the left.

The pistol’s fi bre optic enhanced open sights consist of a raised green fi bre optic foresight bar and set behind at the very back of the mainframe are two red fi bre optic bars fl anking the square shape notch of the nonadjustable rearsight. The sights are low set, fi tting in with the combat styling of the pistol and also the length between fore and aft units is such that it easily allows you to attain a quick and very precise sight picture.

They’re very usable for informal plinking and with practice you can attain groups of within 1-inch out to 8-yards which with practice I soon did.

Only problem is if you wish to fi t a silencer, then it’ll obscure the sightline of the opens but if ‘tricking up’ your pistol to get the most from the performance it offers, I’m sure you’ll be thinking of or/already have fi tted a scope or red dot.

Without any ancillary kit added the pistol handles and balances wonderfully well and feels very comfortable in the hold. The latter of course is a credit to the design of the slab-sided and very ergonomic grip. The trigger is a superb unit and was ideal for my taste as it come set from the factory. Not a hair release, but one that you can easily control without fear of the pistol inadvertently being tilted one side or the other as you squeeze off a shot. I’d say, that deserves high praise as experienced pistol shots will be able to shoot the gun one-handed as the competitive match boys do using precision paper punchers.

So, with no recoil, and an optic on-board, plus adopting a two-handed hold I’d say with dedicated practice most could tighten those open sight groups up considerably. Incidentally, a very pleasant surprise is that even without a silencer fi tted, discharge on fi ring was very acceptable.

It’s would be certainly an understatement to say the CO2 powered air pistol market is a very saturated one resulting in the choice of models – not to put to fi ne a word on it – overwhelming. However, once in a while a pistol emerges that more than stands out from the crowd which the Nemesis surely does not only due to its very appealing appearance but its overall function, performance and versatility.

It has a very well-considered ergonomic design, is accurate as any comparable pistol plus is ideally balanced and weighted. Also, let’s not forget it’s got every base covered should you want to fully trick it up with optic, underslung laser or light and not forget of course its ability to allow you to fi t a silencer of choice.

In a sentence: It’s got the looks, performance and can more than stand up to any pistol of this type/style that’s currently in production.