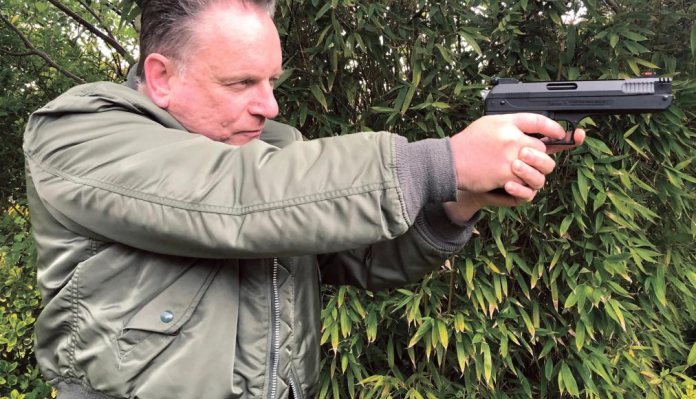 I’ve reviewed quite a few air pistols lately and I thought that it was about time I had a look at Weihrauch’s HW40; I first shot one when they first became available but haven’t used one since. Power to propel a pellet from an air pistol (or rifle) usually comes via a spring, gas ram, pre-charged air from a pump or dive cylinder or from a CO2 capsule. What makes the HW 40 different from the vast-majority of air pistols available, is that it is a single stroke pneumatic; this makes the pistol completely self-contained, requiring the shooter to put some effort into providing the power source. Weihrauch have been making another single stroke pneumatic, in the shape of the HW 75, for many years but that is made from alloy and wood and is considerably more expensive than this lovely little pistol that I have here. It looks a bit like the offspring of a Walther PPQ 9mm semi-auto, full-bore pistol (due to the grip) and a Desert Eagle (thanks to the ‘slide’).

One of the main reasons for the HW 40’s affordable price is that it is almost entirely made from polymer; however, that’s not to say that it’s a cheap and nasty ‘plastic gun’! Far from it, it is very well designed and made from quality materials often seen in the firearms field, where many pistols, rifles and sub-machine guns are made of similar materials. Incidentally, it’s the same sort of synthetic that Weihrauch use for the action of their popular HW 110 pre-charged rifle. The high-stress parts, such as the compression cylinder, pivots and trigger are all made from steel or alloy and there’s one of the company’s own, high-quality rifled barrels fitted.

The HW 40 consists of two main components, the lower frame that houses the grip, trigger, trigger guard and safety catch etc. and the upper that looks rather like the slide on a semi-auto pistol; it doesn’t slide however, as the top part hinges at the front and houses the quality barrel that I mentioned earlier. The blued barrel can be seen through slots either side of the polymer housing.

Starting with the lower, the grip is very ergonomic and fully ambidextrous, with eight tiny grooves around the rear and three, much larger, finger grooves at the front; the in-built trigger guard is almost vertical at the front, with five small grooves, which provide added grip for the weak hand’s index finger. There is what looks like a magazine release catch behind the trigger guard on the left, but the ‘40’ is a single-shot pistol, so there’s no magazine in the grip, despite the fact that there’s a moulded line that mimics a mag in position. The safety catch is real enough though and it’s a sliding, serrated alloy unit above the trigger. It sets automatically but can be re-applied at any time if it has been disengaged. Rear is SAFE and forward is FIRE, when a red dot is revealed. I found it best to slide it forward with the thumb of the weak hand.

That’s the lower then but I do think that Weihrauch have missed a trick here, as there’s plenty of room underneath the forward part of the lower for a length of Picatinny rail; this would be absolutely perfect for mounting a laser! I know that there are units that can be fitted to trigger guards, but a modernised version of this pistol could really benefit from this addition! Now, I wonder if those nice guys at Hull Cartridge will let me fit a rail under front of the action? If, so, I’d better fire up the Dremel! At the rear of the pistol, there is what appears to be an alloy hammer, but it is in fact a release catch and, when pressed, allows the ‘cocking lever’ to be lifted.

As soon as you lift the cocking lever, the safety catch automatically puts the pistol in ‘safe mode’ and you will then see the blued steel compression cylinder that is attached, via pivot, to the lower grip assembly. At the rear of the cylinder, there is an alloy transfer port that mates with the rear of the barrel in the closed position; a small O-ring is fitted around the end of the barrel, to form an air-tight seal when the pistol is fired.

To cock the pistol, the cocking lever is lifted and pulled forward; at about 45-degrees you will hear the trigger set. If the cocking lever is returned at this point you can ‘dry fire’ the pistol, which is great for practice – do not load a pellet though! In the fully open position, at about 170-degrees, a hiss is heard, as air is sucked into the compression cylinder. A pellet is loaded directly into the barrel and the cocking lever pushed back to compress the air inside the tube via the alloy piston. It might sound dangerous to be pushing the lever down with a pellet loaded but the auto safety makes it a very safe system.

Once the pistol is cocked, the shot can be taken by first sliding the safety catch forward and pressing the sweet trigger, which releases the stored, high pressure air; you then realise the benefits of this system, as the shot is recoil-free!

The open sights fitted are very good, as there’s a ramped foresight moulded into the top of the ‘slide’, with a red fibre optic style insert in the centre, which matches up with the similar, green dots either side of the rear notch. The rear can be adjusted for elevation and left/ right but everything lined up perfectly for me from the box. With the pistol rested on an FT beanbag, the pellets went pretty much through the same hole at 7-yards and, when shot twohanded, I was able to hit a 40mm spinner pretty much every time. There are grooves on the top of the cocking lever, so a scope could be fitted but I personally think that it would make cocking the action a little tricky.

As for cocking and loading, a certain amount of effort is clearly required to compress the air into the cylinder, but I soon developed a knack where I braced the pistol against my thighs when closing the two parts together. Pellets drop easily into the bore and the sights allowed for great accuracy and I’m sure a better shot could achieve really great results. Power is around 2¾ft.lbs, which is just about perfect for this type of pistol.

The Weihrauch HW 40 is a really high-class ‘handgun’ and I’ve really enjoyed shooting it and, at £155, it’s great value for money and very accurate.