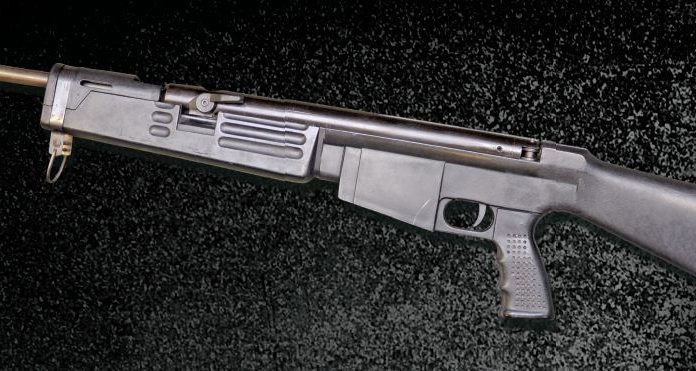 Maximum power was the key selling point back in the 1970s and 80s and the Jackal derivatives certainly hit the ground running. Its manufacturer, Sussex Armoury, was a big player at the time, and with the ever flamboyant Richard Marriott Smith at the helm, this most energized of companies brought a succession of exciting products to market.

With obvious military overtones, the Jackal range proved popular; finding instant favour with a sector of the market that appreciated such styling. A black, synthetic stock defined these models, and with overt military styling they cut a distinctive profile!

The action is traditional spring piston, and is cocked via the full length sidelever. Loading was by a flip-up tap system popularised by BSA’s Airsporter, which were all the rage back then, so its adoption must have seemed logical at the time. On show here is the Jackal Hi-Power, serial number 6045, in .22 calibre. The vast majority of the production run was in ‘.22 only’, although a few rare .177,s and even some .20s are to be found. Field open sights would have been fitted originally, and they have been removed on this model, and a barrel finisher fitted in their place.

Trigger wise. A pull weight of around 3lbs was about par for the course at the time, as is some resonance on firing from the hollow stock. Not the most sophisticated then, but fairly accurate, rugged and reliable. Sussex Armoury hit financial difficulties around 1982, which led to NSP Engineering - the company behind the Air Arms brand (just look at them now!)) taking over the reins.

Various versions of the Jackal featured during its lifetime, such as the Parabellum 2000, all based around the same power plant. The AR7 featured a super short barrel, whilst the Firepower 3000 was basically the Hi-Power, with an ingenious 30-shot, gravity-fed tube magazine system. It worked well too, as long as the correct sized round head pellets were used. Similarly, a more upmarket wood stocked version, the Woodsman, made an appearance, among others - all helping to refresh the brand and extend production to around 1990.

What to look for in second hand versions? Always check the alignment is true around the loading tap, and look for a smooth action here too. If power seems significantly down, check for air leeks by cupping a hand around the closed tap area on firing. Other than that, these super robust, knock about guns make a great collector’s piece. This featured Hi-Power is currently available from MGR Guns, for £250 and whilst it may show signs of a busy life, it undoubtedly represents an intriguing period for the manufacturer.