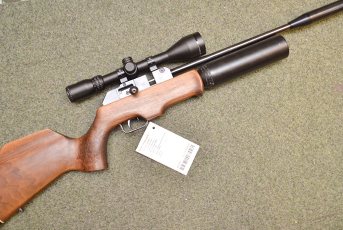 This month’s rifle comes as a timely reminder of just what the famous British brand of Theoben were all about. Quality engineering, bold, distinctive design, and a level of finish, including superb blueing, that few rivals could match.

Theoben’s Rapid 7 MKI was the company’s first stab at a PCP, introduced back in 1990, and since it broke with tradition offering as it does, the ‘buddy bottle’ configuration, it caused quite a stir. A ready market has arisen that simply loves this style of rifle, for its very unconventional approach.

Not to everyone’s taste of course, but the design does allow for a huge shot count, courtesy of the air bottle capacity. Several hundred shots are available before it needs filling, and that’s a big selling point for many.

This MkI Rapid at MGR Guns, comes supplied with a rotary magazine, walnut sporter stock, and heavy duty silencer- which closes the muzzle report down to a mere whisper. It’s in the more air efficient .22 calibre, and the gun carries the serial number 022208.

Cocking is via the chunky bolt handle- obviously the original ball design here; later changed to a tear drop, and the near bomb-proof build quality holds much of this classic model’s appeal. Charging requires the quaint routine of unscrewing the bottle a quarter turn. The gun can then be dry fired to expend any remaining air in the valve link. It is then fully removed for charging, before re-fitting.

When viewing any second hand example as a prospective purchase, inspect the thread on the bottle for deformation and wear. Similarly, check the function of the magazine, as Theoben’s system is great in operation, but dependent upon a central, rather fragile internal coil spring.

As for this example, it’s in fine shape, save for a couple of understandable nicks from the blacking on the buddy bottle, and some tiny blemishes on the barrel. Some unusual but highly effective stippling covers the grip, and the whole gun has that pointable, no-nonsense feel.

Of course Theoben as an entity, are now sadly no longer with us, which has of course benefited residual values of much of their wares. Word on the street is that something might rise from the ashes, but securing a slice of airgun history is the name of the game for many.

For the record, the asking price for this fine example, is £495.

Many thanks go to Andrew, CJ,  and Craig at MGR Guns, and for further details on this and other guns in stock, see their website at www.mgrguns.co.uk .