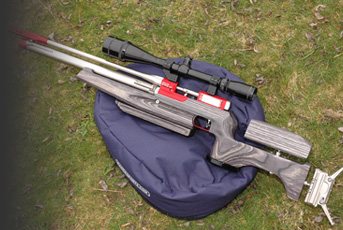 Over the 30 years that I’ve been involved with airguns, I’ve been privileged to have owned and shot many of the best rifles available, including a few dedicated ‘match’ models along the way. Yet the last few seasons have seen my outlook change; adopting a ‘keep it simple’ philosophy, certainly where my competition rifle was concerned.

OK, I mainly shoot Hunter Field Target these days, but I still take part in the odd FT event and expect to at least be competitive; ideally using the same rifle for both formats.

Having been mesmerized by the plucky little Air Arms S400’s performance, ever since buying one on a whim, and in turn, bolstered by results such as the South African who came third in the 2006 World FT Championships, using just such a rifle -  I went on to tell anyone who would listen (certainly my club members) about the qualities of this ubiquitous yet straight forward marvel (don’t get stuck with me in a lift!) and how paying more for a rifle probably wasn’t necessary.

I even won a few HFT rounds with it. Let’s face it - the S400 is good… very good… up to a point. Let’s not forget that the S400 was primarily designed as a hunting tool, so rifle’s with added finesse can smooth the path still further - and that’s where match grade weapons come in.

Air Arms registered an interest in this slice of the market virtually from the off; from their highly successful NJR FT rifles, through to the RN10, and Pro-Target.

It was a bold move indeed that saw the all new EV2 replace the lot a few years back, and I for one mourned the passing of that rather slick plastic sliding breech on the Pro-Target. Yet the EV2 undeniably looked the part. Early models did suffer in the reliability stakes, but this go-ahead British company is hardly known for resting on its laurels, and all the signs are that the EV2 is now the rifle it always should have been.

Last year’s European Field Target Championships, staged at the Midland Game Fair,  Weston Park, was a real eye-opener to me.  With all the top exponents of FT in attendance, and a sea of EV2’s in operation, I took the opportunity to canvas the owner’s club, and virtually without exception, they gave it the thumbs up. James Osborne went on to steer his EV2 to victory over that weekend, and results really are hard to dispute.

So let’s take a closer look at the very latest version of this proven winner, and see just what you get for the asking price.

Performance Right Out The Box

All the rumours are that Air Arms will be bestowing this rifle with the MKIII livery (well lettering) any day now, yet what you see here is pretty well what you’ll get; since my test rifle came complete with the very latest woodwork. All EV’s come supplied in a plastic hard case for added protection, which is a nice touch for a start.

The brand new features concern that stock; with basically an extended version of the adjustable ‘hamster’ now fitted plus ball joints incorporated into the cheek-piece and butt hook - more of which later.

Acclaimed airgun designer, Ken Turner was involved in the original EV2’s conception, but with much water under the bridge, the latest model has evolved, and is now largely a product of in house work, with Colin King being a major influence.

Modern match air-rifles from the top few manufacturers tend to reflect current fashions up to a point, with seemingly extreme styling to the stock, and garish colours found on the action. Yet with the EV2 at least, fashion has a basis in technical detail and performance.

Up close the EV2 is an undeniably stunning piece of hardware, but look closer still, and just about every area and feature has been arrived at with performance enhancement in mind.

The blueprint for this flagship model was always for a rifle that had been built with every conceivable ‘add-on’ supplied as standard. Swing-out spirit level; swing-out ‘windicator’, and a trajectory chart holder just to the left of the breech block, just about says it all. Straight from the box, this should be a race-bred rifle, with which to contend tournaments immediately.

With the introduction of the MKII version, came the visible laminate stock, and very attractive it is too. Whilst I still prefer the look of a beautifully grained piece of walnut, there’s no doubting the principle behind the use of specialized laminate. The process of bonding several layers of wood together, cutting the shape from the ‘blank’, then applying a strong weather seal, results in the most stable and durable form of competition stock available. Properly treated laminate should remain warp free, despite extreme temperature change, avoiding any possible shift in zero.

With PCP’s, small changes in the pressure of the main cylinder during the rifles use, can also result in a zero shift if the stock is in full contact with the cylinder, and to this end, the EV2’s action is secured solely via the breech block/trigger housing. With a significant gap between the inside of the fore-stock and the full length of the main cylinder, room for expansion/contraction is assured, and the integrity of the action and zero setting is maintained.

The match stock is intended to cosset and support the shooter, with ergonomics at the fore-front of the design. The EV2 has a fully adjustable cheek-piece, butt-hook and forend for standing support, so hours of playing with the settings await for those inclined.

The new ball-joints are a clever idea, allowing the individual to set, align and cant the cheek piece to exactly the right point for support and comfort. In the case of the butt hook, a multitude of minor adjustments (all carried out via solid allen-headed bolts) again allows the shooter to custom fit the rifle to his/her build and stance requirements. Most serious match rifles come fitted with an aluminium butt hook these days, and whilst this example produced in house by Air Arms, is superbly engineered, I still don’t get it! Why do we want metal plates at the shoulder as opposed to rubber?  Surely a well shaped sliding rubber pad would work as well and feel nicer. Maybe it’s just me. Anyhow, accepting that they’re all doing it, as butt hooks go, this is as good as it gets!

The newly revised, retractable forend hand support (or hamster if you must), has been extended to reach slightly further forwards than the original MKII version- a result of Air Arms constant canvassing of their top shots on the FT circuit. Again, chunky socket screws control the movement, and elevation can add significant height to the action. This section would come into play with the ‘over-the-arm’ FT position, or more commonly, be rested on the shooters knee for free-style shots. The approach to standing shots, can again be altered via this adjustment, until everything feels just right. My only gripe here would be that all adjustments require allen keys, rather than via an adjustment knob, which would be more user-friendly in the heat of competition. Accepting that these stocks are set and then left for the most part, the issue is minor.

Grip-wise, the all important thumb shelf is nicely shaped, whilst a slickly finished non-adjustable palm-shelf completes the stock spec. Anything they’ve forgotten? I think not!

The EV2’s action now gets treated to a rather special nickel chrome plating, a finish I have to say, finally in keeping with its status. This highly durable, rust-proof finish isn’t a cheap process, yet the benefits are obvious. The matt satin look, contrasts nicely with the colour co-ordinated action parts, which can now be ordered in black, red, or blue. My test model came supplied in red, and with the muzzle brake, valve cover, and trigger housing sporting the anodized colour, the style is eye-catching to say the least.

That rather swish muzzle brake acts as an air-stripper too, which all helps deliver the pellet to the target stress and turbulence free, and with the report fairly muted, I’d say the EV2 doesn’t waste air either. Air Arms quote a conservative 100 expected shots, yet my testing using Daystste FT pellets straight from the tin, clocked 135 all within 12fps which is superb by any standards. Charging the system to 200bar comes via the latest Air Arms ‘T’ bar valve, which is super-safe and filtered.

Trigger wise, the unit has been largely lifted from the Pro-Target, but since this is a no compromise, top-class match unit, that decision makes sense. Pull weights down to my rather obsessive 2oz benchmark are possible, which says it all.

As previously mentioned, the passing of that exquisite sliding plastic breech on the Pro-target, was a sad day indeed, yet the two part probe on the EV2, allied with the side cocking lever is arguably an even more satisfying piece of engineering artistry. Ok - I really should get out more!

One slight observation here though, concerns the slightly vague feel to chambering a pellet into the breech. Direct feed is the whole point of this configuration, to enable the shooter to ‘call’ a bad (i.e. loose/damaged/deformed) pellet, yet the pellet now feeds through an ‘o’ ring, and didn’t feel as positive in the rifling as I had hoped. Maybe this was just my batch of pellets, but a few samples were tried.

However, this observation apart, the accuracy, was as expected, on the button, and the superior, dead feel of the firing cycle was impressive. Ragged groups were easily come by at my 35yd and 45yd test ranges, although with this rifles track record, there’s little to prove.

With this latest EV2, the MKIII to all intents and purposes, Air Arms appear to have outdoor airgun tournaments by the scruff of the neck; the EV2 being an exquisite piece of design, impressively executed.

The only down side?... Well, if I’m to get this one past the wife, a few white lies may have to surface with regards to the price!