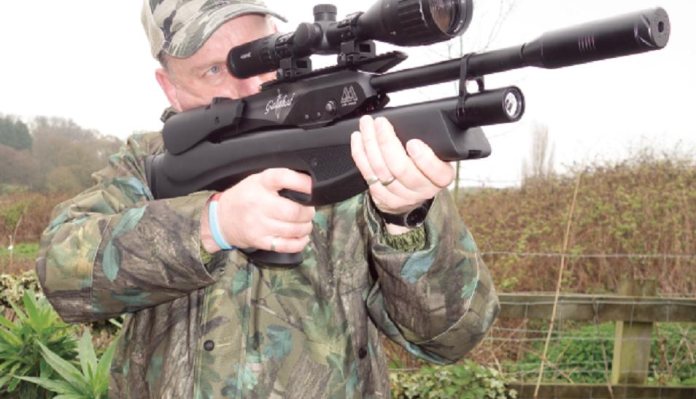 Air Arms were one of the companies that fought back against the German airgun invasion of the 1980s and 90s and their TX 200 spring piston air rifles took on their European competitors and won on the airgunning battlefields. They also began producing state of the art pre-charged pneumatic (PCP) rifles, such as the Shamal and the later 100 series that included the top of the range Nick Jenkinson replica Field Target rifle, the NJR. These rifles were popular with target shooters and hunters alike, both here and abroad and were later joined by current models such as the S200, S400/410, S510 and FTP 900 etc.

One thing that Air Arms lacked in their product range was a bullpup but that’s all changed with the introduction of the Galahad; and what a strikingly different air rifle it is! The heart of this new rifle is in fact quite familiar, in that it uses the triedand- tested valving from the 400 and 500 rifles, along with the incredibly reliable, 10 shot rotary magazine that has featured on so many of the company’s air rifles. The magazine has in internal wheel that pellets are dropped into but there are no springs to wind when doing it, as the rifle turns the rotor, via a clever little lifter mechanism when the action is cycled. Everything else about the Galahad is new however! Air Arms really have gone back to the drawing board with this gun but the overall layout of the action is the traditional barrel over air reservoir format; you will however see that there’s a gap between these two components and at first glance you may ask why it’s like that?

Well, the gap is to house the cocking linkages, because the rifle is cycled, not by a conventionally positioned rear bolt or sidelever, but by a ‘paddle’ on the left hand side of the forend! At rest, this cocking lever is parallel with the barrel and reservoir but if you push it down and forward by around 120-degrees, it activates the magazine system, loads a pellet into the breech and cocks the hammer – and all this takes place with the rifle in the shoulder and the firing hand still on the drop down grip! It really is a clever system, which is very intuitive and ergonomic in operation. Lefthookers haven’t been forgotten though, as the cocking lever can be swapped over to the righthand side of the rifle by removing a single Allen bolt — very neat! The Walther barrel is within a shroud and up front there’s a female ½-inch UNF thread for an additional silencer. What might initially look like a stubby barrel is in fact 15½-inches long, as it goes all the way back to the magazine at the rear of the rifle. Air Arms sent me a stubby little Q Tech silencer and it really suited the overall looks of the Galahad and really tamed the report on firing; with the silencer fitted the rifle is still only 32-inches (it’s 27-inches without). The shroud on the production rifle will be slightly fatter, so that gap won’t be quite as noticeable; it’s good to see that Air Arms listen to feedback.

Filling is via a plug in quick fill probe, as used on the FTP 900 FT rifle; the cylindrical cover is slid forwards to reveal the port and the probe inserted. A slow fill to 200-bar is all that’s required and once the dive bottle’s main valve is shut and the air bled, the probe is withdrawn and the collar slid back into position. A pressure gauge is fitted to the front of the reservoir, not my favourite position but that’s just me! 70-80 shots are available per fill in .177 without a regulator and 110 with a reg. fitted. In .22, those figures increase to 80-90 and 120 respectively. The ‘rifle’ version produces around 20 more shots in each calibre.

Scope mounting is taken care of on the test example by a Picatinny rail but a version of the Galahad will be available with a conventional ‘airgun style’ rail. The rail is 8½-inches long, plenty for any scope or even Night Vision unit. A small spirit level is at the rear of the unit, handy to prevent cant. I fitted a rather nice 4-14 X 50 AO Hawke Vantage IR and it suited the Galahad well.

The trigger obviously has a linkage to connect it to the rear of the action, the Galahad that I shot at the British Shooting Show had a very good, the example I have here (a prototype test gun) seemed a little firmer but I’m sure the full production gun with be very good indeed, like all Air Arms triggers.

That’s the action covered, so now on to the woodwork. The Galahad will be available with either walnut, beech or ‘soft touch’ black coated beech; there’s not currently a laminate option but I think Air Arms are missing a trick here, as this rifle’s radical stock design would be highlighted further by a laminate option. The stock is completely ambidextrous and the almost vertical grip is very hand-filling and chequered for a secure hold.

The forend is pleasantly shaped with a rounded belly and an angled tip; panels of chequering are found on both sides and underneath, where there’s also a short accessory rail for bipods etc. Moving back, the cheekpiece is subtle yet shapely and aligns the head perfectly with the scope, a comb riser is fitted, and there’s a slot on the left for the magazine. An adjustable buttpad is fitted and it can be raised or lowered by around an inch.

I only had the Galahad for a short time, as the factory needed it back, but it was certainly a pleasure to use! The cocking method was soon second nature and after a while I forgot about how radical this system is and just got on with hitting targets. Accuracy was up to the usual high-standard, thanks to the Walther barrel and the Air Arms Field pellets I was using. The tried and tested magazine system was faultless and I was hitting what I aimed at, so it certainly does its job. The stock is very comfortable and the rubberised ‘soft touch’ finish is very tactile.

There are a host of options available apart from the stock variations; regulated or unregulated actions, carbine of full-length etc. but the ‘base model’ as you could call it, i.e. the un-regged carbine is £1059. That’s a fairly hefty sum but I can see this radical air rifle being a hit, here and abroad. The look of the Galahad will change slightly when it goes into production, with a few tweaks here and there but what you see in the photographs is pretty much how it will appear in the shops.

So there you have it, the Galahad, yet another fine air rifle from Air Arms!