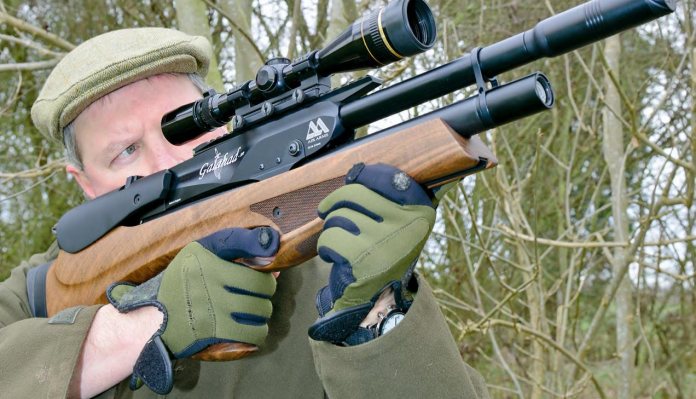 Okay, admittedly Air Arms did rather take their time before getting involved. ‘Conspicuous by their absence’ is indeed the expression. Yet to be fair, that’s how they do business. Properly assessing a market, doing their homework, and then putting their talented team of designers to work, to maximise impact. It’s a formula that’s undoubtedly served them well over the last few decades. No rash decisions, no quick fixes just calm, measured strategy.

And so, we have the Galahad; apparently, several years under wraps in the making – and for a pure piece of design work, it’s definitely a head turner. So, Air Arms finally entered the bullpup sector of the market, and in this curious, energised world, we have to expect the unexpected. Air Arms insist upon calling their latest baby a ‘Sportpup’, but get past the daft labels, and what we have here is undeniably impressive. For yes, the Galahad follows the bullpup format, a path now trodden by a growing list of manufacturers, yet in a crowded market place, those distinctive looks and Air Arms flair, give the Galahad a character all of its own.

At this stage, I’ll just state the obvious for the uninitiated, and clarify the bullpup approach. Basically, the entire action sits almost to the rear of the stock, and by so doing, largely transforms balance and handling. It’s a concept that has its origins in the military, but which is fast gathering momentum throughout the various shooting sports. Radical looks and radical handling.

Having spoken to the factory about the Galahad, it seems that pressure from the States among others, for a bullpup model, sporting the prestigious AA logo, was just too great to ignore, and the wheels were set in motion to respond, with something quite dramatic.

If you’re the type often racked with indecision, then the plethora of choices on offer with the Galahad will be enough to have you breaking open the valium drawer. This model can be specified as a full-length rifle action or Carbine, regulated or unregulated, obviously a choice of calibres, the stock can be specified in Walnut, Beech or Black Soft Touch, and the scope rails can be conventional dovetail or Picatinny. Blimey, a comprehensive spec sheet then! My .22 calibre test rifle came with a Carbine length regulated action, Picatinny rails and the walnut stock option, and first impressions are quite overwhelming, given the bold design on show.

So, what exactly do we get with the Galahad? Well, the all new action features side-lever cocking, the Air Arms 10-shot rotary magazine system, (two are supplied), a thumb hole stock with adjustable butt pad, a fully shrouded barrel with the option to fit a silencer at the muzzle, a quality two stage trigger, pressure gauge, and spirit level mounted to the scope rail. In keeping with modern thinking, the stock is fully ambidextrous, and with Air Arms designing the side cocking lever to be also easily switched from the left to the right side if necessary, left hookers are well catered for.

The quality of the Minelli made woodwork on my test model was exceptional, with perfect deep cut chequering on both the grip and the sides of the forend, as well as the underside panel; which all adds to overall feel, handling, and looks. The thumb-hole configuration is a satisfyingly flowing design, easy on the eye, but it’s the attention to detail that really impresses.

The stylish forend includes that recessed accessory rail, the butt sports an adjustable, perfectly concave rubber pad, and add to that the flared pistol grip forming a support, and we have a serious handle on any gun. Nick Jenkinson’s handiwork in the design studio, and it shows.

State of the art

Air Arms have, of course, invested heavily over the last few years in state of the art CNC machinery, and they seem to be keen to show off their capabilities at every opportunity. First came that gorgeous curvaceous breech block on their flagship FTP900; and now we have the Galahad, with equally pleasing aesthetics all of its own. Bullpups, by definition, require the scope to be mounted higher than normal, to counteract the way that we are effectively sighting over the action, rather than from behind it. Manufacturers use different devices to get around this, and Air Arms have decided upon a seamless, undulating breech block, rather than any separate ‘intermount’ over the barrel. Given the height, the inclusion of that small spirit level at the rear of the rails makes sense, allowing the shooter to keep an eye, and eliminate any cant that may be creeping into the equation.

Interestingly, Air Arms quote different fill pressures with this model, depending on the spec. All un-regged versions get the standard recommended 190-bar fill, whilst my regulated Carbine model gets prescribed 210-bar. The regulated rifle version is specified at 250-bar. Pressure can be checked via the gauge in the front of the cylinder, but encouraging the owner to look down the front of the gun can’t be a good idea; so, perhaps manufacturers should stick to the underside of the action for this necessary feature.

As mentioned, my Carbine model came with Picatinny rails, and this means appropriate mounts need to be used. The advantage is that scope location can be precise and super secure; although maybe overkill on a PCP. Anyhow, you have the option!

Getting air on-board is via the probe design, identical to the FTP900, and the 20-micron filter valve is exposed by the push/pull cover at the front of the cylinder. Crank up the pressure, remove the probe and close the cover. Simple. Now we need to fill the magazine, and this means getting familiar with that unusual side-lever. I say unusual- it’s actually perfect, and shows the level of thought applied to the Galahad. Pull the lever down and swing it forwards to cock the action. Now pull the magazine free from the left side, and fill each chamber in turn with a pellet. Snap the full mag back into the slot within the cheek piece, pull the side-lever back up, and this now cycles and indexes the first pellet. Subsequent cocking of the lever, pushing down and forwards, then pulling back and up again, cycles each shot in turn.

Air Arms sent me through one of their ‘Short Q-Tec silencers’ for the test, and this I duly screwed into place via the thread at the muzzle. A neat blanking cap protects the muzzle and you can of course shoot the Galahad with no add-ons.

The first thing I noticed with the Galahad was how slick the operation was; as the side lever is perfectly positioned in the middle, so that the action can be repeatedly cocked and cycled, with the gun still mounted in the shoulder – an operation simply not possible with several rival bullpup designs currently available. Everything just feels well-engineered, and slick to use, and the magazine cycled faultlessly on test. One reservation, and this concerns the majority of bullpups I have tested, has to be that I still don’t like having the breech/magazine area so near the face. In the case of the Galahad, Air Arms do at least provide a civilised black soft touch cheek piece, and it all feels very comfortable I have to say.

Muzzle noise with no silencer fitted is quite a crack, but the Short Q-Tec does considerably reduce this; although not as effectively as a larger model. Over the chronograph, using Air Arms’ own Diabolo Field ammo, I clocked up 105 shots within a very creditable 21fps total spread, and whilst there are more shots to be had, it makes sense to keep within consistent bands. From the full-length regulated version, expect around 140 shots.

The Galahad pretty well falls into line balance wise, where the accepted bullpup spec is concerned, with centre of balance bang on the pistol grip. Get the set-up right, and performance will follow. That multi-adjustable butt pad can be offset as well as set for height, and this is worth spending time with, as further lateral adjusters are accessible underneath the main pad, once unscrewed. From a rested, prone position over 30-yards on test, this model will ragged hole all day, and predictably, from the kneeling position, I could still maintain impressive accuracy, even out to 40- or so yards- admittedly helped by the quality two stage trigger. Standing shots are where I find I would need more weight up front to stabilise, but that’s to perhaps miss the point of the super compact bullpup layout.

By the way, if you fancy a .25 calibre version with FAC power levels (rifle length), then that’s also part of the options list.

In short, the Galahad is the culmination of an amazing design project. It looks stunning, is thoroughly researched, cleverly executed, and has all the performance and pedigree that we have come to expect from such a quality brand. Of course, it won’t be to everyone’s taste, (bullpups, sorry, Sportpups always divide opinion) but for devotees of this specialised configuration, and anyone after an ultra-compact hunting tool, with superb build quality, this model leapfrogs most of the opposition, onto any shortlist.

A bullpup configuration then but with Air Arms’subtleties in engineering, refinement, and performance. Yes, the Galahad has been well worth the wait.