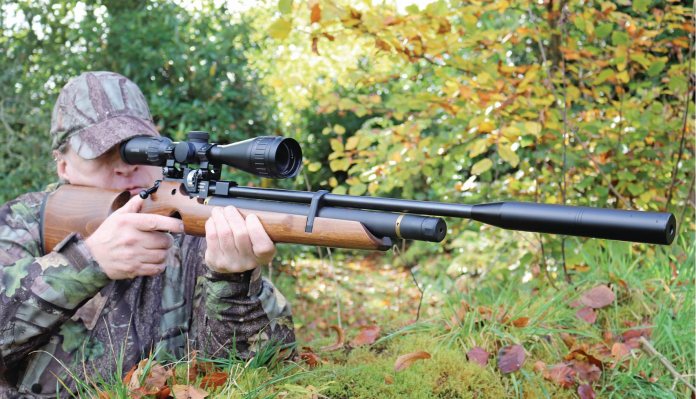 The S200 has been a huge success for Air Arms. Yes, it seemed out of the blue, from CZ Brno they brought us an accurate, lightweight and affordable PCP that suited smaller stature shooters. When launched nobody could disagree with certain elements; the stunning accuracy potential, affordability and ease of use. Even so, many like myself felt it looked a tad ‘flimsy’ for heavy-duty hunting and thought it better suited junior shots, dedicated plinkers or those looking for an introductory rifle for FT/ HFT. However, Air Arms have upgraded the stock and offer an aftermarket, retrofit, 10-shot magazine system. The S200 now takes on an individual identity that’s well worth investigating.

The Minelli manufactured ambidextrous beech stock is unique looking, has a mid to dark-brown stain and appealing grain. There’s no conventional cheekpiece as such, rather a straight raised comb, which makes for a surprisingly suitable headrest. This is neatly finished with a slim, black, rubber butt pad. The steep drop down flat-sided pistol grip allows for a thumb up or over hold thanks to the very exaggerated scalloping above, plus it has a nifty little thumb rest incorporated into the design. This unusual but useful shape at the neck gives a very comfortable and stable hold.

There are generously sized single panels of stippling applied on either side of the pistol grip which are a useful addition due to the stock being so slim. The equally skinny forend is quite lengthy in relation to the rifle but due to its overall size offers enough wood for even adults to achieve a comfortable leading handhold. The underside is nicely rounded but in the hold, the rifle does tend to feel overly slim. The stock tends to make the rifle feel a tad ‘junior’ but in its defence, it does manage to allow the S200 to handle and balance remarkably well. In fact, it used to come with a two-part stock so in that respect the full piece furniture it now wears is head and shoulders over the original.

There are two methods of charging this rifle - either by the connection point under the screw-on dust cover or by simply unscrewing the whole reservoir and replacing it with a pre-filled one. This is a ‘leftover’ from the S200’s target origins.

Once the cap at the front of the air reservoir is unscrewed it reveals the safe and familiar fill point Air Arms use for all of their PCP’s. This being a chunky stainless steel fill valve housing with a ‘T’ bar shape securing point for the brass push over fill adaptor to securely mate up with. The rifle takes a 190bar fill which will give 45+ full power shots in the small calibre and 55+ shots in .22 (on test).

Now, in the past, I’ve bemoaned that loading the single-shot version of the S200 was a tad fiddly due to it having a relatively narrow/ short loading channel. Obviously that’s not the case if you fit the company’s 10-shot magazine conversion. The S200 does not come from the factory with the multi-shot unit fitted, the retrofit kit has to be purchased separately and costs £99.

On reading the comprehensive instructions included with the kit, using the Allen keys supplied and a crosshead screwdriver, I had the single turned into a multi in approximately 15mins, and it worked a treat straight from the off.

So, quite frankly, follow the instructions and fitting the mechanism is within the capability of even the most hesitant DIY-er. If unsure though, any reputable airgun-smith will gladly oblige!

So back to the rifle and how it operates as a multi-shot. Here you’ll notice a difference from most other magazine fed rifles as the removable inner alloy drum that holds the pellets needs to be fitted into the rifle in a certain way. There’s a key slot machined through the inner rear-facing spigot of the magazine which needs to be lined up to slide over the ‘key’ in the body of the magazine housing. Once you’ve loaded 10-pellets into the magazine (with the spigot facing you), ensure the rifle’s small blacked ballended cocking bolt is turned up and pulled fully rearward where it locks in place. Then line up the slot with key and slide the magazine into the housing. Push the bolt forward and a pellet is probed out of the magazine straight into the breech. At this stage, the rifle is cocked and loaded.

Once you take a shot, pull the cocking bolt fully rearward and the magazine is indexed around anti-clockwise to the next station, push the bolt in and you’ve another pellet ready to go. Now it’s at this point you’ll either like the system or it’ll infuriate you. Although you can remove the magazine at any time, you need to pull back the cocking lever and manually rotate the magazine around, so the key slot and key are once again inline. If shooting to the point of an empty magazine, it will on the last pellet fired, slightly dislodge in the housing and the action won’t allow you to push the cocking bolt fully forward again.

For scope fitting, there are three separate mounting points on the top of the rifle. Two are machined along the action whilst a third, positioned forward, is a block that can be moved back or forth as required. This movable mounting block is held securely in place by two small grub screws. This setup allows for a wide range of scope mounting options so no worries for positioning optics with short or long body tubes. However, the body of the multi-shot conversion assembly sits quite high from the action, so any scope will require high mounts. I fitted a Hawke 4-12x40 AO Airmax which proved well suited to the size of the S200.

As for the trigger unit, there’s so much adjustment available that this must rate amongst the best singlestage trigger units currently available. I say single as the trigger isn’t a true 2-stage unit, although for argument’s sake can be rated as such. However, it’s adjustable for angle, pull weight, travel and you can even increase or decrease the distance from grip to trigger blade. Talking of which, the plastic blade is a strange-looking cookie with a profile rather like an inverted teardrop with only a slight curve.

The rifle’s precision match grade tube is given extra security towards the front where it’s supported by a generous ABS barrel band. It comes fitted with a muzzle weight, which hunters will soon remove and as I did, exchange it for one of the company’s own calibre specific Q-Tec sound moderators. The can slips onto the barrel spigot and is so well designed that the tapering of the rear of the moderator meets up almost perfectly with the outer diameter of the barrel it sits on.

Air Arms really have come up trumps with these new moderators, which are available for all the airguns that they manufacture. As I’ve now experienced virtually all of them, I can certainly attest that they are amongst the most effective moderators I’ve used on PCP’s.

So how does it place pellets? Well, there is no other way around this than to say it’s scarily accurate. Use quality ammo and pellet lands on top of pellet at 30 yards and groups don’t open up much out to 45 yards. Performance is so impressive that the S200 even makes a mockery of some so-called superguns costing twice its price.

It pretty much goes without saying that the Air Arms S200 Mk3 single-shot PCP is the optimum choice for a newcomer or youngster to the pneumatic power source. Now you can convert it to a multi-shot, that conversion kit is a godsend for those who already have the rifle and don’t really want to change what they’re used to. If buying from new, for those who prefer a singleshot action, the S200 is a fine option if of smaller stature. However, when you consider the cumulative price of rifle, conversion kit and silencer there is now a host of true multi-shot PCP’s at around the same price point vying for your cash. Having said that though, the quality and performance of this diminutive PCP is something not easily ignored. Many thanks to T & J. J McAvoy LTD for the loan of the test rifle.