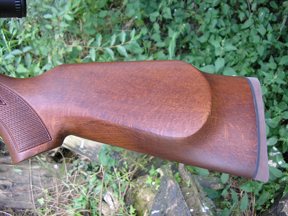 As so often is the case these days, choosing top class airguns often comes down to a choice between German and British products. This test reviews two top class spring rifles from these countries, and also compares their different cocking actions.

From Germany we have Weihrauch’s world famous HW80 hunter, a break-barrel rifle with a well founded reputation for solid, dependable engineering and no-nonsense approach to getting the job done with style. Pitched against this powerhouse classic is the rather refined under-lever cocking Pro-Sport; a fixed barrel rifle that epitomizes South Coast based Air Arms’ go-ahead approach to a demanding market.

Whilst the HW80 was primarily designed as a hunting rifle, it did actually have its fair share of success in the early days of FT, which obviously speaks volumes for its inherent accuracy.

By the time the Pro-Sport hit the shelves, its established stablemate, the TX200 (the rifle on which the Pro-Sport is based), had already made a name for itself, taking several spring-rifle FT championships and a haul of silverware.

So what we have here are basically two top class spring powered rifles with pedigree; equally at home in a hunting scenario, or HFT course. Let’s take a closer look.

It’s All In The Detail

Keeping true to its break-barrel fore-bears, the ‘80 just raises the game somewhat.  Designed with one eye on the FAC market, the ‘80’s oversized compression cylinder means 20plus ft/lbs is fairly easily attainable for those with the knowledge and legal documentation, so with this potential for customisation and tuning, the ‘80 is clearly under-stressed at non-FAC velocity (under 12ft/lbs).

If the weight of 8.8lbs (the carbine ‘k’ version trims this to 8.6lbs) doesn’t put you off, then the HW80 represents a quality investment. Quality is timeless, and with a quality barrel (Weihrauch’s own), a consistent power plant, and a decent trigger, the current model is still a force to be reckoned with. It’s more than that in fact – it’s still virtually the market leader for a conventional break-barrel, spring-powered format. My test model was supplied in .22 by the way.

OK; this is a slightly unfair test, since the rather bland beech sporter stock of the HW80 hardly compares with the tasty timber of the Pro-Sport; yet it handles well, and is comfortable in the aim, despite that rather low, lack-lustre cheek-piece.

For contrast just feast your eyes on the ProSport. But first, let’s start with an intriguing poser. What’s the best looking air-rifle EVER? Well although obviously subjective, I would say it has to be the humble old BSA Airsporter – now long discontinued. What you get with the Pro-Sport is the rifle that the beautiful Airsporter always should have been. The comparison stems from the fact that the under-lever on the ProSport is fully recessed into the underside of the forend (as was the Airsporter’s) with no part being visible from a side profile - all rather neat, and the main reason for that sleek, classic shape.

The Pro-Sport has heavily benefited from the input of top airgun design engineer, Ken Turner, and displays an array of features and detailed specification to justify its fairly high price tag. This is no standard run-of-the-mill ‘springer’, moreover it’s a piece of real craftsmanship, crammed full of technical wizardry to make it a modern classic in its own right.

My only criticism of the woodwork is the omission of a thumb shelf at the back of the pistol grip.  I’ve just grown so accustomed to the ‘feel’ but it’s a minor point. With socket headed screws keeping everything in place, attention to detail doesn’t come much better than this.

One obvious feature that separates these two rifles is the fact that Weihrauch see fit to kit out the ‘80 with quality open sights, whilst the Pro-Sport wouldn’t dare let such ugly protrusions interfere with its profile.

Both rifles cry out for some quality glassware of course, and if hunting is to be undertaken, then the quarry deserves maximized accuracy too.  If open sights are your thing however, then the ‘80 even has a fore-sight with interchangeable elements.

I’ve always been obsessed with good triggers from early on in my shooting career, and it’s always slightly grated when I’ve heard the old line trotted out that ‘it’s only a sporting rifle, so a basic sporting trigger is good enough’. Thankfully neither Weihrauch nor Air Arms adhere to this nonsense, and both these rifles come with superb sporting units, capable of fairly light settings. The Wehrauch’s Rekord trigger unit is an industry standard for springers, and the Pro-Sport’s ‘CD’ unit is equally impressive, with its gold-plated blade adding a further touch of class.

Most Weihrauch’s are available in full length rifle (being the model supplied for this test) or the shorter ‘k’ carbine version which comes fitted with Weihrauch’s own silencer as standard. The ProSport is fitted with a smart, streamlined 9.5” ‘bull’ barrel which incorporates an integral silencer, with its mass helping to add much needed front weight. Finish to all the metalwork on both rifles is exemplary.

One of the benefits of the HW80 over its older brother the HW35, was the introduction of a single piece cocking linkage. The old 2-piece articulated affair fitted to the HW35 resulted in the loud and infamous ‘Weihrauch click’ as the rifle was cocked, which was an unwanted feature in the field. This combined with a shorter stroke yet more swept volume gave the HW80 a serious edge over its stable mate, and its future was assured. The breech is also adjustable for wear, should it become necessary - and further evidence of Weihrauch’s attention to detail.

Putting The Power In

Cocking both these rifles is maybe an adult affair, but as always, technique is the key. The HW80 requires a reasonable amount of effort; especially to break the barrel, but if a positive sweeping stroke is adopted, it’s a perfectly manageable task. Reassuring noises accompany the cocking of the action, as the automatic safety catch and trigger engage. The safety button is easily thumbed off on the left hand side, although the automatic feature can be a little tiresome.

To cock the Pro-Sport, the under-lever is just pulled gently down from its recess, then pulled all the way down to engage the piston, and set the safety catch. The effort required is again reasonable and more a question of technique.

Cocking the rifle generates a series of satisfying clicks and clunks; reminiscent of the Whiscombe hand built special, and with the piston running on synthetic bearings, a smooth action is assured. One slight gripe is that I sometimes found that the action had been cocked, yet the safety catch had not engaged. You know when this has happened, as the under-lever does not fully return flush. It just needs the lever to be drawn down in a more positive manner. If an all-in-one, downwards stroke is adopted, then everything is fine.

Once the cocking lever is pulled right back, the breech is exposed and a pellet can be directly chambered into the barrel. Another clever feature here is the cut-out in the bottom of the breech well. Normally, in this style of rifle, if a pellet is dropped in the breech, it can often get stuck or crushed. With the ProSport, the pellet will simply drop straight through the bottom and out of harms way – comprehensive design brief or what!

Firing the HW80, the mechanism was crisp and slick with little spring resonance. It therefore came as no surprise that once the favourite pellet had surfaced, the accuracy would flow. Over 30yards – the average range over which this sort of hunter class will see action, I settled down for a testing session - first with Dynamit Nobel Superdomes, then JSB’s.

The ‘Domes just felt a little loose in the barrel - sending the odd flyer here and there, but the JSB’s located into the rifling perfectly, and the cloverleafs soon formed. Individual models may vary, but this one just loved them - and with 5 shot groups of just 5/16inch regulary forming, the bunnies had better watch out! At 45yds the groups were 3/4inch, which is highly creditable.

Over the chrono both pellet brands gave similar consistency over ten shot strings: ‘Domes - 19fps, and JSB’s - 18fps, quite acceptable, but with a fine spray of oil showing on my monitor, I would expect the consistency to improve after a run-in period.

The Pro-Sport, as expected, compared favourably with the HW80, although the chronograph revealed some interesting figures; with my perfectly decent batch of JSB Exact pellets returning a surprising variation of 27fps over 10 shots, yet Crosman Accupels paired this right down to a superb 9fps – proof if it were needed, of the fussy nature of airguns where pellet compatibility is concerned.

The JSB’s still grouped quite well, and at 30yds posted less than ½ inch, but the Crosman’s shaded the accuracy test too with a 3/8 inch group at 30yds, and sub ¾ inch at 45yds; which incidentally, was recorded in a cross wind that simply wouldn’t go away! In ideal conditions, I know the groups would improve, yet the results are impressive full stop.

The firing cycle is a slick muted kick, and about as good as a spring rifle gets – straight from the box!

In a world of change, it’s reassuring to see traditional quality products such as these two guns, still largely shining the way forward.

Imitation is the sincerest form of flattery, as they say, and with a raft of impostors copying Weihrauch’s profile, any novice could be forgiven for being confused. A few shots soon reveal the gulf in quality however, and whilst the HW80 isn’t cheap, if a quality break-barrel springer’ is required, then this is the real McCoy.

In the ProSport, Air Arms have a top class performer that looks the part too. Suitable for any task asked of it, it’s accurate enough for FT /HFT and hunting forays.

Choosing between these two rifles largely comes down to budget, your preferred cocking method… oh and the fact that the ProSport is surely one of the best looking rifles on the planet!