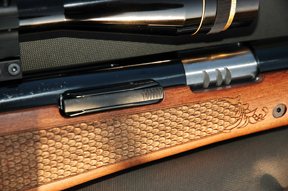 When Weihrauch introduced their now legendary HW77 model around 1985, they took the Field Target market by storm. Prior to this landmark event, the top competitors had ‘made do’ with the best of the quality break-barrel designs at the time – Feinwerkbau’s Sport 124; the Weihrauch HW80, Anschütz 335 and the massively proportioned Original 45. All great guns in their day, and all capable of superb accuracy out to FT ranges. Yet all shared that one potential drawback in the design – the break-barrel system itself.

My own Airmasters modified FWB was a fantastic gun, accounting for a significant haul of silverware over the years – but even this fine example of engineering excellence finally succumbed to its basic inherent weakness after extensive use, driving me to distraction in the process, as tiny shifts in zero crept into the equation.
A succession of scopes were blamed, until the problem was correctly diagnosed – the barrel was no longer locking up to an identical point within the breech. With today’s fine tolerances, the problem is largely eradicated, yet piece of mind is the name of the game for any budding competitor.

Enter the HW77 – literally a Godsend to us FT aficionados. A fixed barrel and repeatable consistent accuracy topped the brief, and didn’t we just love it! Custom tuning houses loved it too, with Airmasters and Venom modified versions fighting it out all over the country.

Weihrauch ruled the roost and pretty well had it their own way for some time, but Air Arms - a home based company down in leafy Sussex - was planning a fight-back with their TX200. Better late than never, and with master airgun technician and designer, Ken Turner, roped in on the project, it had success written all over it. The Air Arms’ TX200 quickly established itself as a match for Weihrauch, admittedly following largely in their footsteps, yet pushing the concept to its limits, and building in added refinement along the way.

What we have here are the very latest incarnations of the theme from both companies in a head to head test; from Weihrauch, the HW97k and from Air Arms, the TX200.

The HW77 itself is still available, yet the HW97k takes the system further, coming ready fixed with a better defined cheek-piece among other features, along with an integral silencer. Since most customizing outfits were fitting dedicated integral silencer/barrel catch arrangements to the original HW77 as part of the overall upgrade, it was only natural that Weihrauch felt that they may as well get a piece of the action and fit their own factory produced extras from the start. The HW97k embodies this ethos, offering the discerning shooter the highly successful main action from the HW77, with a shortened barrel capped off with an integral silencer.
For the uninitiated, let’s take a brief look at the basic system itself. That parallel bar running underneath the barrel is actually the under-lever, hinged at the breech and retained at the muzzle via a spring-loaded catch.

The cocking cycle is as follows: the under-lever is unclipped by pressing the button - cleverly masked as a dummy barrel tip on the 97k. The lever is then drawn down and pulled right back until the trigger sear engages and the rifle is effectively cocked. Drawing the lever down pulls back the sliding breech at the same time, exposing the loading chamber and giving direct access to the barrel. An automatic safety catch is fitted and falls perfectly under the thumb for easy release when ready to take the shot.

The TX200, given that it took its inspiration from it’s German rival, follows an unsurprisingly similar pattern. With the TX however, the under-lever is purely retained by a spring loaded ball détente at the muzzle. Whilst this is slightly less fiddly to unclip from shot to shot, it should be noted that in the absence of a positive retaining clip, the fitting of sling swivels could prove problematic; with the lever possibly wanting to unclip under the strain. Fitting the front swivel as near to the breech as possible may just suffice, but it is something to bear in mind.

The crisp little safety catch button is in the same place as the Weihrauch, falling to the thumb at the end of the main compression cylinder. Safety is an essential feature on both these rifles due to the loading method (your fingers will at some point be in the loading port) and is more visually evident on the Air Arms with the provision of the ‘Safe-Lok’ system. If you look closely, the exterior of the steel sliding breech displays tiny ratchet notches. These engage with a tooth on the side safety bar at various stages of the cocking stroke; effectively holding back the piston. When you consider the significant poundage just waiting to fly back under spring pressure, you really don’t want any digits to be at risk whilst fiddling in the loading port - so any additional safety aid is a bonus in my book. Weihrauch also include an ‘anti-bear trap’ integral safety system, meaning that the rifle cannot be de-cocked without actually firing off the shot.

Triggers are always of interest to me on quality rifles, and it’s recognized as a much more demanding task to produce a refined unit with a light pull on a spring-piston rifle, when compared to a pneumatic. The sheer poundage that a trigger unit has to overcome on a recoiling gun can be considerable, whereas there’s really no excuse for a poor unit on any pneumatic design; unless production cost restraints are an issue.

Since both the TX200 and the HW97k are pretty well market leaders in their sector, it would be a surprise if they had anything other than reliable units in place. The HW97k carries on Weihrauch’s proud tradition and sports the grand old ‘Rekord’ trigger, with the only difference being that the blade itself is treated to a gold anodised finish -  and jolly smart it is too! The ‘Rekord’ unit has always been regarded as something of an industry standard; and whilst not a true match set-up, it’s about as good as sporting triggers get. The genuine two-stage mechanism gives plenty of adjustment, and when set correctly, it takes some beating.

The TX200 utilizes the Air Arms ‘CD’ (computer designed) trigger unit, which is every bit as good as the ‘Rekord’- crisp, fairly light and clean breaking.

Both rifles carry top quality barrels – Weihrauch use there own, and Air Arms use a Lothar Walthar; so accuracy is assured as far as the tubes are concerned.

So we’ve established that these two heavyweights have the solid mechanics in place to do the job. So what about the woodwork?

The HW97k, despite having it’s roots firmly tied in with the ‘77, really does have a character all of its own. The stock is a vast improvement, even managing to make the HW77’s timber look a little vague.  Since Weihrauch took the bold decision to market the 97k with no open sights whatsoever, it allowed them to be positive with the stock design, with the result that the cheek-piece is far higher and more prominent than on previous models; offering perfect alignment for the scope. Indeed the timber on show for this test rifle is the very latest, incorporating fabulous, swirling panels of cut chequering, in a distinctive pattern; all rather similar to Weihrauch’s Bavarian version of their HW100 PCP model.

Air Arms offer a slightly more curvaceous package, with their latest TX derivative dressed to kill in the very latest HD (High Definition) woodwork. This stock woodwork underwent a serious face-lift towards the tail-end of 2006, and the results are stunning to say the least. Unlike Weihrauch, Air Arms supply the TX in either standard or custom grade. Ironically, the beech stocked version has been so striking in some examples that I’ve seen, that it looks like a fully blown custom stock in its own right.

The key feature of the new stocks is the ‘fish-scale’ HD chequering – an eye-catching design with greater relief in the surface, providing superior grip and real style. The chequering creates some interesting colour contrasts depending upon the wood used.
With the fore-end treated to a subtle curve on the underside, a nicely rounded tip, and a refined grip, capped off with rosewood – these stocks have taken the TX range to new heights.

Two classy guns indeed; so let’s see how the mechanics fair under closer inspection. Both rifles are in .177 calibre and I’ve tested them with JSB Exact pellets and also a sample of the new Weihrauch FT Special dome–headed pellets (made by H&N), kindly provided by Hull Cartridge along with the 97k. These latter pellets consistently weighed around 8.8grains.

First up was the 97k, and energy was unusually low for this model at 10.1ft/lbs with Weihrauch pellets (10.5ft/lbs with JSB), but the variation was reasonable at 23fps over ten shots. This is not unusual as power will increase as the new gun is ‘run in’. The TX came in spot on power wise straight from the box, with 11.3ft/lbs (Weihrauch pellets), and 11.6ft/lbs (JSB pellets).

On the range the Weihrauch felt solid and well engineered – every inch a thoroughbred. The actual firing cycle was crisp and more of a refined snap with no spring twang whatsoever. Accuracy followed, and a ragged cluster measuring just less than half an inch at 35yds reminded me why the ‘77 had been so dominant back in the ‘80’s.

The TX didn’t disappoint either, and with nylon bearings causing the piston to glide, a refined, tuned feel is what we have come to expect. It didn’t like the German pellets though, and they seemed much tighter in the TX barrel, but over the same 35yds, a competent group of just over half inch was soon on show with JSB pellets. It should be noted that the TX is slightly easier to cock, given that slightly longer cocking stroke, although both guns are perfectly manageable.

What we have here are simply two of my very favourite spring-powered airguns; perfect examples of two manufacturers at the top of their game. The only possible drawback with either is the weight, making them strictly adults only.

Both guns represent something of an investment – in quality engineering and great performance, lending themselves to further customisation/specialist tuning further down the line.

Making a final choice is the tricky part, but one things for sure – they’re a class act and capable of taking on any challenge, whether hunting, HFT or even recoil class Field Target.