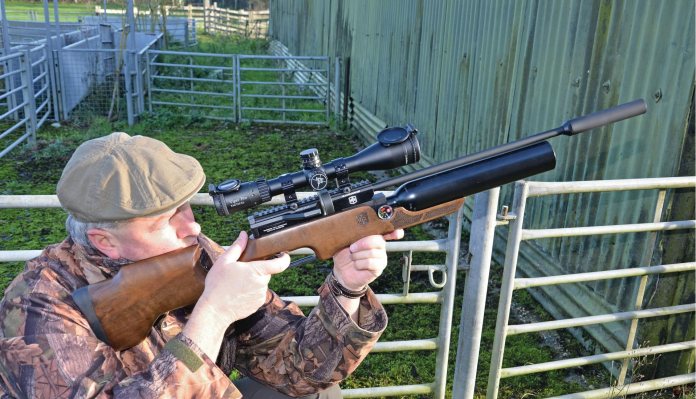 My knowledge of ATA Arms as a company, before this test, was pretty well zero. Yet as it turns out, they are one of the premier manufacturers, primarily of shotguns, in Turkey. I first became aware of the brand when I stumbled across a rather striking PCP airgun, amongst a rack of new product lines, on Sportsman Gun Centre’s (SGC) stand, at the British Shooting Show. Amazingly, that was back in February 2020, and though it seems hard to believe now, yes we did manage to sneak a show in, just before all manner of corona mayhem and nonsense ensued!

SGC are the UK importers of the ATA Arms brand, and as ATA has branched out into other sectors of the market, both firearms and airguns, there’s some exciting products making their way to the UK.

The manufacturer’s first airgun, the Airborne, is a pre-charged pneumatic, and where first impressions are concerned, it’s difficult not to be overly effusive. Let’s start by saying this really is some airgun for the asking price of £400! And no, that isn’t a misprint.

ATA provide a nicely produced instruction booklet with this rifle, and inside it describes a regulated and non-regulated model. Ah, that’s it, this is obviously the unregulated version? Er- no. I had to make a quick call to SGC to check of course, but they revealed that everything currently supplied comes regulated! Wow; that crazy asking price just got silly!

What makes it quite so silly is that you only have to pick up the Airborne to realize that it’s rather well made, and impressively finished. Everything is silky smooth, and all visible engineered components look pleasingly precise. We are talking strictly adult fare here, at 9.3lbs unscoped, this is a bold piece of kit to carry around for any length of time.

The chunky action appears to be black anodized, whilst the 18.75” barrel gets an ultra matt coating and is threaded at the muzzle. The moderator that comes as part of the deal, is again nicely made and gets the same matt finish as the barrel. Spin it into position, nip it up, and this ATA looks like a purposeful beast.

Turkish Walnut always helps, but the woodwork here really is tasty, with plenty of attractive grain showing through the subtle matt lacquer. We can’t really call it chequering on the forend and grip, since if you look closely, there’s no cross pattern at all, but instead, the manufacturer’s name, ATA Arms, perfectly laser cut in continuous text panels. Super neat and very effective!

There seems to be a slight obsession with Picatinny style rails on airguns at the moment, and whilst I appreciate it caters for fans of military spec hardware, the belts and braces approach that it supposedly affords simply isn’t necessary on PCP airguns, where recoil is almost nonexistent. Anyhow, source the appropriate mounts and this model offers a large platform for mounting options regardless.

Whilst there is just enough clearance in the breech to feed the Airborne single-shot style, there are as mentioned, two magazines included. Sorting them was my next job.

The mag holds 12-shots, and feels very much like the old Theoben design, being of the plastic cassette variety. These mags feel unusually robust too, and the filling process is pretty simple. Twist the clear plastic front cover clockwise against the spring pressure, all the way around, then whilst holding the cover in place, insert one pellet skirt first, into the one exposed chamber at the rear. This will hold the central drum in place, and a pellet can then be dropped headfirst into each chamber in turn from the front.

Once full, the magazine can be slotted into the action from the right side, where the small magnet will assist it into position. That’s a clever idea, now where have I seen that before?

And so to charging the system. The user gets a nicely produced instruction booklet with this model, and as with any PCP, it pays to doublecheck maximum fill pressure on safety grounds as much as anything else. That sizeable 545cc buddy bottle would take a while to fill from scratch to the specified 220bar, so I used a divers bottle as opposed to my trusty pump. This sped up the process since the gun had been delivered empty.

The good news is that the manometer has nice clear markings, is colour coded for safe parameters, and happens to be perfectly positioned on the side of the action. Lay the Airborne on its side, and the filling valve can be accessed on the underside. No cheap plastic bung here either, it shows a finely machined threaded cap, knurled for grip. How much was this gun again? Unscrew the cap, snap on the Foster adaptor, and slowly begin the charge.

So what’s it like to shoot? Pick up and point the Airborne, and the fact that it is front heavy will win many fans, myself included. As for fit, I’ve got a large frame and build, yet that tasteful, extended forend works well, keeping the supporting hand well away from cold steel. The cheek piece is a bit bland in shape, although it does offer support, but I really like the thinned down pistol grip.

In use, the side-lever feels high grade, being a solid piece rather than hollowed out as per some elevated rivals. Cocking effort however is a bit more than you would expect, yet cycling the magazine proved slick and faultless throughout my test period.

Another minor negative is the trigger, which, despite looking rather swish, is actually somewhat simple in operation. It lacks fine adjustment, with one single adjuster for ‘slack’, and in use is a little heavy, given the pneumatic action. Hold on though. Brain into gear, we’re talking £400 quid. They have to save production costs somewhere!

Right, time for some number crunching. That huge onboard buddy bottle should mean a significant shot count, and the Airborne doesn’t disappoint on that score. From 220bar, my chronograph blipped through 300 shots, until a residual pressure of 110bar was reached. Yes, we’ve established that the action is actually regulated, but even so, clocking a total spread of just 19 FPS over those 300 shots, had me double-checking the figures a couple of times. Quite superb consistency in anyone’s book, and coupled with that shot count, it’s fair to say we have serious firepower on offer here.

OK; power, consistency, and that whopping shot reserve all stand for little unless there’s some half-decent performance to back it all up. The rifle produced keyhole groups at 25 yards and sub 5/8” groups at 40 yards. This ATA was making one hell of a point!

For best overall results, I would always recommend conventional dome-headed pellets, and these are usually the most reliable when shot through a magazine too. I used Rangemaster Sovereign pellets in .22 calibre for the record, straight from the tin, and the Airborne’s barrel certainly liked them.

As previously mentioned, the mag cycled faultlessly, but it’s also worth noting that this type of magazine has the advantage that, once empty, the mechanism blocks the loading channel, so you instantly know when the 12- shots are up. The sidelever will stay back, meaning it’s impossible to fire just air!

Do I sound impressed? Well, it’s difficult not to be. A well finished, nicely made gun would be a bargain at this price point, but factor in those superb consistency figures and halfdecent accuracy, and what more do you really want for £400?

I would like to thank Richard at MGR Guns of Woodhall Spa, in Lincolnshire, for the loan of the test rifle.