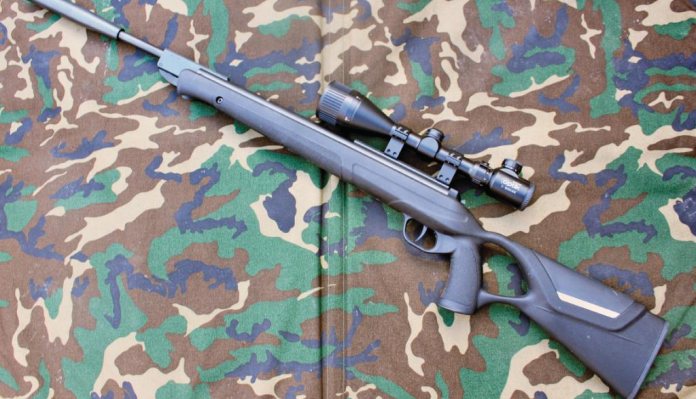 Who would have thought that one day Centrefire rifle stalwarts Blaser would dip their toes into air power? However, considering the German holding company GSG who own Blaser also have Diana under their ‘wing’, then it stands to reason that they could call upon the knowhow and pedigree of Diana to advise and build an air rifle that would be worthy of the Blaser brand name. Basically, that’s why we have the air rifle here on test; here I need mention that there are two versions available. A standard full-length model with open sights or the ‘compact’ model as tested. This omits irons in favour of a muzzle weight, is shorter in length and currently only available from a very few select dealers but all of course are imported and distributed in the UK by Edgar Brothers.

The retail outlet of note here is T & J.J McAvoy Guns, who not only kindly lent me the test rifle but readers might recall brought us the ‘bespoke’ BSA R-10 SE Firefly LE, which was featured in these very pages. But I digress, because the main reason I need specify the retailer is because they’re bundling the ‘Blaser AR8’ (as I shall refer to it from now on) with a Richter Optik 3-9x50AO IR scope, 2-Piece mounts and a very good quality lined gun slip. A package that’s both practical and cost effective; so, without further ado, time now to check over the gun.

Due to its intended use and style, it’s no surprise that it’s dressed in a synthetic, allweather black ambidextrous stock with an ‘Anti-Slip Coating,’ and as the company states, they used the hugely popular Blaser AR8 as the design inspiration for it. This is clear at key areas of the stock, so it’s here ‘from the rear’, so to speak, that we take the tour.

At the very rear, the rifle sits in your shoulder courtesy of a thin, yet full black rubber buttpad, which you’ll notice hardly drops down lower than the rest of the butt section, due to the rifle having a very shallow cheekpiece and relatively low comb. Incidentally, a nice touch is the main section on both sides and top of the cheekpiece has a rubberised compound ‘overcover’ for comfort; under this on either side are silver strips, neatly inlayed to sit flush with the stock, bearing the rifle’s name giving adding a tad more to the rifle’s already unique stylish appearance.

The elongated thumbhole has also been well considered by way of shape, proportion and positioning; obviously, it’s immediately behind the grip but configured so that the shooting hand can attain a full unhindered hold of the slight curve forward ‘front-section’, which has well rounded contours, palm swell plus generous panels of stippling and is finished with a colt’s foot that slightly flares out around the base, to form a distinctive lip.

The contour and depth of the forend start at the rear of the integral trigger guard and it only tapers slightly upwards for its entire length, to end in a full Schnabel tip. For grip, there’s a lengthy uninterrupted run of impregnated stippling that covers the underside and rises part way up this slim, yet lengthy forend. So, overall, this may well be a fullbore styled ‘handle’ but it manages to ideally suit the action it holds.

Now, we come to the ‘mechanics’ and I’m glad to say that we’re firmly back in familiar airgun territory, as the major features that Diana use on their production air rifles are also in evidence here. For scope fitting, there’s a lengthy raised rail positioned at the very rear of the air cylinder. Extending, from the very generously sized breech block, we have a stubby barrel, dominated with what, at first, you’d presume to be a moderator but is actually a very factory fitted muzzle weight. After shooting the rifle a while, you’ll soon appreciate the dummy-can’s ‘macho’ dimensions, as it doubles up to function as a very useful cocking aid. And although measuring a full 7¾-inches, due to it fully sleeving all the way back on the barrel, it doesn’t add to the overall length. As you unlatch the tube, you’re not compressing a spring on the cocking stroke, because the Blaser AR8 uses Diana’s very own N-TEC (Nitrogen Piston Technology) system as the power source, which of course, is their take on the ‘gas-ram.’

With the scope supplied on board, I soon got down to business and discovered that although it’s not the most strenuous of break-barrels to cock, it’s certainly not one for the younger shooter. The cocking stroke is smooth and locks up very securely in the open position; upon cocking, the trigger’s automatic safety pops-out at the rear of the cylinder, as the rifle engages with the sears. The breech uses a stainless-steel sprung ball bearing detent, which, combined with a chunky breech seal, ensures an air tight seal and solid lock up once a pellet is thumbed home and the barrel returned to its closed position.

The 2-stage adjustable trigger unit has a thin, long and slightly curved metal blade, which releases shots cleanly and without creep. When cocked, the auto-safety ‘pops-out’ rearward and is ideally placed at the rear of the air cylinder to be pushed inwards with the ‘big digit’ of the shooting hand for disengagement.

Recoil is typical of a quality gas-ram; that being it only nudges slightly rearward in the shoulder on firing, worthy of note is the muzzle weight proves its worth by fully quelling muzzle flip and report is only heard as a dull ‘thud’; so, in my opinion most won’t feel a ‘can’ needed. Also, once used to the particular nuances of the firing cycle, which is common to all ‘gasram’ powered air rifles, the Blaser AR8 proved capable of producing ¾-inch c-c groups at a set zero of 25-yards.

Shooting the Blaser AR8 Professional Success proved to be a refreshing change and a good advocate for the company N-TEC ‘gas-ram’ power source. Un-scoped, it is a tad front heavy, due to the generously sized all-steel muzzle weight but as the combo has been given a well-considered size of optic, once on-board, the ‘felt’ weight is brought back to the shoulder.

It’s solid on aim, feels very comfortable in the shoulder and is as accurate as any other rifle of this ilk. Also, due to the unique overall styling, the company has managed to give the AR8 quite a traditional ‘centrefire’ persona, which I’m sure was the intention, being destined to bear the Blaser brand name. Another plus is that, in use, airgunners will appreciate the stock features, as the design translates over to give the rifle a very assured feel when in the hold.

The Blaser AR8 is obvious a tough customer that’ll stand up to the knocks and scrapes that any hunting rifle can be subjected to, it performs as a quality ‘gasser’ should and as this is such a unique release, hunters should check it out.