Blast from the Past :Theoben Olympus 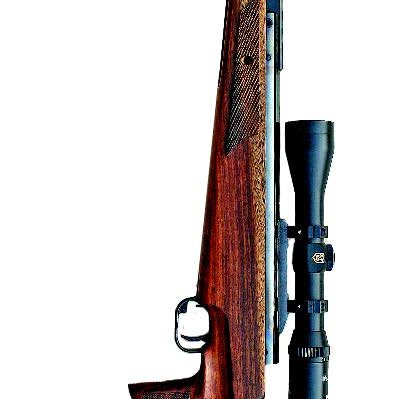 Innovation is a good thing in any industry, as it shakes up the status quo and can change the way we think about how an airgun should work. In 1983, Ben Taylor and Dave Theobald invented a whole new concept in airgun propulsion, which did not rely on the tried and tested spring power system. Their company, Theoben - derived from their names sake - had hit on an idea that used a gas strut system to push an airstream down the barrel.

Doing away with the noisy spring system of old, a break barrel or underlever airgun could be cocked and loaded in the conventional way, but instead of compressing a spring, a volume of air in a sealed piston/chamber arrangement was compressed. This meant that there was no spring noise and each shot was very consistent. The new power source was also capable of handling different pellet weights that a conventional spring system had trouble with. Another benefit was that the gas ram system could be left cocked for long periods without loss of power, making it a real benefit for hunting purposes.

The Theoben Olympus was the next step after the original Sirocco gas ram air rifle, which utilised a break barrel system to cock the action, and in truth, had an average trigger and pretty plain sporter stock. As the Sirocco became popular amongst air rifle users that appreciated this new technology, me included, Theoben upgraded the action and added a thumbhole stock design. They called this the Grand Prix model, which eventually morphed into the Olympus rifle that was at the pinnacle of its design.

As time rolls on, these older Theobens are becoming highly collectable and are being recognised for that they are, a pivotal moment in British airgun design.

The break barrel has a very precise lock-up, which is crucial for good accuracy, especially with this type of cocking system. To combat wear and tear it is adjustable, allowing the user to take up the slack and to keep the barrel and air chamber properly aligned as well as airtight.

The gas ram power unit utilises a lightweight piston that incorporates a floating inertia weight that literally cuts out recoil, ensuring very good accuracy. The crown of the piston wears the legendary and also patented Zephyr piston seal, which helps shot-to-shot consistency, so velocity variation is often less than 10 FPS. This system was dubbed the ‘High Efficiency’ or HE action and transformed the performance of the humble break barrel air rifle design.

Best of all, on the Olympus, the original trigger was replaced with a newly designed Evolution model. This was based on a falling block system, with a 2-stage trigger pull and adjustment on the second stage for travel as well as weight. Compared to the old unit it was excellent, and each trigger was honed for precise engagement and sear let off.

The Olympus was available in all four calibres but used differing barrel manufacturers. The .177 and .22 were Anschutz, whilst the .20 and .25 calibres were from Walther. The latter being very rare these days. Both are target grade and my .177 model will print pellet-on- pellet groups at 30 yards using JSB Exact pellets. Muzzle energy is 11.6 ft/lbs.

Most striking of all is the unusual stock, not only for its design but also the wood that it is made from. Quality walnut was becoming expensive, so Theoben opted to use an alternative African exotic wood called Hyedua. It has a very striking grain pattern and a really good colour to its structure.

The thumbhole stock was quite radical in its design with very angular edges and pronounced lines. In fact, the checkered panels on the forend looked raised but actually the wood around the stock is reduced to give this raised effect, and also make the weight of the Olympus more manageable. There is a raised check piece and very vertical pistol grip, which I like, and there is a thumb rest so you can use the stock like a conventional sporter design if you so wish. The top strap of the thumbhole is very thin so be careful not to drop the rifle on its butt as I have seen these break here.

What to look for

The sound moderator was available in two models, the Long Series (as pictured) or the newer Evolution model that reduced the muzzle report to a dull ‘thut’. Either is good but check for damage. Both makes of barrel assure excellent accuracy but as with all break barrel air riles it is worth checking the barrel is not bent upwards.

The trigger unit needs little maintenance, same with the action, any leaks will be evident with a weak compression on cocking. No open sights are furnished but the Dampa mount option eliminates stress to scope under recoil. The ultra-fast lock time from the proprietary gas ram system should be both smooth and silent, so check for this.

So, the highlights are low maintenance and a very consistent gas ram system made in England, to very high specifications, and an ultra-modern thumbhole stock carved from African Hyedua wood for good looks and stability. The airgun weighs 8.5 lbs and has an overall length of 42” (with a long series silencer). Second-hand prices start at £450 and I purchased this model from C H Westons in Brighton.

The Olympus is my favourite Theoben design, or maybe the Eliminator. If you can find one, then you have a piece of airgun history as well as an incredibly accurate, powerful and well made British gun.