Blast from the Past - Weihrauch 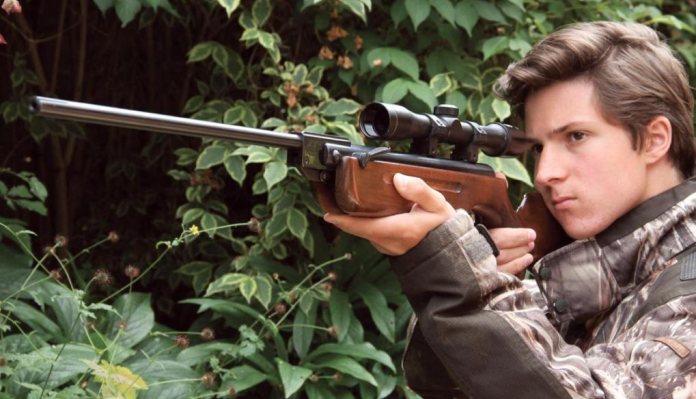 I have always been a big Weihrauch fan, their air rifles are just that bit better made than all the competition.

They herald from an age when a ‘no holds barred’ type of good quality engineering was prevalent. Build it strong, build it well and make it to last was the watch word with Weihrauch and that is still true today.

In the seventies, when I was a teenager, we had the classic HW35 and HW50s but one air rifle that I could not afford was the HW55. It kind of slipped me by, as it was a ‘target’ pedigree air gun, so I kept to my HW35; a big mistake, as the HW55 was probably Weihrauch’s best ever airgun.

The HW55 is certainly over-engineered, like the HW35 and HW80, which are full-powered hunting weapons, so this smaller brother is the reverse in most respects. It is trim, perfectly balanced and available in three versions to suit any shooter’s end usage.

Being target based rifles, not really designed for hunting, they come complete with aperture sights and with a mainspring that gives a power level of between 6-7 ft/lbs energy. Its sibling, the HW50, is similar but fitted with a 12ft/lbs spring for hunting. The other major difference with the HW55, and one reason it is such a gem to shoot, is the semi recoilless design and unique barrel locking mechanism. First developed in the mid-fifties, the three versions are, the beech stocked and grooved forend SM version, the MM version has a walnut stock and chequering, whilst the Tyrolean has a superb Tyrolean styled stock of select walnut.

I have an SM and Tyrolean version here, but the MM rifle still eludes me. The SM version is the base model but by today’s standards is beautifully made and proportioned and ideal if you want to mount a scope to it.

The Tyrolean stock is a work of art to be truthful and is designed for open or aperture sight use, so that the shooters cheek is rested in exactly the same position every time, which aids in a consistent, accurate shot. The high, curved rubber recoil pad sits on the shoulder and the HW55 is so well balanced that you do not notice the weight at all, which is minimal. Both the pistol grip and forend are hand chequered on the special select walnut stocks, which really added to the overall look and quality feel.

The metalwork has Weihrauch’s typical highquality bluing, which is deep and hard wearing, especially on the barrel that will get a lot of sweaty hands on it when cocking the HW55.

Early models were fitted with a rear sight as well as aperture sights, but later models only had apertures fitted but both have a dove-tailed receiver for scope use if desired. This is what I like, as when a scope is fitted, the HW55 becomes a semi recoilless, short-range hunting tool par excellence. In fact, many a custom house, like Venom and Sandwell Field Sports, realised this and made their own versions of custom rifles based on the HW55. Many upgraded the HW55 to 12ft/ lbs and when done correctly makes a superb rabbit gun.

Unique to the HW55 is the barrel locking mechanism, which is part of its appeal, much like the HW35. The HW35 model is locked by a manually operated sprung latch and the HW80 by a traditional sprung detent catch. However, the HW55 series has a fool-proof detent system but with the addition of a barrel tensioning wedge. To operate this, there is a lever to the left of the front edge of the air chamber that, when pushed forward, slackens an adjustable hinge that thus allows a light tap on the barrel to disengage the detent lock and the HW55 can be cocked. Then, a pellet is inserted in the barrel, and when the barrel is closed, the lever is returned backwards, which ensures a uniform barrel to air chamber position, making this one of the most accurate break barrel designs developed. If you buy a second hand HW55 check the latch still locks correctly.

As you would expect, the HW55’s propulsion system is honed to deliver sufficient velocity for target shooting and thus has a virtually recoilless mechanism, with no vibrations on firing. When you shoot an HW55, it’s like shooting a spring gun that feels like a PCP gun.

All HW55s are accurate, quiet and recoilless; in fact, Weihrauch developed the firing cycle to have the pellet leaving the barrel before any small recoil that there was could adversely affect the pellet’s flight. They are clever these Germans!

HW55s were only available in .177 calibre and with a barrel length of 18.5-inches, optional two sleeve weights of 14ozs and 2lb were also available. Those sleeves are very rare and worth having.

The Tyrolean has a superb walnut Alpine style checkpiece that is a perfect fit for the aperture sights and great looking to boot. The MM’s walnut version is more sporter looking and even the SM’s beech stock has some lovely grain and old-world charm.

The sights on all Weihrauchs are very well-made and fully adjustable. The tunnel foresight with six differing elements and micro adjustable aperture rear sight are standard.

When you buy an HW55, here are a few pointers to look at before you hand over your hard-earned cash. So, check the barrel locking mechanism i.e. side lever is tight, as this part is no longer available and it is essential to align the barrel correctly. You can adjust this at the base of the breech, so have a good look to see if it’s all there and working correctly.

When you cock the HW55, make sure it is silky smooth and there is no noise and on firing there is very little recoil, as the original. There is no safety catch, so you cock and un-cock on the trigger to test it. Also, you of course have the renowned Rekord trigger mechanism, which is superb and fully adjustable, still the best after all these years.

Dimension-wise, the Tyrolean is 7.8lbs in weight and 43.5-inches long, whilst the SM and MM versions are very similar. All have a cocking effort of 15lbs.

The HW55 is now becoming hard to find, as shooters are buying up old air rifles to relive their youth or can now afford a gun that was out of reach when they first came out. SM models go for £300 plus these days, with the walnut stocked MM up to £400. The prize HW55 is the Tyrolean HW55T and you can name your price for one of these, keep your eyes pealed as they are a true class.