Blast from the past - Weihrauch HW80 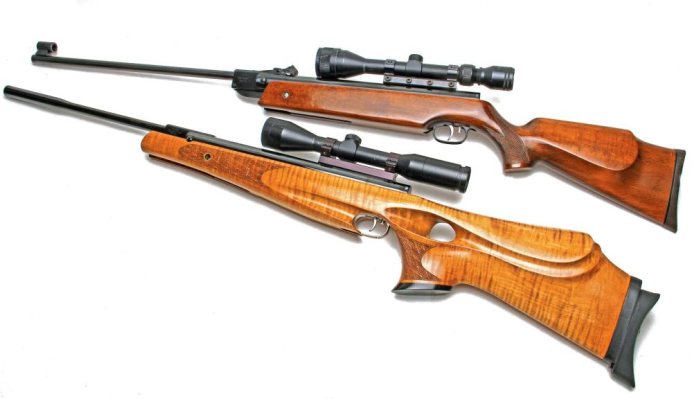 Weihrauch air rifles to me were the pinnacle of airgun design as my first air rifle was an HW35. I bought it second-hand from John Powell’s gunsmiths for the princely sum of £50.

The HW80 was thought of as an upgrade for the HW35, but in fact, both models were produced together. The HW80 was always meant to be a full-power rifle and was designated the R1 for the American market. The 12 ft/lbs limit here in Britain means that the de-tuned HW80 for the UK market was over-engineered and therefore lasted forever. It soon became the must-have springer and along with the HW77 underlever launched the customising scene here in the UK.

There are several major differences between the HW80 and the HW35. Firstly there was no barrel latch to unlock the action; secondly, the piston head assembly had a new design and configuration and finally, the cocking linkage was one-piece, unlike the two-piece HW35. If you can find an old model HW80 then you have done well as they are true beauties, I prefer them to the newer more rounded edge design. They are on that cusp of old-world technology and engineering, yet yield that new era of air rifle design.

With an overall length of 45.25”, the original HW80 is big, but that’s the beauty of the Weiharuch air rifles, they are built to last yet handle incredibly well. The original barrel measures 19.5” long and includes really good open sights, however, it is not threaded for a sound moderator. If I am honest, I prefer it this way as it defines that age.

The barrel is pure precision, put a cleaning rod with a tight cleaning patch on a calibre specific jag to the bore and those early Weihrauch rifles are butter smooth and tight for excellent accuracy and a long life. The barrel seal to action is a synthetic white coloured ‘O’ ring and the one on this test rifle was perfect around its circumference. Externally, the bluing is second to none, its deep, rich and flawless.

The action lock up now utilises a single detent lock up and no longer an external locking lever. Importantly, the cocking piece is now one-piece and has eliminated the old HW35 click on cocking. However, this design change came back to haunt Weihrauch, as a well used HW80 could wear the cocking linkage due to the forces involved. When this happened the HW80 would not cock or engage the trigger sear, mind you that was after firing 100,000 pellets!

Everything about this airgun is big, including the air cylinder which is 11” long and 1.25” wide compared to the HW35’s, which is the same width but only 9.5” long. However, it is a pussy cat to shoot, largely due to its significant overall weight. This is actually a benefit as it tames any undue vibrations initiated from the spring piston design and gives the airgun a very steady hold and recoil dampening effect. Tuners like Venom Arms were soon reducing or sleeving the action, re-porting, custom making and modifying pistons, short stroking it and god knows what else to improve performance further.

Weihrauch’s open sights were fitted but let’s face it most people don’t really use them, so there is a 7” long, 11mm dovetail on the top of the receiver for mounting a scope instead.

The trigger and safety are the same as the HW35, and that equates to the best trigger ever to grace an air rifle in my view; the Rekord model. Even today, it is still tough to beat. Custom trigger blades of brass or aluminium, set back, straight or curved were all the rage. The safety pops out as a catch on the left-hand side of the receiver as you cock the rifle. It is easily disengaged by pushed it back in using the thumb on your firing hand.

Stock wise, on a rifle of this price range (£100 plus when new), a hardwood, beech stock was standard. Ok, it’s not walnut, but Weihrauch has stained it a dark colour and finished it with a hard lacquer that really brings out the grain. Better still, the checkering is still hand checkered so gives a real rifle feel. You have a solid rubber recoil pad and a well-defined cheekpiece, so all the weight is very well distributed in the shoulder. The Mk1 stocks are different and better looking in my view, as they are distinct in their angular front end and not rounded like today. Whether it is an old original as such or a newer version, the HW80 is still the benchmark from which all other break-barrel air rifles are judged.

The barrel is button rifled, helping to achieve Weihrauch’s trademark accuracy with a wide range of pellet weights and designs. The open sights are excellent with tunnel foresight and fully adjustable steel rear sight. If it’s an original HW80 with slanted forend you want that barrel unthreaded for originality and check it is not bent!

The action is a beefed-up version of the HW35 and originally designed for FAC use or export and was the action to have in the ‘80s, but take care as some examples have been well used and abused over the years. Make sure you chronograph it before you buy, as often they are upgraded beyond the 12 ft/lbs legal limit! The original stock with angled front section is best, and the beech stock with hand checkering and solid rubber recoil pad is good.

Weighing in at 8 lbs 10 oz and 45.25” in length the HW80’s German engineering ethos of overkill is at its best, that why it’s still in production. The Importers Hull Cartridge Company still supply new but look out for original Mk1’s as they are gaining in value as are any custom variants if you can find one!