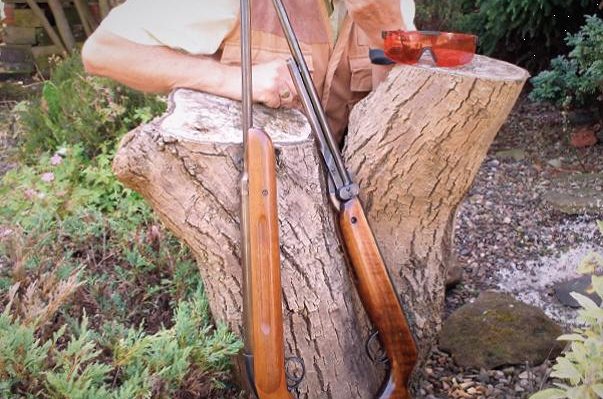 Every now and then I get a déjà vu moment when playing around with air rifles that takes me back to when I got interested and just for a split second, the atmosphere, smell and feel is captured in the present. It lasts milliseconds and is the nearest thing to a time machine that I can get. We have all experienced this I’m sure, and this month I want to share a specific period with you, particularly, if like me, you did your growing up in the early’60’s.

The Year is 1962 and we are 15 years old. Our sole purpose in life is to own an air rifle, and as we could do in those days, roam around the fields, brooks, and canal paths shooting at bottles, cans and of course, rats!

Nobody bothered us much in those days, as long as we observed the rules! We could walk down the street and even get on a bus carrying an unsheathed air rifle without raising an eyebrow, although technically it should have been covered.

I remember my friends and I were out in the woods with my BSA Meteor break-barrel in .22, as no self-respecting lad would have anything else. When an older lad appeared carrying a BSA ‘Airsporter Mk2 of 1962 vintage. One by one we were allowed to handle and fire this, flagship rifle and I will never forget the feeling of squeezing the trigger and almost instantaneously hearing a loud ‘SPLAT’ and seeing a plume of fine mist going skywards as the .22 pellet struck the calm surface of a pond some 50 yards away; we had never seen such a powerful air rifle!

We were told it was ‘tuned-up’ and in reality was probably just touching 11 ft/ lbs at best, but that was much more than our Meteors could muster. Most off the shelf air rifles then seldom exceeded 10ft/lbs for a flagship model and 8 to 9 was the norm for most others. Webley also had an equally respected model the Mk3 under-lever! The bone of contention amongst us was which was the best, the Mk 3 or the Airsporter Mk 2? Or in our youthful and inexperienced exuberance, which was the more powerful? Our sole purpose in life was to own one.

Back in 1962, BSA and Webley were the dream manufacturers for lads wishing to own a state of the art air rifle. Yes, there were German models available, but being patriotic, British was best! I am lucky enough to own examples of both models; the Airsporter is 1962, while the Webley is a bit trickier, definitely ‘60’s, both are in .22 cal. Each one has been recently serviced using materials conversant with original materials. Leather washers, new spring etc. So is it a case of rose coloured glasses, or were these famous models that good?

The BSA Airsporter was introduced in 1948, a year after I was born and remained more or less unchanged until 1962 when the Mk2 appeared. It featured a two-piece stock that was prone to splitting or snapping as it aged, and a conical piston shaped a bit like Flash Gorden’s space ship! It also had provision for a telescopic sight, which had been a breakthrough 3-years earlier on the ‘Meteor’. The first air rifle to have scope rails fitted. It had an automatic flip open loading tap that activated when the under-lever was pulled back to cock.

Aesthetically, it is very elegant, much more so than later models, probably owing to the fact that BSA had manufactured over a million Lee Enfield .303 rifles some years earlier, its pedigree is obvious. No plastic, all quality steel and wood. The open sights give the best picture that I experienced on any air rifle. The rear is a fold-down V-notch with an adjustable/sliding plate for elevation correction. Windage consisted of drifting the whole sight left or right in its dovetail. Up front, is a ramped blade with silver tip in a protective tunnel. A bit crude I admit, but in the aim they just worked well and pin sharp, even to my old eyes, as that fine bead drops into the rear notch, giving the feeling of absolute precision. The forend tapers down gradually and is rounded off at the ends, allowing the locking latch on the under-lever to neatly protrude. The trigger strap, guard, and rear tube cover are all aluminium. On top of the breach are the scope grooves; consisting of four shallow cuts in the metal. Back in 1962 this would probably have been a 1 or 2.5x20 BSA with a moving reticle. When zeroed the cross could be anywhere in the circle. Top left corner springs to mind if I recall correctly!

There is a finger board on each side of the forend for hold and unusually the butt does not show a separate plate/pad, instead the wood is cross slotted for grip in the shoulder. The single-stage trigger is made from a folded sheet of metal and well shaped, which broke at around 3lbs. The Airsporter continued production well into the mid-80s in various guises but for me the Mk2 is the pearl.

The Webley Mk3 is entirely different. This particular one is in walnut and nicely marked but the action is much more on show, with the under-lever visible its entire length.

A fraction shorter than the Airsporter, length of pull is a tad longer and the forend is 4.5” shorter and with finger boards. It appears to be a more expensive to manufacture, as the cocking lever and trigger are solid metal, as opposed to BSA’s use of folded/stamped components.

Scope mounts differ too! Pre 60’s guns had a dumbbell-shaped rail, which was riveted to the chamber. Then a run of Mk3’s without any rail at all, then a substantial looking block as fitted to mine, but only spot-welded to the chamber. Sights consist of an elevation-adjustable rear V-notch via a small integral thumbwheel. Up front is a rather course blade in a tubular protector. Both units are set in dovetails, so can be drifted for windage correction.

The Mk3’s loading tap is not automatic and is fitted on the right hand side. Again the butt plate is plain wood and also not grooved. It does have a classy ‘Webley’ motif in the form of a circular white disc sunk into the left side though. Looking at my two examples, it’s obvious that the Airsporter has had the harder life. Its two-piece beech stock has been repaired and the bluing has given way to a brown patina. The Webley’s tiger stripe effect stock is lovely and the bluing is good all over. There is just something about these vintage air rifles that cries out ENGINEERING!

The Chronograph brings us back to reality as far as power is concerned, but the pleasant surprise is the consistency! I used four pellet types that I happen to have in the drawer and shooting 5-shot strings over the chrony, neither rifle had a spread of more than 9 fps. Pellets were Eley Wasp, Superdome, Air Arms Field, and Super H-point. Depending on the rifle, the best were the Air Arms and the Superdome.

The Airsporter liked the Air Arms pellets and although consistent with the others, power was nearly 1ft/lb down.

Our boyhood dreams are shattered and exaggerated in the mist of time! We didn’t give a fig about consistency back then, hadn’t even heard the word. It was power that we wanted and in our young imaginative minds, these rifles gave us that! These memories would stick with us into manhood and older age, carrying the tales of power as it appeared to us as boys.

Accuracy went to the Webley but I suspect that my Airsporter is not at its best with a re-crown on the agenda. Both are capable of hitting tin cans out to 30+ yards, which is what we did back then. No ‘grouping’ on paper or anything sissy like that. No! It had to be reactive! Something that twitched or flew up in the air when hit.

Now there’s an idea. Maybe if I make an animal shaped target that falls over when hit in the middle; hey I might be onto something!