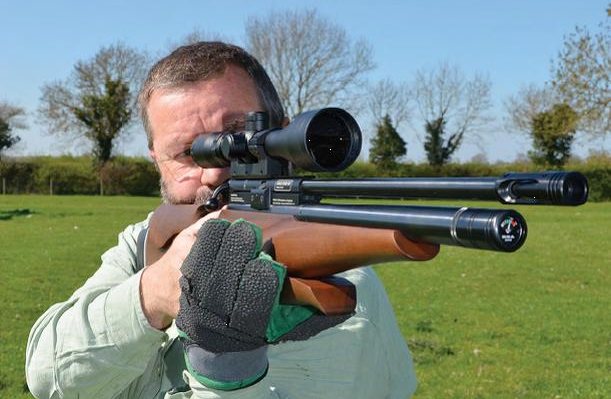 Whilst HFT is undoubtedly a sport that we can all enjoy ‘at our own level’, many, like myself, take great pleasure from trying to be ultra competitive. Okay, I appreciate that my best days are probably behind me, but when I first began competition shooting, I was always told to look at what kit the winners were using, and it’s certainly true that places on the rostrum are dominated by several top brands.

Anyone attending national HFT events over the last couple of seasons however, can’t fail to have noticed that BSA are now vying for places. Of course, to taste success, you need some talented shots ‘on-side’, but for them to achieve anything respectable, in this testing outdoor arena, the guns need to allow them to perform. The latest R10 specification has pulled in a few trophies for the company, and a few competitors have triumphed with tricked out Scorpion actions. Latterly though, Roger Lait and others have been busy working alongside BSA, and after several custom made test beds, the latest Goldstar SE is the result.

The Goldstar SE’s remit is to offer the dedicated shooter a fully adjustable rifle, that can not only compete at the highest level in HFT, but will also be equally at home controlling the local rabbit population. Both scenarios benefit from high grade equipment of course, and with an increasing number of shooters prepared to invest in more sophisticated kit, manufacturers like BSA are evolving to satisfy demand.

Take a look at the specification of this new model, and it’s clear that BSA mean business. A fully adjustable production stock is a great asset. Add in a regulated action, factory made air-stripper as standard, adjustable two-stage trigger, fully floating barrel, and in the case of my multi-shot test gun, a 10-shot magazine, and the Goldstar SE starts to grab the attention. If that sounds a comprehensive list of features, you’d be right, so let’s take a detailed look…

BSA are supplying this model in a choice of three stocks: oil finished walnut, (rather bland in the case of my test model), red, white and blue laminate, or the ‘Black Pepper’ option of laminate, and all three offer identical configuration. An adjustable rubber butt pad sits at the heel, and this can be moved up and down on its axis, but at the turn of an Allen bolt, the entire butt assembly can also be extended, to increase the length of pull. The pad itself can even be offset at an angle.

The cheek piece is adjustable both left to right, and for height, which means that it can be set to give precise eye/scope alignment as required. But BSA were determined to go the whole hog with this model, and that means an adjustable fore-end block is also part of the deal. Again, at the turn of an Allen screw, the block can be moved downwards, or back and forth, along its axis. Plenty to play with then!

Options continue with this model, since it can be supplied as a single shot action (favourable with HFT competitors), or as a multishot, complete with BSA’s latest 10-shot magazine. My test model came as a multishot, with the red mag insert denoting .22 calibre. The internal drum is blue when in .177.

BSA are one of the few airgun manufacturers still producing their own barrels, and the Goldstar SE’s tube comes with an ‘ECHF’ specification, standing for ‘Enhanced Cold Hammer Forged’. Whether it’s any better than their usual specification is open to debate, but keeping production inhouse, does mean this famous old brand can keep an eye on quality. The barrel is properly floating, as in there are no clamps, O-rings or restrictions placed upon it, of any kind.

I’ve always favoured this configuration, since it allows the barrel to resonate and vibrate naturally. The muzzle is threaded to accept a silencer, (advisable if you plan to hunt with the Goldstar), but as mentioned, it comes fitted with an adjustable Air Stripper.

These devices are often sold as after-market add-ons, but its inclusion as standard equipment on the Goldstar SE, is testament to their popularity on the HFT competition circuit. As the pellet exits the barrel, it immediately enters a small cone, which strips away the turbulent air, leaving the pellet to continue on its way. The cone here is adjustable, which means that the gap between the lip of the barrel and the cone can be changed. Groups can be seen to widen and close up, as this gap is altered. That said, it is very easy to get right, adjusted via an Allen key. I found a gap of around 4mm gave a good return, and stuck with that for the duration.

Finish-wise, the Goldstar SE is typical BSA. The standard of bluing and level of engineering overall is high; just contrasting with that slightly dull breech block.

To fill the Goldstar’s cylinder, twist the valve cover around to expose the inlet valve, then push the probe into the valve securely, and charge to 232-bar. Finally, close the cover to keep dirt out. Filling the new style magazine is easy, just needing pellets to be pushed head first into each aperture. Revolving the self-lubing internal drum (PTFE is used in its construction) reveals each chamber to be filled in turn. With the mag full, pull back the cocking bolt fully, push the mag into its slot from the left, until the small dimple lines up on the right side, close the bolt, and the shot is ready. Subsequent cycling of the bolt indexes the next shot.

I hadn’t appreciated just how much adjustment there was with this rifle, but handling can be really transformed with some careful tweaking. Set the cheek piece to where it feels comfortable, then tighten up with the Allen key; likewise, the butt section. I reckon the fore-end riser plate could do with being slightly longer, but it felt great in operation, adding much needed elevation for those occasional, awkward tree shots.

BSA have long since incorporated decent triggers on their PCPs and the Goldstar SE’s is a sensitive two stage unit, adjustable for both pull weight and blade position; another important feature in any competition gun after all.

One interesting point with the Goldstar has been a few rumblings about how the supposedly tweaked barrels on this model take less wind. So, I thought I’d enlist a highly capable friend of mine to evaluate this unofficial claim. Peter’s won HFT shoots at local level, so I knew his performance was up to scratch. Shooting alongside each other, and calling “3… 2… 1… fire!” then alternating the call, gave a fair spread of results, and with a Weihrauch HW100 in .22 calibre in the mix, it would make interesting reading. Both shooting at a centre line at 45-yards, in a distinct but variable cross breeze, would show any variation, and or any trend.

So, after conducting these (admittedly unscientific) tests, I have to conclude that in my opinion, the Goldstar SE showed no difference regarding shot characteristics in wind. What it did show however, was some excellent down- range groups, (easy sub half-inch at 45-yards) and superb shot to shot consistency- 12fps over 100 shots, from its regulated action. Phenomenal given the compact cylinder.

My only gripe would be the dodgy positioning of the pressure gauge, forcing the user to almost look down the barrel, when checking the figures. Hardly a criticism confined to BSA of course.

With an RRP of £899, the Goldstar SE represents a significant outlay; and at that price point, it has to compete with some serious opposition – the Air Arms HFT500 for one. Yet having attended HFT Masters events and seen top spot taken with a single shot version of the Goldstar, it’s clear that BSA have hit the ground running, with this super compact, highly adjustable, and properly accurate new model. Attributes that make this impressive BSA a serious option on any HFT rifle shortlist.