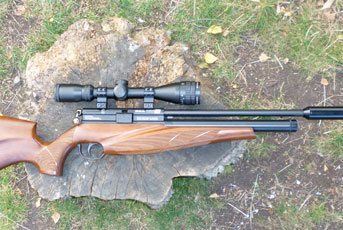 Last year BSA decided to give the Scorpion a makeover and they’ve certainly improved an already impressive product. The subject of this review is the 10-shot, .22 calibre, magazine fed carbine with a beech stock.

First off I’ll draw your attention to that classy-looking stock. Designed in conjunction with, and manufactured by the Italian company Minelli, it’s a real cracker! These Italian craftsmen have built a solid reputation making stocks for European firearms companies, as well as several UK airgun producers. The BSA R-10 stock is one of theirs too, as is the BSA Ultra’s attractive new woodwork and the SE’s furniture has a sort of ‘family look’ about it - a smart move.

At the front we have an elegant hand-filling forend with an angled tip. I like the way the gripping area has been stippled not chequered. The stippling is carried out by laser and really enhances the grain of the timber, which in this case is a nice piece of beech; walnut is also an option at extra cost. Where the forend meets the mid section of the stock there’s an angled groove similar to the R-10 and Ultra stocks. The grip is also stippled and includes the Minelli logo; they’re obviously proud of their products!

The butt is ambidextrous, with a high cheekpiece on either side. The underside of the butt is attractively contoured and there’s a slightly curved rubber butt pad to finish things off. My one minor gripe is the section of wood where the cheekpiece meets the pistol grip. There’s a small ridge that could be rounded off slightly, which would make the stock that bit more comfortable. It’s very small point, but I speak as I find… Other people who shot the rifle didn’t notice it at all, so maybe it’s just me!

The SE has the tried and tested Scorpion multishot action with a rear mounted ‘Bolas’ bolt handle, but there have been numerous internal tweaks to the valving, hammer mechanism and its spring. These changes have resulted in improved efficiency and a far crisper sounding report when the rifle is fired without a silencer. Shots per fill have increased due to the more frugal use of air and this version certainly provided more shots than the older models.

A pressure gauge is now fitted in the underside of the forend. These gauges come as standard on many pre charged air rifles these days; they’re a handy indication as to when more air is required, although the gauge fitted to the filling bottle should be the one to go by.

BSA have updated their 10 shot, spring-driven magazines several times over the years, but the new version is the best yet. The older versions needed a small catch to be tripped by the rifle’s action, so that the inner wheel that holds the pellets could revolve under spring pressure, ready to deliver the next pellet. This mechanism and/or the mag could sometimes lead to problems, but the new feed device is completely self-sufficient.

The pellets are dropped into one of the 10 holes in the internal rotor. The pellet itself is what keeps the internals from rotating, and it only moves when the pellet has been fired and the bolt withdrawn. I never experienced problems with the old style magazines, but it’s good to know these new ones are even more reliable. Note that old mags won’t work in the new rifles, as there’s no magazine actuator, but new ones will work in earlier models. The inner wheel is anodised alloy (red for .22, blue for .177) and numbered, so there shouldn’t be any excuses for firing without a pellet in the breech.

The magazine is retained by a sliding catch at the front left hand side of the action. When all 10 shots have been fired, it is slid forward, and when the bolt is pulled to the rear, the mag can be removed from the left. A groove is machined in the mag housing to facilitate easy removal, even when wet. The re-filled magazine is inserted and the catch slid rearwards to lock it in place once again.

BSA have also made an optional single shot adaptor that fits in the same way as the magazine. When the bolt is withdrawn, the carrier is swung out to load a pellet and returned to battery.

The cocking and loading bolt is very slick in operation and the two-stage trigger unit came well set from the factory. Adjustments can be made, but the action needs to be removed from the stock first; I just left it alone and got on with shooting. A safety catch is fitted to the left of the action and pushes forward for FIRE, back for SAFE. Charging with air is carried out using the familiar BSA brass probe and the inlet valve is covered by a screw on cap at the front of the blued air reservoir. The instructions recommend a fill pressure of 232 BAR, and more than 100 shots are available per fill; however a slightly lower pressure results in a flatter ‘power curve’ with 80 consistent shots.

The free-floating 18 ½” barrel is one of the company’s own hammer forged items, so no worries on the accuracy front. The ½” UNF threaded muzzle is protected by a stylish multi-holed ‘muzzle brake’ that can be left in place or replaced with a silencer. I fitted one of BSA’s VC models and it certainly took the audible sting out of this Scorpion.

Accuracy testing was carried out at the excellent Pete’s Airgun Farm indoor range in Essex (where GunMart Online airgun videos are shot). It’s nice to be in out of the wind and rain when evaluating a new rifle, and the sturdy shooting benches are a pleasure to shoot from.

The test rifle was in .22 calibre and I fired a selection of quality pellets through it, all of which functioned flawlessly and accuracy was commendable. I settled on RWS 15.9 grain Superfields that produced thumbnail sized groups at 40 yards. One-inch spinners at 50 yards weren’t a problem, so more than enough accuracy for the next farm I visited…

A couple of days later I checked out my local farm to see what vermin was around. I expected feral pigeons, magpies, rats etc., but the weather had been awful, so it would be potluck. I’d previously mounted a Hawke Panorama 4-12 X 40 AO scope using Sportsmatch mounts and had been impressed by the image quality, MAP 6 reticule and the ability to illuminate the reticule in blue as well as red. Blue really stands out against almost any background and I think Hawke should change over from green to blue in all their scopes.

A juvenile magpie was too slow to fly off with his mates when I walked towards the sheep field and a Superfield stopped him with a headshot. I left it where it fell, hoping his young compatriots would come back, but I think the older members of the group must have kept them away. Another youngster went down at 30 yards in the pigpen, but I had to get in there quickly before the sow ate it! I know pigs can eat pretty much anything without harm, but you never know… and I didn’t fancy explaining why the sow had popped her clogs with a mouthful of magpie feathers. A solitary feral came into the farmyard and he too went down to a headshot. That was it for that visit, but my next trip accounted for another 2 magpies and 6 ferals.

I enjoyed my time with the BSA Scorpion SE and it’s obvious that the company are determined to keep their range up to date. The action is better than ever and thanks to the new magazine, owners can be sure of reliability. The stock is a real beauty and I think it’ll be a very popular model.