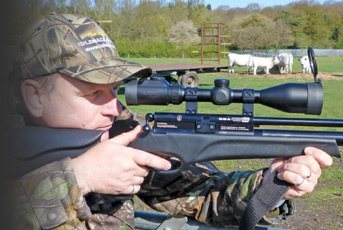 Even though I tend to use flat-shooting .177 calibre air rifles these days, I’ve always liked the idea of having an airgun capable of launching a really large chunk of lead, i.e. a .25. Now, not everyone shares my love of what some would consider a rather outmoded calibre, especially in sub 12 ft/lb format, seeing it as only viable in a high powered FAC rated air rifle. Fair enough, these mega pellets really come into their own when launched fast, but they still have a place for legal limit shooters. Pest control around farm buildings is often at comparatively short ranges and as I’ve always said, “If you’re going to drill a hole in something’s brain, make it a big one!”

OK, that may sound a little gruesome, but air rifle pest control is a serious business and needs to be carried out in a humane way. Causing fatal damage as quickly as possible is a necessary part of it, so a relatively large pellet is obviously going to create a larger wound channel and if it’s through the quarry’s brain, it’s game over, instantly. When I’m at the farm, I’m often shooting around the various buildings or I’m set up near a known rat run. I’ll generally know the ranges to various features such as barns, compost heaps, walls etc, and if I’m using my custom .25 Ultra I simply select the relevant aim point on my scope’s reticule. The relatively pronounced trajectory of my slow moving pellets therefore isn’t a hindrance to me and anything within range goes down. Feral pigeons and magpies really don’t take kindly to a .25 pellet in the brain, neither do rats.

When I trialled the prototypes of the new-style BSA10 shot magazines a few years ago, I informed them that they were really missing a trick, in that they didn’t make a .25 version; and if they did, it could obviously make it possible to produce any of their PCPs in the larger bore. The external dimensions of the magazine would obviously mean that the payload would have to be reduced to 8 shots, but this is more than enough for any multishot air rifle. The overseas market for high-powered airguns is huge and BSA already sells .25 versions of some of their rifles, but only as single shots. I’m sure the BSA management know their markets well and don’t really need advice from the likes of me, but I have kept on at them to get a .25 mag into production. I was therefore extremely pleased when Simon Moore, the company’s Managing Director, told me that the rifles would soon be in production. This was back in March and I recently received the first multishot .25 rifle they’ve made!

I couldn’t wait to open the box and I was as pleased as punch when I saw the carbine. I’d finally got a big bore Scorpion SE multishot in my hands and the new ambidextrous synthetic stock is very pleasing indeed. From the left hand side it looks almost identical to the original right hand only stock, with its upright grip and stylish cheekpiece, but turn it over and it looks exactly the same! I can’t see anybody with leftist inclinations being disappointed with the new offering, with moulded-in grip panels on the forend and palm swell on the grip. The trigger guard is integral and has elegant flutes at the back, making for a teardrop shaped hole that guides your finger to the trigger. The fore-end’s quite slim, with a semi Schnabel tip and there’s a hole in the underside for the pressure gauge. BSA are obviously proud of their stock, as there’s ‘BSA England’ moulded into it above the trigger and the ‘Piled Arms’ logo on the butt. Sling swivel studs are thoughtfully fitted front and back, so it’s easy to fit a bipod as well as a carrying strap. A ventilated rubber butt pad finishes of the stock; I personally would have liked to have seen an adjustable pad, but that’s just me being fussy! The timber stocked version (which I reviewed in .22 calibre last year) is also ambidextrous, so left handed shooters are certainly well catered for whether they go for a walnut, beech or synthetic stock.

The breechblock used on the Scorpion is common to all of BSA’s pre charged pneumatics and Simon told me that the machine that produces them has just been refurbished, resulting in a block that is better finished with a crisper look to it. The company produce their own hammer-forged barrels with the rifling being formed around a hardened steel mandrel. The .25 barrels made up until recently were actually .243”, so European manufactured .25 pellets (that are a true .25”) were a bit of a tight fit. I’m pleased to announce that new mandrels have been made which result in barrels with bores the same as those made by our Continental cousins. Pellet choice is now wider and pellets will load easier. The hole in the muzzle looks unnaturally large when compared to most conventional airgun barrels and the end is screw cut ½” UNF, so a wide variety of moderators can be fitted. I employed one of the company’s VC silencers and it tamed the report well. For those unconcerned by noise, the supplied ported muzzle brake can be left in situ.

Pellets are cycled into the bore via the slick Bolas bolt handle that on this model is black, in keeping with the whole ‘tactical’ styling. The feed mechanism is held in place by a sliding catch at the front of the action and it can be withdrawn once the bolt has been pulled to the rear. The magazine doesn’t have any O-rings to retain the pellets and this was a concern at first, but you soon get used to putting a finger over the hole at the back of the moulding as you drop the payload into the waiting apertures. The pellets themselves are what stop the inner rotor from turning back against spring pressure and the small locking catch is no longer fitted; this makes it completely self-contained and no longer relies on the rifle’s action to operate the internals. Loading up is very easy, as the slugs are just so big - anyone who struggles with .177 pellets will love this rifle!

Other standard BSA features are the adjustable two-stage trigger and the safety catch that is above it on the left. The catch is pushed forward for SAFE and back for FIRE. When charging, the filling probe is inserted into the port at the front of the blued air reservoir and is protected by a screw-off cover. The overall feel of this Scorpion SE is very good and looks fit for purpose in a rugged, no nonsense sort of way. The synthetic stock makes it ideal for an air rifle that is to be used in the field, but I’m sure owners will appreciate it enough not to knock it about too much!

As I might be shooting in dimly lit farm buildings and at dawn and dusk, I mounted a new Hawke Nite-Eye 2.5-10 X 50 scope using Sportsmatch mounts. The optic features Digi-IR whereby the illumination level is set by push buttons mounted on the top of the eye bell; there are 24 levels of brightness and it’s possible to switch from red to blue instantly as conditions dictate. It also features an auto OFF system, which would be very handy as I usually forget to turn off illuminated reticules after using them! I thought the scope’s 50 mm ocular lens would suck in plenty of light and would make for an ideal partner for the SE. The glass etched ballistic MAP 6A reticule also had plenty of aim points, which would probably come in handy due to the relatively pronounced trajectory of the heavyweight pellets. The Nite-Eye really worked well and is to be recommended.

I always chronograph rifles as soon as I receive them and I checked the Scorpion’s power before my trip to my vermin shoot. Using 19.9 grain H&N Field Target Trophies it was producing plenty of power for pest control, whilst still being comfortably below the 12 ft/lb limit. I usually test an air rifle on a range before taking it out in the field, but I was confident the action was producing consistent power, so set off for an early morning visit to the farm. I’d charged up to the recommended 200 bar and loaded 8 pellets into the magazine. I obviously had to sight in the scope/rifle combo and set out a target card at 20 yards, I had a perfect zero after 8 shots and then checked where pellets fell at 10 and 15 yards as well. I would normally spend a long time shooting a rifle before I use it against anything with a pulse, but I was confident enough in the rifle, scope and pellets to take a feral pigeon at just under 20 yards as it flew into the farmyard near to where I sat. An FTT in the back of the head proved effective to say the least and the pigeon knew nothing about its sudden demise. Over the next couple of hours 5 more ferals landed, and they all ended up as fox bait. I was delighted with the .25’s performance. Six kills with six shots was rather pleasing and certainly proved how effective the fat pellets are.

A few days later I went to Pete’s Airgun Farm in Essex and fired 500 pellets without a single misfeed or problem. I was extremely pleased with the accuracy, with both H&N FTTs and Milbro White Rhino pellets. The FTTs were slightly more accurate at 50 yards, but at normal hunting ranges there really wasn’t anything in it. A mate of mine also produced some tidy clusters at maximum range and 40mm spinners were no problem at all. There was another shooter there who was shooting a custom BSA Scorpion and he was very impressed too, so thumbs up all round. Another trip to my shoot a few days later resulted in a rat and a parakeet being taken by the Scorpion SE.

Well, BSA have another winner on their hands with the Scorpion SE .25 mulishot. It’s a hard-hitting vermin control tool, which will be just what a lot of shooters have been waiting for.