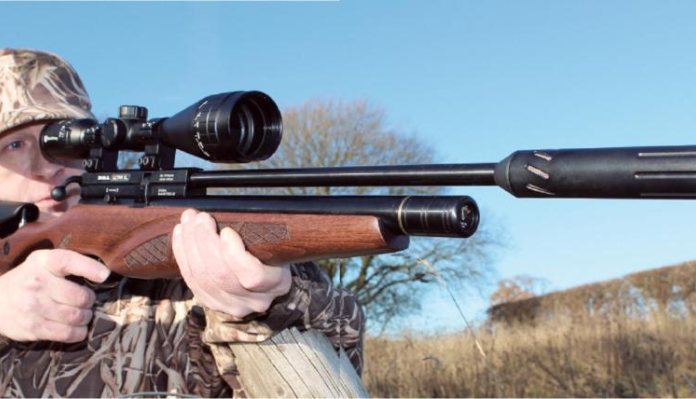 Since the initial launch of the BSA Ultra over a decade ago, this ultra-compact multi-shot PCP was an instant success. The original featured quite a few innovative operational features – these incorporated a ‘drop-lever’ loading system and the rifle was cocked by depressing a large plunger at the very front. This was developed from another BSA PCP, the Hornet, all with the intention that the minimum amount of movement was required by airgun hunters when using the rifle. Although these were quite ‘left of field’ design features, undoubtedly the major selling point at the time was it was one of the most compact carbine size PCPs on the market.

Not surprisingly, the Ultra continues to this day, but over the years the action’s been modified and upgraded and it now uses a more conventional bolt action for cocking and loading. Even so, until recently all variants of ‘Ultra’ have always maintained the carbine sized proportions that certainly helped it earn its popularity. This nicely brings me to the rifle here on test, the Ultra XL, quite unique when you consider its name, as it’s more of a midi-size sporter compared to its very diminutive relatives. Also, the action sits in quite a radical stock, that’s configured to offer shooters a platform that can be tailored to suit headeye- scope alignment, has a thumbhole ‘target style’ pistol grip for better trigger control and a lengthier forend for those who prefer a more traditional ‘sporter’ leading hand hold.

The ambidextrous, dark brown stain beech wood stock boasts features that many hunters (myself included) appreciate, due to the benefits they offer in aiding precision shooting. They also immediately grab the attention on initial inspection; those being a black synthetic height adjustable cheekpiece (adjusted and secured in place by two generously sized Allen bolts recessed into the right-hand side of the furniture), the very ergonomic and quite lengthy shallow rake, plus a generously sized ‘elongated’ thumbhole.

The configuration of these features is quite like the butt section seen on certain models of Gamo air rifle. I mention this, as it’s no secret that both companies have had a long and mutually beneficial partnership, so maybe a good design has been recognised and ‘shared.’ But that’s by the by, because coupled with a thick black full rubber butt-pad, which gives a snug shoulder fit and the steep drop down yet quite ‘slender’ pistol grip, all combine to give you total control and enough adjustment to suit those who know the importance of correct scope/head positioning.

Now the forend is a more familiar BSA design as it uses a similar contouring seen on certain other models in their range; this well-crafted inward sweeping contour begins just forward of the trigger guard, where the woodwork is much more ‘thickset’ than the butt section and certainly the pistol grip. It also tapers progressively inwards and upwards (width and depth) as it sleekly runs forwards to end with an angled back tip. Both grip and forend have panels of laser-cut, skip-line chequering and along the fore section these are very practically set out to suit any leading handhold.

Also, to accommodate the ‘longer’ action (more on this later) the stock is obviously not as compact as its relatives but certainly not overly long and when you consider the dimensions of the action, I’d say the stock and metalwork are pretty much ideally proportioned for handling and balance. A company first, is rather than setting the air gauge into the stock they’ve used a forward facing ‘manometer’ type, which sits at the very end of the air reservoir. It’s also very well protected being deepset, plus having a generously sized rim of metal around the outer rim to help prevent it from knocks and scrapes. For charging the rifle, moving back along the air reservoir, you find a rotating collar that protects the inlet port that takes the company’s familiar quick fill probe. A recommended fill of 232bar returns approximately 60 shots in .177 calibre (as per test rifle) and 80 shots in .22. So, without wanting to state the obvious, the longer air reservoir (which in turn needs a longer barrel) are what makes this dare I say ‘Ultra Large Ultra’ longer than its stablemates; not forgetting of course the reservoir can hold more compressed air, therefore affording a higher shot count.

Apart from the changes to the action (length and air gauge position) as outlined earlier, the company have very wisely stayed with ‘tried and trusted’ mechanics for cocking and loading. These being a neat ‘blacked’ Bolas Bolt sits at the rear of the action block. As usual, it has quite a lengthy pull back before it fully engages the trigger sears. The lengthy cocking action is due to the fact its integral loading probe must fully withdraw from the breech and magazine to either allow the next pellet to index around for loading or the magazine to be removed. Talking of which, gone is the magazine retaining catch that was a one-time feature of the system, meaning the magazine can be removed from the left of the action immediately the bolt is in the fully rearward position.

As you’d expect, like other BSA PCPs, the Ultra XL uses the now up-graded self-actuating 10-shot removable magazine, which has a colour-coded, high impact polymer inner rotor, plus it’s also numbered along the top, so that you can keep a check on your ‘ammo store.’ The ‘rotor’ is coloured blue in .177 calibre, red in .22. A thoughtful inclusion is the finger groove in the forward section of the outer casing (back plate) which makes it easy to ‘grip’ with cold or gloved fingers for removal. The new-look magazine operates far smoother than previous designs, but for filling the ‘mechanics are the same. This requires you manually rotate the inner exposed ‘rotor’ so you can thumb a pellet into each chamber as it appears.

Once all 10-chambers are filled, you then simply slip it back into its housing, and push in the cocking bolt. The rifle’s now ready to go, so it’s wise at this point to engage the safety. Incidentally, another addition to the magazine design is the inclusion of a small circular aperture towards the bottom left of the face plate – it’s positioned to be seen even when the magazine is in the action and shows a white dot indicating when you’re on your last shot. I make a point of detailing these relatively new features because it’s this type of attention to detail that can make a lot of difference to how any air rifle helps the shooter function more effectively in the field, as you’re not having to think too much on the ‘status’ of your ammo reserves, as you can visually check in an instant – so for that full marks BSA!

Incidentally, if you think the lack of a magazine retaining catch could cause problems, have no fear. The magazine slips into the housing very snugly, guided in by two protruding metal ‘wings.’ Once in the action, the magazine’s locator pin centrally positioned on its oval right outer edge mates up with a dedicated aperture on the far right of the housing ensuring it’s perfectly aligned for loading. Also, the inclusion of internal magnets ensures it’s not going anywhere, as they securely hold the magazine in the well – as well! Don’t interrupt!

Topside, the action block has the familiar uninterrupted flat receiver that BSA use for scope fitting on all of their PCPs, making this one of the few multi-shot air rifles where you don’t have to bridge over a protruding magazine, so you can fit almost any optic of choice. For test, I decided on using a Nikko Stirling Panamax 4.5-14x50AO; quite a substantial optic but one that paired up with the rifle very nicely indeed, without affecting the gun’s inherent handling characteristics in the slightest.

That nicely brings me to the rifle’s 2-stage adjustable ‘match’ trigger mechanism, which shows a few modifications in both style and ‘feel. The slightly curved metal blade has a ‘flat’ and ridged front face, which helps give the operator an assured trigger feel. Also, the manual trigger safety lever positioned top right compliments the unit ideally, as it’s a no-nonsense solid and positive operating mechanism — pull back to engage and push forward to put the rifle into live fire mode – the letters ‘S’ and ‘F’ being clearly seen etched in white on the action block directly above the lever’s dome shaped head.

I’m sure many will be amazed at the accuracy potential and shot to shot consistency of this rifle, as the rifle isn’t fitted with an air regulator – rather it uses a self-regulating valve system. Shooting from a rested position, I was soon making tight ½-inch clusters out to 30-yards, which didn’t open up that much when I pushed out to the 40-yard mark.

However, this is what we’ve come to expect of any BSA PCP, as the inherent accuracy not only can be credited to the super smooth trigger release, but also the free-floating Cold Hammer Forged Barrel. As many agree, BSA’s own in-house tubes are manufactured to the highest quality and in the case of the barrel used for the Ultra XL it’s no exception. A stylish removable ported muzzle brake sits up-front protecting the threads of the ½-inch UNF screw cut muzzle. For most of the test, I teamed it up with a Milbro Huggett can, and the report on firing was tamed to virtually zero!

With BSA already having such a comprehensive roster of PCPs, it’s a valid question to ask why the company launched the Ultra XL, what does it offer that warrants its inclusion? Well, the obvious feature is the stock, due to it being unorthodox in the sense it’s a hybrid of what can be termed semi-target and sporter design. Granted, the furniture of the BSA Goldstar SE is unrivalled in respect of the range of adjustment for cheekpiece height, angle, butt pad position – which also allows it to extend to alter the reach to pull – not forgetting the addition of a very well deigned and removable hamster for your leading hand hold. I fully detail the range of adjustments that the rifle’s stock offers, because many hunters might and do consider that overkill!

With that in mind, consider the additions to the Ultra XL by way of its clever blending of what is quite a slender butt section that offers you a heightadjustable cheekpiece that works perfectly with the elongated thumbhole for steering the ship, trigger control and of course no problems for attaining a perfect eye-scope alignment. In fact, I reckon this is much more the type of design that hunters and HFT competitors will find to their tastes, plus the forend is ideally configured and proportioned for those who are used to/and or prefer a more traditional sporter feel for their leading handhold. It’s light, handles and balances superbly well, is very accurate and fitted with a suitable ‘can’ of choice will endear itself to any hunter who tries one; and for the price, I say we all owe it that much.

So, for a definite conclusion, in my opinion the BSA Ultra XL fills a niche, certainly if you dislike buddy bottle fed rifles, because it’s the ideal option should you want a reservoir fuelled PCP that offers a very respectable shot count, plus has a stock that is very thoughtfully featured for adjusting the key areas to suit your particular build and cater for any scope choice, which in turn enables you to fully ‘focus’ on taking the shot.

Is a big one better? Well, in this case, it’s certainly an option and at risk of slipping into ‘Carry On’ territory, I’d highly recommend having one to hand– fnarr, fnarr…