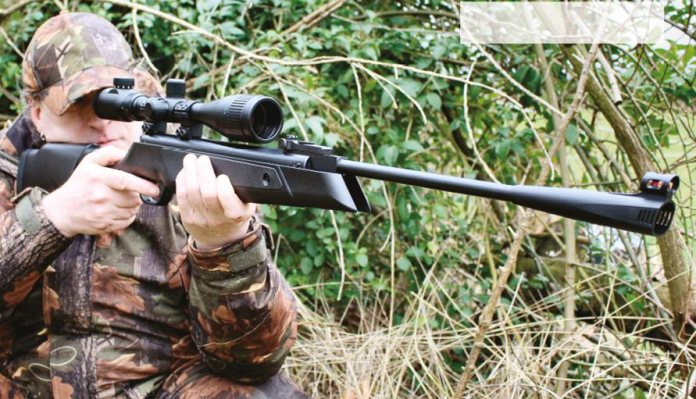 Spanish gun manufacturers Cometa have now given two models of their established springers a ‘facelift’, or to be more specific, the option to purchase them in a new design synthetic stock. The rifles in question being the budget priced but full power 220 Galaxy and their flagship, the Fenix 400 Carbine Galaxy. Those who know their products will notice the addition of the word ‘Galaxy’ - this is used to signify these are the synthetic options of their wooden stock counterparts. On test is the introductory level 220 and although one of their most basic rifles, it not only ably showcases the synthetic stock design but in this livery proves itself to be a handy little lightweight and very cost effective hunter.

OUT OF THIS WORLD

I must admit that I wasn’t expecting the 220 Galaxy to be much different from its wood-stocked relative. However, I couldn’t have been more wrong, as the furniture is of a completely different design, and perfectly complements the action and its general handling characteristics; as well as making it more cosmetically appealing. Now, I should explain; this isn’t a cheap ‘n’ cheerful looking moulding, nor does the material it’s made from look or feel flimsy. It’s well up to the standard we’ve now come to expect from rifles of this genre and the overall design has been equally well considered.

The ambidextrous stock has a chunky but low profile cheekpiece, with a full, thick, black rubber butt pad, while the pistol grip has a slim neck and relatively shallow rake. The forend is slim with a well-rounded underside and is nicely proportioned to be in keeping with the rest of the stock and finishes at the front with an angled back tip. Lengthy raised panels of stippling are positioned along either side of the forend and the grip. Although it’s a relatively skinny offering, initially handling the rifle for using the open sights, it balanced well and although only weighing 6.2lbs un-scoped, felt sure and secure.

The open sights are the familiar Hi-Viz fibre optic enhanced design, having green bars either side of the U-notch of the fully adjustable rear unit and a single red insert for the hooded blade up front. It’s here the rifle is fitted with what at first appears to be a stylish and substantial muzzle weight. However, as the muzzle ends within its length, it did later in the test show itself to help reduce the signature a little! More on this later, but as I was soon to discover, it definitely did act as a useful cocking aid. Shooting it straight from the box, the 220 Galaxy showed itself to be accurate enough to be used for open-sight hunting, such as close-range ratting or feral culling out to 12yds or so.

The barrel was quite difficult to unlatch for cocking, which I put down to the breech jaws being over tightened upon assembly. Probably not a trait all 220’s share, but it’s something that can happen to any mass produced budget priced springer. Due to this, the cocking stroke also felt ‘stiff’ for the first part of its travel. Saying that, it wasn’t overly strenuous a task once the barrel had been drawn approximately a third of the way along its travel back to lock up. At this point, the auto-trigger safety at the rear of the air cylinder also engages. Little more than a wide ‘shaped edged’ metal ‘plate’; it pops out rearward in readiness to be disengaged with the thumb of the shooting hand.

I must mention at this point; the breech uses the old-style, stainless steel ball bearing detent lock. When I saw this, I pondered if this could be a reason the breech jaws are purposely made to be a tad tight, as this type of mechanism isn’t usually known to be the strongest of designs. However, whichever it is, the lock up when closed is solid and certainly airtight, so you can rest assured you’ll have no problems in that department.

After my initial session using the ‘irons’ I scoped up with a Tasco Target/Varmint 2.5 - 10 x 42AO IR in high mounts. It was at this stage that I noticed the 220 only has a very short run of dovetails, so scoping up needs to be done with consideration and for some optics might require the use of reach forward mounts.

The 2-stage adjustable trigger unit is basic but practical and certainly doesn’t let the rifle down, as it has quite a predictable release. With a 25yd zero setting, the best groups I managed were just over 1” centre-to-centre! Recoil would be best described as ‘snappy’ but manageable and muzzle report for most will be considered very acceptable for a rifle in this price range. It’s here I must again mention that although not a silencer ‘per se,’ the design and construction of the muzzle weight could well have a hand in helping quell report, albeit unintentionally. I say unintentionally, as Cometa now also offer their wood-stocked, 220 Carbine with a ‘true’ sound moderator fitted!

There’s nothing inherently wrong with the Cometa 220 Galaxy and to be fair, it doesn’t have as many little niggles, as you’d expect of an air rifle in this price range. In fact, I’d say Cometa have certainly upped their game over recent years and this budget priced introductory level springer certainly is a fitting example. Without a doubt, the well designed tactile synthetic stock helps it rise up above the ‘cut price’ competition, transforming this springer from a rifle you could easily overlook as you peruse the gun racks, into one that has you stop and give it a serious once over.

Cosmetics aside, the 220’s solid and dependable action benefits from such a handle and operates far more efficiently than you might first expect! It balances extremely well, is light and as accurate as you require from a general purpose close to medium range hunter.