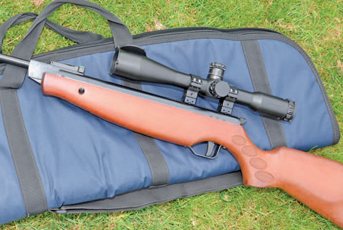 I’ve always had a soft spot for the Spanish manufacturer, Cometa, and I think that stems from a couple of particularly nice rifles that I happened to test a good few years back. They left an impression alright, but they’ve also been a hard act to follow ever since.

On test here is one of the smaller models in the range - the established model 300, and it’s a typical offering from this most traditional of company’s. Several revised design features are included though, that are a definite improvement over the old, and first impressions are of a slickly made, fairly modern looking airgun.

Overall dimensions seem well in proportion, and with open sights of the fibre optic variety, we are talking very well appointed sporter here. The 300 is a break barrel spring/piston design of course, and as such, is wonderfully straight forward for any beginners to our sport. The compact nature of this one, means that it’s highly manageable by most. There’s no charging paraphernalia required here - just snap down that barrel, push a pellet into the breech, aim and fire! The time-honoured fast fire action holds fond memories for most of us that began our shooting days with just such a gun, and I certainly never tire of the sheer simplicity of the design.

Stock configuration is both stylish and practical, with a nicely raked, fairly thin pistol grip, sporting small chequered panels, which form an original design as well as aid actual grip. The fore-end is nicely tapered at the tip, and a deeper section of wood just forward of the trigger, means supporting standing shots, is a slightly easier task, than with some alternative models. An attractive coat of varnish really helps the visuals, with plenty of grain pattern still visible, and overall, the standard of the woodwork is spot on. In fact my only complaint here concerns that curiously hard rubber pad.

Why several manufacturers these days seem to think that a rock hard piece of rubber is acceptable as a butt pad, I’m not entirely sure - yet it seems to be a growing trend!

Close inspection of the metalwork reveals some precisely machined components,  highly polished, and expertly blued. The end result is a gun which is not only extremely pleasing to the eye, but one which anyone should be proud to own.

Fitting a scope is an easy task here, courtesy of the extensive scope rails machined into the top of the receiver. That said, no locating holes are provided, to accept an arrestor block or such like, which is just something worth noting. ‘Scope creep’ is of course the phenomenon of a scope moving, either within the mounts, or the mounts moving along the rails, as a result of the recoil generated by the spring and piston. It’s typically a two-way whiplash action, as the piston hits the bottom of the compression tube during the firing cycle, and the ‘creep’ happens to a greater or lesser degree, dependent upon the rifle. Either way, the addition of a small arrestor block if necessary, placed up against one of the mounts, should normally rectify the situation.

Of course, before jumping to fit glassware, those fibre optic sights do warrant some consideration. The sight picture is excellent, with green elements forming the rearsight, and a red element set within a hood, making up the foresight. However, despite a fully adjustable finger wheel design, it soon became evident that the plastic mechanism on the test model’s rear sight was incredibly stiff. Possibly just an issue with my example, but an observation nonetheless.

And so to the range. Cocking this model 300 proved a bit more fiddly than I imagined, simply due to the stiffness of the breech breaking open. Jolting it open over my knee proved the best route, and I would expect this to ease up with use. The actual cocking stroke itself requires little effort, yet with a pellet pushed into the lip of the rifling, locking the barrel back up again was also a bit fiddly, but this is all preferable to a slack breech, and a measure of the tight tolerances involved around the breech area.

Cometa’s inclusion of a new broad trigger shoe is a great improvement, and with more of the pull weight spread over the flat blade surface, the final release was well above average for a gun of this type. A small amount of sear creep was still felt when deliberately aiming for precise grouping, but nothing to worry about.

As for handling, the Cometa 300 tips the scales at 6.75lbs, and with fine balance centering about five inches forward of the trigger, and that previously mentioned deep section of fore-end, forward of the trigger, this model really feels right in the aim. Yes cocking is sluggish, but the firing cycle is impressively quick, with little vibration, no spring twang, and modest recoil. A handily placed manual safety catch sits to the rear of the cylinder, and here a relatively new rocker design is a slick operator indeed.

As for performance, over the chronograph, 10 shot strings returned absurdly consistent figures, with 6fps (using Air Arms Diabolo Field) quite typical, even with a variety of ammo.  Accuracy wasn’t quite so hot though, with the best groups achieved being around 1.5inches, and many stretching to 2inch. Again, I persevered with a variety of pellet brands, but the 300 resisted the opportunity to shine.

All things considered though, it’s horses for courses, as the old adage goes, and I certainly enjoyed getting reacquainted with this famous old Spanish brand. Consider that fair asking price, and the build quality alone dictates that this Cometa is good value for money, either as a starter gun and plinker, or for close range pest control.  GM