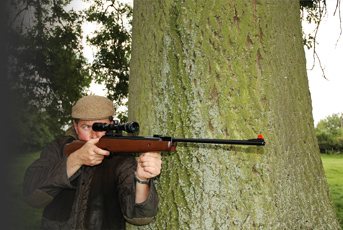 Having started up my own airgun club a while back, I now regularly get asked the same sort of questions from novices and newcomers alike. What’s a good starter rifle that offers a good standard of performance, yet won’t break the bank?

It’s a fair question too, as shooting is much the same as many sports, in that major investment in kit is foolhardy at the outset, before a toe has even been properly dipped in the water. In other words, going out and spending hundreds of pounds on cutting edge technology, before fully knowing that a particular branch of our sport is really going to appeal, is a risky business, and could be costly in the long run.

Striking a compromise is the name of the game here though. Budget gear is all very well, but take it from me, there’s some really rough kit out there at the bargain basement end, and whilst rifles for around the £50-£60 mark may seem like the bargain of the century, their performance is in my experience, invariably grim! A fool’s economy I believe it’s called, and we’ve had a few new members turn up with these oriental atrocities…

OK; you’re in the market for a spring powered air rifle, yet you don’t want to spend a small fortune. You’ve decided that the simplicity of a break-barrel design also makes sense, but you’re bewildered by the choice available.

Take the proper route (as with any sport or interest), and get along to your local club to chat with experienced users at the sharp end, BEFORE investing hard-earned cash.

Turn up at our club, and I’ll now probably direct you towards the gem that’s on test here - the Cometa Fenix 400.  I can honestly say that this rifle has been something of a revelation, and it’s changed my rather set views about who puts out the quality on the market.

OK, Weihrauch still largely rules the roost with the sheer range and quality of their spring powered offerings, but they don’t do cheap, and this Cometa has to be one of the best break-barrels outside of Germany - yes it really is that good!

I’ll tell you something else from the outset, because accuracy stems from such aspects - this rifle also sports a damn good trigger!

Imported by John Rothery, these Cometa rifles herald from the Spanish firm of Bascaran - apparently a family run concern of some 70 years standing.

Prior to getting my hands on one of these guns, I’d subconsciously acknowledged those adverts, appreciating the close ups of the wood to metal fit, and the overall impression of a no-nonsense, solidly engineered, traditional air-rifle. Well, with the tangible wood and steel now finally in front of me, I can report that the finish really is as good as it looks in those ads.

Starting at the woodwork, the stock is remarkable, bearing in mind that the wood is beech. Often bland and coated in a thick varnish when used on many rifles, this Fenix model somewhat bucks the trend, offering both attractive figuring, and a subtle, matt finish that doesn’t hide the genuine beauty of the wood - and the shapes not bad either! A fully extended forend shrouds the breech arrangement, adding a feeling of solidity, as well as greater options for a comfortable grip in the aim; whilst the well proportioned pistol-grip incorporates panels of chequering. The pattern may well be pressed, but it’s neatly done, and does its job, and given the relatively modest asking price of this model, is well up to spec.

A pleasantly shaped, raised cheek-piece, is given a right hand bias, with a black rubber pad completing the package.

My test model was supplied in .177 calibre, with a full length barrel, although a shorter barrelled carbine ‘s’ model is also available, coming complete with silencer. Where my model differed from the advertisement regarded the open sights. The test example came fitted with fibre optic style inserts that provided a nice bright fluorescent image; the theory being that any available ambient light is utilized and maximized to the full – thereby enhancing the sight picture. In practice they were highly usable, but the overall quality of this gun demands that you basically stop messing around, and in this case, ignore those sights completely and fit a scope! Bearing this in mind, it’s a point of note that the fore-sight could be cleanly removed with a single screw, leaving a sleek, clutter free barrel, and a purposeful profile.

All the metalwork was blued to a very high standard, which doesn’t include the trigger and guard. Why? Because they’re plastic! Now I’m not too keen on plastic, but all I can say is that the moulding is solid and crisply executed, and more importantly, the trigger gives a relatively light release, which makes accurate shooting fairly easy to achieve.  There is some creep in the unit before the sears trip, but it’s predictable and offers only minor resistance – and believe me – I’m fussy!

Mounting that scope should be a simple affair, as twin sets of arrestor stud holes are machined into the top of the receiver. This means that any scope mounts can be locked in position giving peace of mind, and ensuring a solid zero is maintained. Not that zero shift is particularly likely, as a mild mannered action is another welcome feature of this very capable rifle.

Breaking that barrel and cocking the action generated some curious squeaks and noises (probably just needing a little oil on the joints); yet I couldn’t care less, as firing revealed no such problem - just a slick crisp snap of the action, and the shot was on it’s way.

Pellet wise, I chose to use Daystate FT (currently one of the most successful pellets on the market in competition), and the evergreen Dynamit Nobel Superdome. Electronic power testing showed consistency was highly creditable with both brands giving five shot spreads of 11fps and 12fps respectively, yet only one would shine in the accuracy test. Basically the Fenix just didn’t like the Daystates; and I have to admit, they did seem a little loose in this barrel. The Domes however, were different again, and went on to show just how capable this gun is - with 3/8inch groups at 30yds.

This rifle deserves to do well. It offers a traditional format, with great build quality and excellent performance, in a stylish package - all for around the £160 mark.

That trigger probably has a lot to do with it, but this is easily the most enjoyable spring rifle that I’ve used in a long while, and well up to both hunting duties or even HFT spring rifle class - praise indeed!