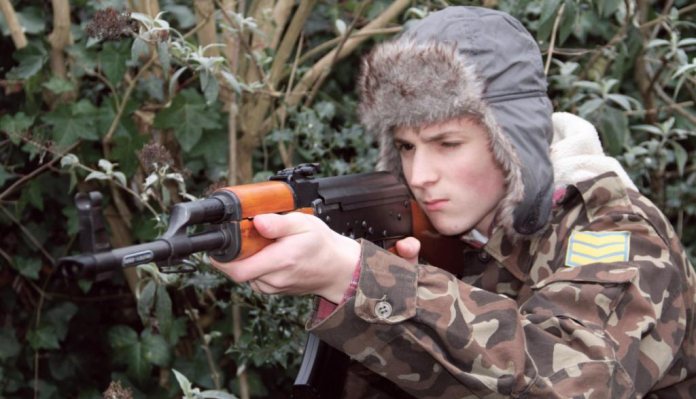 With the ever increasing restrictions on de-acts and welding up operating systems, people are now turning to authentic looking air guns or BB firing versions of their favourite military styled gun. Cyber guns have a good reputation for a blend of authenticity and function at a good price, Sports Marketing are the importers and their new AK47 BB firing version is a real corker.

I am not a military buff but my kids eye’s really lit up when the parcel was unwrapped. It feels, looks, weighs and operates like the original. Real metal, finish and real wood that from a distance looks exactly like the original. Eldest son Jake helped with the review and gave me a teenager’s perspective.

I wanted to test its performance, though not just as a good replica, so here goes…

First of all, is the very good battle-worn or realistic blued finish this AK47 has. It looks incredibly real with all the right rivets and depressions in the pressed steel sheet stampings used to form the main action section. It field strips like the original too. First, depress the small button at the rear of the top cover, which allows you to remove the top cover, revealing the cocking lever. This is purely for show only and is not used to operate the gun at all but is more realistic than the new spec de-acts now available. Depress the bolt spring and out comes the bolt and faux gas piston and shows the inner workings of the AK. Like the original but not! So, easy to clean or allows rogue BBs not to foul the system.

The trigger is, as you would expect, a two-stage military type with heavy trigger pull, 6.5lbs on test, but you soon get use to it and you can judge the let-off point pretty well after practice. The safety is like the original with a long lever to the right side of the action. Up is safe and blocks the bolt’s total movement and on this copy disengages the trigger. The mid position is full auto on the original, not on this and at its lowest position is fire.

The magazine is in two parts; the outer shell of plastic and not as realistic as the rest of the gun. Into this sits the combined magazine BB feed and CO2 cylinder cradle. This is probably the only part I dislike on the whole gun, as it is quite frankly a pain to get the two apart. You have to depress a small button whilst pulling at the inner mag to slide the two apart. It needs a clip or release lever on the side in my view but let’s carry on.

With the inner section removed, you unscrew the plunger and pop in a CO2 bulb and re-tighten until the unit is tight and no gas is heard leaking. Now depress the sliding/sprung magazine feed plunger and lock into the recess and place in 18 BBs, .177 (4.5mm) copper plated steel ones in this case, which came with this sample.

Release the slide to tension the BBs in the carrier and replace back into the outer mag shell and insert into the rifle, ensuring that the large release lever is pushed flat, otherwise the mag will not seat properly.

Now remove the safety and every pull of the trigger shoots a BB down the barrel, simples!

Nothing from the outside tells you this is not an original except a sticker to the barrel that states its energy: 1.9-joules max. You have the correct gas system and sling swivel attachment and foresight and even the barrel muzzle deflector to stop right hand barrel rise as you fire fully auto on the original. Barrel length is 17-inches from chamber or seal end to the muzzle or 18-inches including the muzzle deflector. It is a smooth and oversized bore, so the BB travels freely, you can roll a BB down it and it saves on blockages.

The rear section has a large 1 cm orifice and rubber O-ring that seals against the magazine and allows the BB to self-align down the barrel.

Sights again are good; the foresight has the elevated position to raise it above the gas operating system and has an open ear protective sight and simple post element. The rear sight has no windage adjustment but has the typical ramp elevation system. Range is indicated with the sliding increments of 1 to 10 originally for 100 to 1000-metres – optimistic! However, they work fine at shorter ranges, see results table.

Again, a very realistic look and feel, primarily due to the use of real wood. Looks like a type of beech to me but close grained and light with a typical orangey high gloss lacquer, so very authentic.

The stock is split into three sections with a short butt section that has a short length of pull at 12.5-inches, like the original. It has a very simplistic form, with the look of the old SMLE butt and a plastic heavily grooved buttpad. It’s perfect for the open sights as your cheek is low on the stock and your eye aligns well with the rear and fore sights. Actual grip is via the non-chequered pistol grip, very slim and plain but actually very comfortable and true to the AK47.

The forend grip is in two parts and forms the lower section to grip, with a slight rear lip to hold the palm of the hand and the top section straddles the mock gas action operating system. This whole stock, coupled with the battle worn/blued metal parts make it incredibly realistic and very hard to tell it’s not an original or de-act.

I wanted to test accuracy, speed of firing and total shots obtainable from one CO2 bulb, in this case the standard 12-gram size. Accuracy, as you would expect was back garden fresh, i.e. good for rolling over tin cans and matchboxes. At 10-yards, the group’s size was between 1.5 -2.0-inches, which is more than good enough. Zero-wise, the sight set at 2 on the rear sight allows a low grouping at six-yards, whist on the 4 mark the shots went 1.0-inch high. On 3.5 setting you were on at six-yards and on 5 you were on at 10-yards.

Cyber gun state a velocity of 380fps, which translates to 1.76ft/lbs energy from a 5.5-grain copper plated BB. With a fresh bulb, I had an initial velocity of 400.1fps for 1.96ft/lbs energy but this soon dropped as the BB digestion continued to 279.7fps. after 14 shots (not full mag) You then stop shooting and wrestle with that magazine and reload. Velocity climbs back to 351.3 and then 19 shots it is back to 260.6fps. This shows, as with all CO2 guns, the rate of fire has an effect on CO2 pressure as you fire and when you stop for any time the pressure rebuilds. But in truth at 10 yards the targets showed very little difference to point of aim.

I continued with this- see table for a total results for six magazines of BBs. At the third mag, starting fps was 338.4fps, fourth mag was 324.3fps, so starting to drop and at the fifth magazine was 323.1fps and finally at six magazines shot you had only 268.0fps and finished at 84.59fps and bounced back at me; this shows why shooting glasses should be worn!

So, a total of 104 shots, of which five magazines full were still on target at 10-yards (see target) and only at the sixth mag did the shots start to drop below the point of aim.

I was very pleasantly surprised at the quality and operation of the Cyber gun AK47 with very few miss-fires and adequate accuracy for back garden fun. Despite the awkward magazine system, if you are looking for a very authentic AK 47 that you can shoot then this is the top choice in my view.