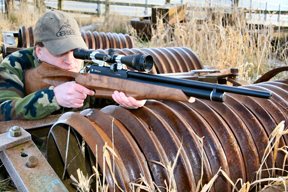 Each time Daystate change their rifle roster they upgrade both internally and externally, with the mechanically operated Merlyn ST here on test being no exception. However are these changes making a difference in relation to bettering the overall performance of what in effect is outwardly the same action running the same magazine system? Let’s see…

The cheek piece is a most unique feature of the light brown Grade 2 walnut stock, a high right hand roll over design that sweeps back and upwards towards the rear, enabling the shooter to obtain optimum eye-relief and cheek weld for the scope. The underside at this position curves upwards then sweeps dramatically down to meet the well-curved, ventilated black rubber butt pad.

The thumbhole stock shows a generous width thumb channel on the rear/right of the grip. Not only does this allow for the ‘thumbs up’ hold but also offers easy access to the manual safety lever sited on the rear of the action block. The pistol grip drops down quite steeply and is adorned either side with a panel of deep-cut chequering ending in a rosewood coltsfoot with white wood spacer.

Running along the lower part of the forend from the trigger guard forward are deep finger recesses that taper and shallow off towards the front. They offer a useful alternative for the leading handhold allowing your fingers to fall naturally into and along them. Just forward of the air gauge there’s another run of equally deep cut chequering underneath bearing the company name. This might seem a tad unnecessary but upon handling you appreciate this allows two distinctly different leading handholds. This is something both hunter and HFT (Hunter Filed Target) competitor will appreciate when taking up an awkward position for a tricky shot.

The Merlyn ST is charged like the Daystate ‘X2 range’ via a bayonet connection at the front of the air reservoir. The connection is sensibly protected and covered by a chunky, metal, push-fit cap. Once this is removed, the rifle is easily filled to the required 200-bar. You can expect approximately 140-shots in .177 (as per test rifle) and 110 in .22 calibre. Impressive for such a relatively short cylinder, which is due largely to the upgraded internals which I’ll detail later. The air reservoir, like all Daystate rifles is totally rustproof thanks to the process whereupon it is first zinc-coated then treated to a two-pack paint finish inside and out.

It’s not only the efficient multi-shot capability that shines on the Merlyn ST. The action has been refined and re-modelled from the original, and there’s a lot to look over even before you get into scrutinising the magazine system.

Firstly, you can’t fail to notice the large and ergonomic chrome cocking bolt. This ‘runs’ the rifle and in part the magazine, first cocking the striker on the rearward pull, then when pushed forward probing a pellet from the magazine into the breech. The magazine is sprung, so a lever in the loading bay of the action ‘cams’ the rotating inner drum of the magazine on the rearward stroke of the bolt.

The magazine comprises an aluminium inner drum with a synthetic plastic outer casing – it’s neat and works a treat. Of all the feed systems from the various manufacturers - Daystate’s does stand at the top end!

The other feature that shouts its presence is the trigger safety. This is a well sized, red lever at the rear of the action and works by blocking the trigger blade. It is easily operated with the thumb of the shooting hand - even in the firing position - thanks to the generously sized thumb channel. Flicking it to the left puts it on SAFE and a short quarter inch movement to the right puts it in FIRE mode.  Neat and practical!

The 2-stage trigger is highly adjustable being made all the better for having a set back polished alloy blade that can be set to the left or right. Nicely curved and coupled with the pistol grip shape and angle thumbhole configuration really offers a high level of trigger control and sensitivity.

As a hunter first and foremost I’m always concerned with the firing noise on an air rifle. Inspecting the end of the barrel shroud shows an end cap. When removed this reveals internal threading to accept the silencer adaptor available as an optional extra, so you can spin on a standard ½x20” UNF moddy of choice. Interestingly, Daystate have now developed a ‘reflex’ design, the Airstream IV which sleeves back over the barrel to only add 3 ½” to the overall length of this 39 ½” carbine. Expect full news and reviews on these new cans soon.

However, for test I didn’t bother with a secondary can, as the integral, primary baffle system in the barrel shroud brought report down to a very acceptable level. The rifle came scoped with an MTC (Optisan) Cobra 3 – 9 X 42AO in silver BKL mounts. This was a good pairing for this 7.8lb chunky carbine so it stayed onboard.

With the first few pellets into the test I was soon appreciating everything I’ve previously praised. After setting zero the free floating, Match Grade, Lothar Walther tube with its supporting band at the front of the air reservoir was punching pellet in accurately. In terms of performance, for an un-regulated rifle this is surely one of the best I’ve tested. Setting zero at 30-yds gave one-hole groups throughout the flat spot of the charge.

Consistency, accuracy and the gun’s high shot count are due to the Harper Patented ‘Slingshot Hammer Valve.’ Suffice to say the hammer doesn’t touch the valve on firing but hits the outer rim. Inertia then sends it forward and it immediately comes back under air pressure and due to the design isn’t in any way hindered in operation by the hammer, as can be the case on other more traditional knock-open designs. This is what is at the heart of what Daystate term their new Mk4 internal valving system.

To sum up; the Daystate Merlyn ST is a joy to shoot largely due to the stock design as balance is spot on for this stylish, accurate and chunky yet compact carbine. I’m sure it’ll prove popular with both hunter and HFT competitor alike.