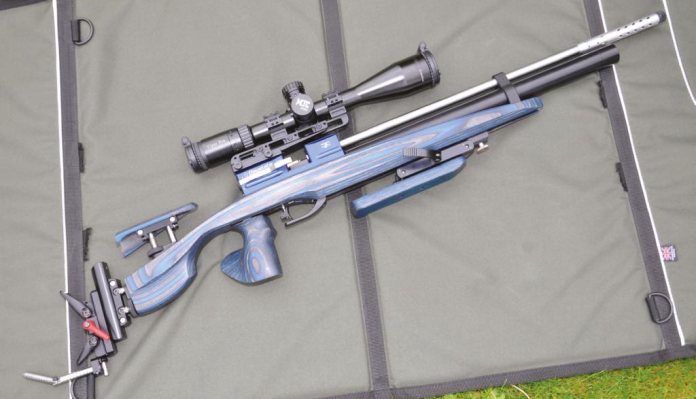 Field Target (FT) is quite rightly regarded as the flagship sport where outdoor airgun shooting is concerned! And with knock-down targets to navigate, right out to the maximum 55yards, both the competitor and rifle are tested to the limit. Only the best kit will do in this ultra competitive arena, and with an abundance of research and development undertaken by a select band of manufacturers, it’s understandable that these mega machines don’t come cheap.

Daystate have been a big player over the years in FT; indeed I was one of the first to purchase one of their early Field Target specials, in the form of the Huntsman FTR, and I secured a satisfying amount of silverware with it too, including (forgive my self indulgence) a rather special CLA Game Fair, in 1988. Yet, in recent years, the company has rather neglected this sector of the market, preferring to switch their resources to special editions, and products tailored more to the hunting fraternity. Exquisitely detailed offerings they may be, but the serious competition shooter could be forgiven for looking elsewhere, for their specialised needs to be met.

Hard to believe then, but Daystate haven’t had a full blown FT gun in their illustrious line-up for around 6 years now. On test here is the latest Tsar model, and this impressive piece of kit is set to redress the balance, as it offers the serious competitor dedicated FT features and performance, straight from the box. A welcome return then, to Field Target competition, for the company that effectively re-introduced the pneumatic to the modern era.

How times change! Where my old Huntsman FTR sported a fairly plain cylinder, and relatively simple walnut stock, the Tsar by comparison, comes simply bristling with high tech features, amazing adjustable elements, and an overall level of sophistication to surely please the most ardent of FT fans.

But then let’s face it; if you’re taking on the might of Steyr, Anschutz and Air Arms, for example, then you need plenty in the armoury. Having spoken to Tony Belas at Daystate, it seems the direction the company had taken in recent years, has made investing in the relatively small and highly specialised FT sector, more of a risk, not to mention distraction, when they were clearly specialising in other areas! But what if a joint deal could be struck, with another manufacturer, to share the development? Step forward Ataman, based in Russia, and several discussions and meetings at trade shows later, and project Tsar was born.

For those who appreciate quirkiness, each Tsar carries the name of a Russian Tsar, as well as a serial number, and with Ataman’s internal valving on board, metering power output, this model is indeed a genuine joint project.

Looks wise, there’s plenty going on. The muzzle brake is identifiable as Daystate, whilst the bold, chunky breech block looks more RAW in style; and to my eye, that’s a good thing. The blue anodised block looks good, and contrasts nicely with the stainless steel barrel. There’s a small loading tray that helps channel the pellet, and a slick side-lever, that needs little effort to cock, and closes very sweetly.

Look to the left of the breech block, and there’s a silver button, which cleverly allows for the Tsar to be dry fired. Just click it on ‘T’ for Training mode, and you can practise mounting the rifle, and tripping the trigger, without even discharging air.

Scoping up is easy, and if you wish to keep the sight line high, then an after-market high mounting (Infinity FAE-L50) rail is available for around £100, as supplied with the test rifle, from www.eaglevisioncam.com . These come endorsed by Daystate, but they will be making their own in due course.

Getting air into the Tsar is a simple operation, and via a small probe adaptor supplied with each gun. It’s actually really neat, and unusually, just clips into a standard Foster-style female hose fitting. As for fill pressure, Daystate recommend 220 bar, and with the Tsar’s super long cylinder, that equates to a sizeable shot count, as we shall see.

And so we come to those fully adjustable stock elements- a key feature of most Field Target specified rifles these days. The aim is to set everything up so that the rifle supports the shooter, and allows a shot to be taken with minimal muscle strain; effectively getting the gun to fit the shooter. Inevitably, this takes time and effort, but don’t be in a hurry. Be methodical, assume a relaxed pose, and gradually move every component of the stock assemblies, until everything naturally falls into place, and feels right.

Looking first to the cheek piece, the top laminate section can be canted at an angle by slackening off the Allen bolts underneath, moving as desired, and then re-tightening. Height can be significantly altered by first slackening the socket screws at the base, then using the finger wheel to adjust. Again, tighten the bolts once the position is right.

Length of pull and the angle of the butt hook can be altered in much the same way- slackening the bolts at the base of the butt, and adjusting the finger wheel. But this comprehensive design also allows the butt hook to be adjusted for contact points in the shoulder, angle, and height throughout. The hook itself is articulated, whilst the red lever is a quick release catch, allowing for the rear assembly to be moved up or down in the middle of a tournament, so all bases appear to be covered.

The anatomical pistol grip is handspecific, and can be altered for angle too via the two recessed bolts, just behind the breech block, allowing forward, back and around its axis corrections. Look to the forend, and there’s also no half measures here either, with a fully adjustable, drop down Hamster assembly, which can be altered for angle as well as height. Again, a quick release lever allows for major transformation of the Tsar’s dimensions, mid-competition, dealing with a steep uphill or downhill shot for example; and the entire assembly can be moved along the accessory rail too, so we are talking plenty of options here!

OK; time to assess performance. Pull back that slick little side lever, and the breech is exposed. Roll a pellet into the loading tray, close the lever and you’re ready for action! The 2-stage trigger on test proved sensitive and crisp, and that, combined with a satisfyingly crisp muzzle report, generated by the muzzle brake, gives this model a superior air. That muzzle brake incidentally, is the 30/30 model, and looks the part but is also highly functional, with 30 small ports cut into the exterior tube. The Tsar is no lightweight, at 9lbs, 11oz, but with many shooters happy to take the advantage of weight, as it helps keep everything stable, the trend in FT circles is certainly towards the upper end these days, where heft is concerned!

A chronograph test was first on my agenda, as accuracy with this type of gun is clearly nothing without consistent power delivery. 148-shots later, and my readout had still only picked up a total spread of 12 fps, with most velocity figures within a couple of fps. Superb consistency then, even if velocities were a little too close to the limit and confirmation of the Ataman regulator’s integrity. Accuracy over 35 yards was a good bare minimum place to start, and here, the Tsar produced incredibly tight clusters, better than ¼” c-t-c, that would genuinely hold a pellet! Moving to 50 yards, I achieved a ½” spread, which given the highly irritating continuous breeze I had to contend with, I’m sure I could better. Great results regardless, however you analyse them.

Daystate already have several experienced FT shooters using a Tsar in top level tournaments, including Richard Beaugie and Stuart Hancock, so it will be interesting to see how the season develops. In the meantime, I can certainly endorse this rifle’s credentials where top flight performance is concerned. £1900 is of course a serious outlay in anyone’s book, but consider the sophisticated on-board features, and technical ability of this model and it comfortably earns a place on any shortlist. So I raise a glass to the Tsar, and its arrival onto the super competitive FT scene- a welcome return indeed for Daystate!