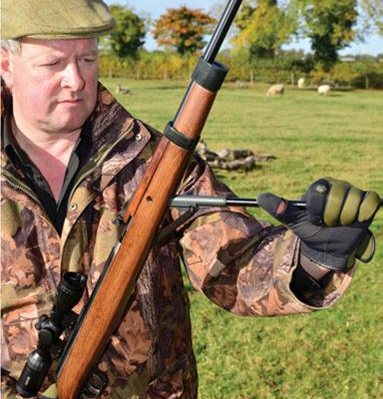 Shooting in general holds a wide appeal, but whilst many of us are undeniably obsessed with all things competition orientated, there’s an equally sizeable army of enthusiasts out there, that gain as much pleasure from the specialist militaria and collectables aspect of our sport. On test here is a rifle that my Editor (Pete Moore) was very keen to get my take on, as I’m more about accuracy and target-type shooting than I am about hunting. However, this reasonably new design brand will, doubtless firmly appeal to the latter group mentioned and is undoubtedly an intriguing and unusual offering in equal measure.

Marked up as a Mauser K98, this model is manufactured by Mayer & Grammelspacher, perhaps better known as the company behind the Diana brand. Based in Germany; and whilst it’s not quite a true reproduction, it closely follows the profile of the famous war time model bearing the same name. The K98 was adopted as the standard issue rifle of the German Army in 1935 and was an outgrowth of the original, full-length G98 used by Germany in World War 1. The K98 was apparently manufactured by a variety of companies, including Erma, Oberndorf, J.P Sauer, and Steyr, as well as Mauser. With over 14 million being produced by the end of World War II, it remains one of the most widely produced infantry rifles of all time; so, it’s definitely a classic to add to any collection. Post war 98 actions formed the basis of many European sporting rifles too and is still rated today, even in the face of modern competition.

The ‘K’ stands for Karabiner, or shortened rifle, yet at 44”, that seems something of a contradiction here! This Diana version is a bit of a departure from the original brief, given that the original cartridge version would have incorporated a full bolt action assembly. Yet it still manages to engender an authentic, not to mention quality feel, courtesy of some clever features, and Diana’s renowned reputation for solid engineering.

The first detail to grab the eye is that full length, hardwood stock and with the inclusion of the top section (upper handguard), originally designed to alleviate the heat of the barrel on the hands, and a super robust sling mounting clip around the forend, it certainly looks the part. That authentic look is further enhanced by the protruding under-lever under the muzzle; not entirely dissimilar, though a bit thicker from the visible barrel cleaning rod on the original.

Whilst the original carried all manner of variations through its long production run, the hooded bead fore-sight carried on in this Diana model certainly rings true for the most part. The sturdy rear sight, though not the authentic tangent type is none the less fully adjustable via finger wheels and in the right place. Equally with the profile of the trigger, guard and the entire grip and rear butt section, all identical when compared to the original, there’s plenty for collectors to salivate over. That includes that cut-out right through the wood at the rear to receive a sling. All very nice and authentic, but there is perhaps one area where a small modern touch of refinement could have been sanctioned; namely the butt! The totally smooth metal plate just wants to slide around the shoulder, and would benefit from a splash of rubber!

At 9.5lbs, it’s clear that this is an adults-only model, and part of that heft comes from the use of quality components. Indeed, an all-metal construction explains much of that weight, although this Mauser is a sizeable beast. I say all-metal, save for the trigger guard, which, given I had to tap it to confirm, looks so finely moulded, it easily passes on quality grounds. All the main metal surfaces, barrel, compression cylinder, and under-lever, are treated to expertly applied chemical bluing, and with the woodwork evenly sealed and equally well finished, the prevailing impression is of a high-grade tool.

Traditional spring power lies at the heart of this rifle, (despite some confusion in certain quarters concerning a possible gas-ram version) and this needs the under-lever to be pulled down from the muzzle, all the way back until the trigger engages. This should be done with the butt securely nestled in the groin. It does take effort, given that the under-lever is short, yet complete the task in one quick sweep, and momentum keeps things perfectly manageable. Safe procedure or ‘best practice’ if you will, dictates that that under-lever be gripped in the left hand at all times, whilst pushing a pellet flush into the lip of the barrel inside the sliding breech. Yes, there is an anti-bear trap device fitted, but years of shooting HW77s has conditioned me. Holding the lever is still recommended, rather than relying on small metal components!

One nice feature here is the machined-out bottom of the breech area, so any dropped pellet can just fall through and out of the bottom of the action and not get jammed- in much the same way as Air Arms configure their popular Pro Sport! Once a pellet is chambered, press and hold down the small safety tab to the right side of the breech that activates/de-activates the anti-bear trap system, and at the same time return the under-lever to a close.

Push forward the automatic safety catch at the rear of the cylinder, and the shot is ready. As an aside, the action can be de-cocked without firing, by holding the under-lever down with the left hand, pushing off the safety, then pressing the anti-bear trap catch down and at the same time gently letting the lever return, whilst controlling spring pressure.

So how does it?

Diana fit their renowned T06, 2-stage, fully adjustable trigger unit to this model, and for that you get a pleasantly shaped and wide trigger blade and a pleasingly sensitive mechanism- conducive to accurate shooting. Take up the first stage against minimal spring pressure, and gently squeeze off the shot. It feels great in use, and is a contributory factor to this models down range performance.

Firing the Mauser K98 revealed plenty of spring noise, and an action much in need of lubrication. That said, whilst it didn’t sound too impressive, felt recoil was very mild, helped I’ve no doubt, by the sheer mass of 9.5lbs! And so to performance figures. Chronograph readings, using a variety of ammo, was stunning- with a 10-shot string using RWS Superdomes, posting a 4 fps total spread, and Air Arms Diabolo Fields unbelievably even better at 3 fps total spread.

Thoughtfully, Diana includes a scope mount, to which I fitted an Optisan in medium height rings, it somehow looked the part, and more importantly allowed me to assess its true accuracy potential. The iron sights were good, but glass really proves a point! Over my 30 yard test range, and from the over-arm FT sitting position, I managed 5/8” centre-to-centre groups using both the Air Arms and Crosman Pointed pellets, and was left thinking that this gun had great potential, and would only improve with a lube up. As it stands, a cracking performance overall, from a satisfying airgun, bursting with character.

OK; admittedly this Mauser K98 is a bit of a beast, and the sheer heft of the thing, and the retro replica looks will not appeal to all. But if you like your airguns solidly built, and fancy a highly capable rifle with collectable credentials, this unusual Diana makes a strong case for itself.

Our thanks go to Steve Thompson at Thompsons Gunshop, near Peterborough, for the loan of this rifle for test.