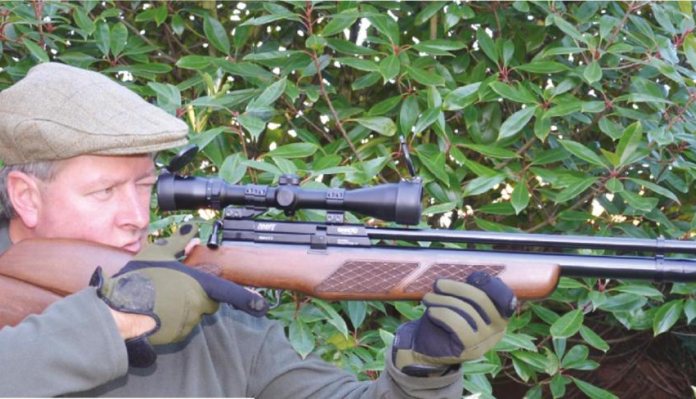 Right now, the airgun scene is an exciting place to be, and with the meteoric rise in the popularity of pre-charged pneumatic rifles (PCPs), showing no sign of abating, variety and technological innovation looks set to continue apace. Recoilless shooting is the key to this upsurge in sales, as it simply allows enthusiasts to shoot more accurately, with less effort. Where a spring gun needs heavy, cumbersome internals to generate power, PCPs are different animals altogether; and they’re so much more forgiving.

Unsurprisingly, as an inevitable shift in sales takes place, manufacturers have been forced to adapt and evolve, to ensure a piece of the action; and this month we highlight a certain Spanish name making just such a leap of faith.

So here it is; Gamo’s first proper entry into the world of PCPs and I have to say, it’s an interesting development. The Spanish manufacturer is of course well known for their extensive range of spring-powered fare, normally aimed at the budget sector. But now, the sheer popularity of PCPs has finally proved an irresistible lure.

A milestone of a rifle then for Gamo, but one look at the RRP at sub £400, confirms some aggressive marketing too. For the Coyote is a multi-shot, courtesy of a 10-shot rotary magazine, and when you take into account additional production costs associated with such a design, it’s a significant factor.

A highly competitive RRP then, but doesn’t the Coyote look vaguely familiar? Well yes it does, as with BSA part of the Gamo company portfolio, the success of their Scorpion and associated models hasn’t been lost on the Spanish manufacturer. Being able to work closely with BSA, has given Gamo an invaluable fast-track entry into the world of PCPs, by tapping into the research and technological know-how, learnt along the way.

The Coyote’s action has ‘Made in E.U.’ printed on the side, but with the barrel stamped ‘Hammer Forged’ and BSA one of the main exponents of the art, it’s a reasonable assumption that the British based company had significant input in the Coyote’s design and manufacture.

Of course, that rather attractive woodwork catches the eye, and this highly distinctive beech sporter design bucks the trend, and actually hails from Gamo’s own factory in Spain. With industry standard, laser-cut chequering adorning both the forend and pistol grip, styling and grip are well served.

Configuration is best described as fulsome, with the pistol grip and bulbous forend, surprisingly chunky. I reckon the Coyote stands out from the crowd, but those over-sized dimensions may divide opinion. Certainly a case of try before you by! Plenty of detail, and an attractive shade of lacquer, combine to great effect overall, although I’m not quite sure about those downward strokes on the butt, or Gamo’s persistent use of a hard rubber pad. Super hard-wearing maybe, but it defeats the object somewhat.

Looking back to the action, it’s interesting to note that probably in a bid to differentiate their model against that of BSA, Gamo have featured a ‘fig-8’ support bracket between the barrel and cylinder. I would probably remove it if this were my rifle, and let the tube truly float, as BSA do with their line-up- easily achieved by slackening the three grub screws on the bracket.

Quality-wise, collaboration with BSA is very noticeable and engineering and finish are well up to the mark, with a good standard of chemical bluing applied to the barrel and cylinder. The usual matt black finish applied to the raised breech block housing all looks the part, whilst that highly attractive bolt handle adds a touch of refinement.

Fitting a scope to the Coyote is a piece of cake, made all the easier with a continuous dovetail rail, running above the magazine housing. No problems such as the height of the magazine on this model! With glassware secured, the next task is charging the main cylinder to the prescribed 232bar. Gamo utilise the probe design of filling adaptor, and the inlet valve is concealed underneath a push-fit plastic collar.

Rapidly expanding air can be relatively noisy on any PCP but this model allows for a silencer to be screwed into place by simply unscrewing the small muzzle diffuser, (very neat incidentally) and spinning a moddy into place, over the ½” x 20 UNF thread.

Before the action can start, we need to fill the 10-shot, BSA-style magazine, the latest design of which is utilised here. Filling it is easy too. Just rotate the drum after dropping a pellet in- chamber by chamber. A shot indicator is all part of the design, and everything feels well machined and precise. The 177 gun (on test) has a blue internal drum, whilst .22 comes in red.

With the mag filled, pull the smooth bolt rearwards and push the magazine cassette in from the left. At this point, a small magnet is felt, which helps pull it into its slot, finally locating a small dimple into the housing.

Gamo have clearly tried to give the Coyote character and differentiate it from the opposition. A stylish trigger blade certainly helps, and their SAT2 (smooth action trigger) mechanism is all part of the deal. Yes, the blade is plastic, but it’s precisely moulded, and with a fairly smooth release and factory set-up overall, I found it, all-importantly, allowed me to extract half decent accuracy on test. Adjustment is possible, for those who wish to tinker, but the usual provisos in this area apply. In short, best not to tamper, if you’re unsure what you’re doing! For the record, a manual safety tab sits inside the front of the guard; maybe not the safest place for it, but it’s there if you need it!

Once in the shoulder, the Coyote feels good, with that well configured woodwork doing its job. Personal taste and physical stature will always dictate how a rifle feels of course, but for me, that fulsome forend is just right, with the ultra rounded tip particularly comfortable on aim. One point to note at this stage though, has to be that fairly long stretch to the trigger, given the raked grip. Again, it’s something that you’ll only really appreciate from direct handling.

Cycling the bolt handle back and forth indexes the next chamber of the magazine in turn, and in use, the system works well. However, as with several multi-shot PCPs on the market, it is possible to index the Coyote’s magazine to the next shot, without actually cocking the action, causing two pellets to be loaded at once. A positive approach to cocking and cycling the bolt handle should solve the problem, but it’s something to be aware of.

Accuracy wise, the quality of the barrel soon became apparent on test, as absurdly tight groups, measuring around a quarter inch c-t-c at 30 yards, were recorded. At 35 yards, the Air Arms Diabolo pellets used, still stayed within a 5p piece, which says it all.

Impressive stuff, and at the sub £400 price point, Gamo’s Coyote should ruffle a few feathers for sure. Of course, your air tank and charging gear is on top of that, but a solidly engineered action, great barrel, and nicely shaped stock, combined with a slickly presented 10-shot magazine system, gives the Spanish manufacturer a highly competitive PCP from the off.

To conclude, the Coyote is not just great value for money, but a very capable rifle, for general purpose, hunting, or even HFT.