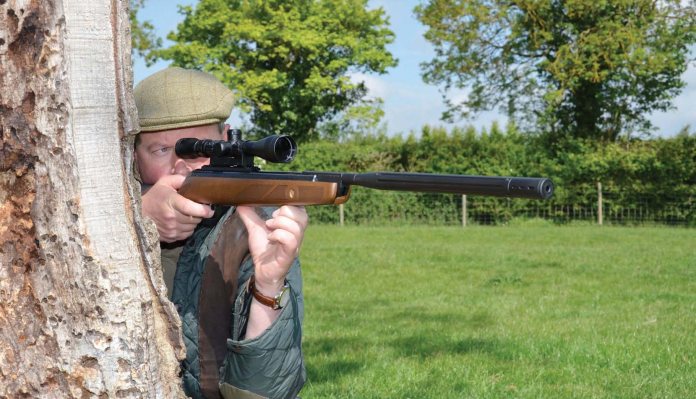 Just lately, the fullpower, spring-piston break barrel market has got rather crowded, and there’s now quite a list of contenders in the running, for between £150- £250. This is Gamo‘s bread and butter, and their range includes a plethora of options in this price sector. On test, here is the latest version of the Varmint Hunter Classic, fitted with a highly attractive beech stock, full-length barrel shroud, two stage trigger, and a 3-9x40 scope and mounts, all included in the asking price of around £200. Reasonable value on paper then, so let’s run through that specification in more detail.

Looks-wise, this model is a real case of traditional meets modern; given that very pleasant, if rather staid beech woodwork, mated with the jazzy barrel arrangement, but in terms of looks, I reckon it works. An attractive shade of lacquer is utilised, and being quite light, it means that plenty of natural grain pattern can show through.

As for the barrel, a thin rifled tube is actually bonded inside a synthetic breech block and shroud assembly, and the overall feel is quite slick. What appears to be small air diffusers along the shroud, are actually dummy holes, with no air release. That said, air suppression on a spring powered airgun is nowhere near as effective and dramatic (or necessary) as with a PCP, and in the case of the Varmint Hunter Classic, there is at least a small expansion chamber near the muzzle.

Largely cosmetic then, but with a super-efficient breech lock-up in place, and a sturdy feel overall, this area is still a big plus point for the Gamo. Fitting the 3-9x40 scope and mounts supplied is a simple affair, and with the ‘belts and braces’approach from Gamo, any prospective owner of this model is assured peace of mind. There’s a pre-drilled hole in the rail to receive an arrestor stud, and a stud itself, fixed to the rear of the tracks, so scope creep shouldn’t be an issue. With the scope all set up and ready to go, and a selection of suitable ammo, I was all ready and eager to see what this rifle could do.

Cocking the action is a civilised affair, since the barrel breaks open with no effort whatsoever, and the stroke itself is fairly smooth, save for some ‘graunch’ from the spring. Like many designs though, it pays to complete the operation in one deliberate movement. Bringing the barrel down and back soon reveals the long piston stroke, but with that significant plastic-clad barrel assembly for leverage, no undue effort is necessary. The breech is quite a flush fit, with no countersunk lead-in, so pushing home pellets flush with the lip of the barrel is important, to avoid damage on closure.

Now to that all-important feel. Pick this gun up, and the combination of fine balance, and that sleek timber really pays off. The forend tip is perfectly tapered and nicely rounded in the leading hand, whilst that chequered grip and well-shaped trigger blade, all seem to fall into place naturally.

When I first started shooting this particular rifle, the action was ‘dieseling’ quite violently, and for those unfamiliar with the term, this refers to when the internal oils used for lubrication, actually ignite inside the compression chamber. Each shot is then accompanied by a real crack, and it can be a little disconcerting. Breaking the barrel open for the next shot often releases a plume of smoke that has that tell-tail smell, and if it carries on for an extensive period, it can damage the internals. It’s a common problem in budget springers, but it affects any model when excess oil is present inside the main chamber. In the case of this Varmint Hunter, about 10-15 shots later, saw the excess lubricant pretty well burn off; and with the action rather more settled, my testing proper could continue.

Using Daystate Rangemaster Li pellets, a 10 shot string returned a total spread of 26fps, and power right up to the limit. A little too near for comfort, but again, once any spring powered action has had more time to settle after a bedding in period, (certainly when dieseling) I would expect the velocity to fall slightly, and consistency to improve into the bargain.

The ‘Bull Whisper’ shroud, as Gamo call it, features baffles around the muzzle, but action noise renders it fairly irrelevant to be honest. As an aid to cocking the action of course, it works well.

The internals of this rifle are typical Gamo however, and that means just a little harsh in my book. It’s a shame, as the company really does have some nice handling models out there at the moment, that could be so much nicer to shoot, with more attention paid to some simple recoil dampening measures around the powerplant.

Setting the power levels that bit lower would help too, since we don’t need to be pushing the limit all the time, and whilst simplistic, less power usually means less recoil.

Over my 30-yard test range, this rifle felt incredibly quick, and once those pyrotechnics had died down at the outset, the action was allowed to shine. ¾-inch groups c-t-c is very creditable, and I achieved this from the Daystate ammo and BSA’s new Red Star dome heads. Admittedly I had to work through the small amount of creep in the trigger, but the final release was acceptable, and about par for the course on this grade of gun.

In short, I enjoyed shooting this rifle, despite an overly lively action all round. The sheer handling and that silky cocking stroke, are big plus points, that will win many fans. If Gamo could just tweak that firing cycle, this model would have so much more going for it. As it stands, it’s still a smart performer, either as a starter pack, or a full power hunting tool.