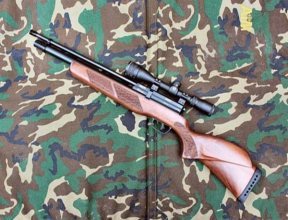 Once in a while even companies who shouldn’t be underestimated surprise us with something special – be that a new scope, accessory or, in this case, an air rifle. I say this as, just when you think you can pigeon-hole Gamo as a company set on flooding the market with as many new ABS stock springers and gas-ram powered air rifles as possible, without pomp or circumstance, they’ve launched the Coyote multi-shot pre-charges pneumatics – their first ever PCP — and its now hit gun racks nationwide.

The Coyote boldly claims ‘Made in the E.U.’ and although I’d heard the rifle was in production, it was only on a recent visit to my local gunshop that the distinctive stock first caught my eye. Initial thoughts that it was a BSA (for reasons soon to be detailed) were quickly thrown out of the window upon seeing the Spanish airgun manufacturing giant’s brand name boldly emblazoned in white on the relatively high action block. With that said, here’s what the somewhat understated yet very appealing Gamo Coyote has to offer.

Anyone familiar with Gamo rifles will remember before the company concentrated on ABS stocks their furniture was steadily increasing in both quality and design. In that respect the nicely grained beech’s practical yet understated stylish qualities are relatively familiar. The ambidextrous woodwork features a uniquely configured and well defined cheekpiece with a pronounced hogs back shape.

The lower part of the cheekpiece is finished with a distinct angular edge that runs back from the lower rear section of the pistol grip to the point where it almost meets the ventilated thick black rubber buttpad. In contrast, the relatively slim, slab-sided forend is well proportioned in relation to the action and retains a good degree of depth right up to the neatly rounded off end tip. Deep-cut skip-line checkering is in generous supply seen as two large panels set either side of the forend while a large contoured panel is found on either side of the pistol grip.

The rich, brown-stained wood has a sensible amount of what can best be described as a semi-satin lacquer finish. It’s practical and stylish features that stamp Gamo’s mark on what many will first wrongly presume to be a BSA under a different brand name. However, as I detail the Coyote’s other main features you’ll begin to realise this is a rifle with a character all of its own and comparisons with any current BSA PCP can be dispelled.

One main area of difference is the configuration of the air reservoir in respect of filling and keeping track of the fill state. As all reviewers tend to get a tad complacent with certain types of PCP, we expect certain features to be positioned or accessed in the usual way and/ or in common areas. By this I refer to the fill point and air gauge. Granted, the Coyote is filled via a quick fill probe not dissimilar to that used by many BSA PCPs. But I must admit when I first looked for the inlet valve port by turning what initially appears to be a black plastic rotating ‘collar’ at the front of the reservoir, nothing appeared!

Casting my assumptions aside, a quick full read through of the manual had me discover this rotating collar is actually a pull off friction fit sleeve. Once slipped forward it then reveals the brass assembly at the front of the steel reservoir which of course is also where the inlet hole for the fill valve is positioned. I filled to the recommended 232 bar which according to the tech specifications gives 100 shots in .22 as per rifle on test and 70 in the smaller .177 calibre. After several ‘fills’ I found the figure for the .22 test rifle showed closer to 120 full power shots before any noticeable drop off occurred. I might have had some initial problem finding the fill point but there’s no missing the air gauge as this well sized manometer is positioned on the very front of the air reservoir itself.

At risk of contradicting myself, it’s difficult not to make comparisons to certain BSA- manufactured air rifles. Due no doubt to the Coyote’s bolt action running the tried and tested 10 shot removable self-actuating magazine that the company have continually developed and modified since the original unit was made. Although the bolt action does run a very similar self-actuating removable magazine, unlike the ‘original’ it’s obviously based on it doesn’t use a retaining catch to hold it in the housing, instead there’s a magnet! Also, on closer inspecting the sides of the well, you can clearly see two slightly protruding metal side plates that help guide and hold the magazine securely in the left of the action block.

To reassure readers on this new format, I had the cocking bolt in the fully rearward position so the probe was out of any magazine chamber. After much twisting and rocking I can attest to the security of the system so you need have no worries of a magazine shifting position once located in its housing.

The cocking bolt has a finger- friendly, flat-ended teardrop ended handle which feels good in the hold and operates positively. Draw it back to cock the rifle and push forward to probe a pellet out of one of the 10 chambers of the modified magazine. A feature of obvious design difference but one that bears familiarities to those seen on certain models of other Gamo rifles is the SAT2 trigger mechanism. This 2-stage adjustable unit features an in-guard manual safety blade set forward of the rather ‘nifty’ looking trigger blade. While the blade does its duty by giving a comfortable finger feel the rather blocky style of the ABS trigger guard is equally practical and functional; in keeping with the rifle itself.

The 18.5 inch hammer- forged barrel has a 1⁄2 inch UNF screw cut muzzle is protected by a stylish ported cover cap. Once removed I fitted a BSA ‘VC’ Silencer, which did a superb job of taming muzzle report, but lengthened this 37.5 inch carbine-sized PCP to 44.25 inches; saying that, the extra length added by the ‘VC’ didn’t have any undue effect on the rifles inherent handling and balance.

A feature that’s sensibly been taken on-board from BSA is the lengthy run of uninterrupted scope rail atop the action block. I’m sure I’m not alone when I say this is one of the best bases A feature that’s sensibly been for fitting any size of optic or a dedicated NV unit. After scoping up with a Hawke Airmax EV 4-12x40AO in medium mounts and setting a 30 yard zero the rifle soon proved its worth by producing sub 1⁄2 inch groups using quality ammo. In the field this will translate to clinical kills and without doubt, as with other quality PCP’s, the Coyote is capable of outshooting anybody.

Although the Gamo Coyote can be tagged as an air rifle that follows a tried and tested format, there’s little doubt or discussion needed to realise it’s a milestone release for the company. Sensibly scoped up and with a suitable silencer up- front this is a fast handling, well balanced, lightweight, highly accurate and nicely configured multi-shot PCP. Considering the unbelievably reasonable price tag you really can’t ignore the fact that you’re getting a hell of a lot of gun for your dosh.