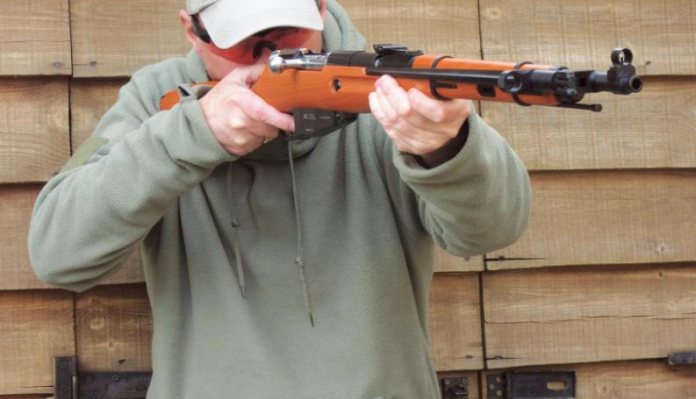 When I speak to friends who are aficionados of the bolt-action service rifle, it’s invariably the .303 Short Magazine Lee Enfield that comes top of the list, closely followed by the Karabiner 98; there is another military rifle though that also figures in that grouping and that’s the Russian Mosin Nagant.

First issued to the Imperial Russian Army in 1891, the Mosin Nagant variants, initially a combination of designs by Russian Captain Sergi Ivanovich Mosin and Belgian native Leon Nagant, were used by the armed forces of the Russian Empire, the Soviet Union and various other nations. It is one of the most mass-produced military bolt-action rifles in history, with nearly 40 million having been made since its introduction, and, despite its age, it has been used in various conflicts around the world, being cheap, rugged, simple to use, and effective in operation.

The 1891 Mosin Nagant was the first Russian rifle to incorporate the principles of a high velocity magazine fed system, and replaced the obsolete, single-shot Berdan in the hands of Russian soldiers. Upon its introduction, the rifle was known as the “Three Line Rifle, Model 1891.” This name was derived from the calibre, which was expressed in a now-obsolete Russian unit of measurement, the ‘liniya’ or ‘line’; a single ‘liniya’ equated to .10 inch/2.54mm, thus three ‘liniyas’ equalled .30-inch/7.62mm. After the 1917 Revolution and the adoption of the metric system by the Soviets, the rifles were all simply classed as 7.62mm.

In appearance, the original 1891 Mosin Nagant rifles were every much of their time; with full length wood furniture running to within a few inches of the muzzle, the rifles were a straightforward turn bolt design. A five-shot, bolt-action, internal magazine fed rifle, with a box magazine that could be loaded via a stripper clip, the action was simple and strong. The two-piece bolt (the entire bolt mechanism only had seven parts) was composed of a rotating dual-lug head and body. Like the German Mauser, the bolt arc on the Mosin Nagant was 90-degrees, as opposed to 60-degrees on the Lee Enfield.

The 1891 rifle could be fitted with a socket bayonet, which added even more to the already impressive length of 51.25-inches/1304mm. As per their doctrine, the socket bayonet was highly valued by the Russians, although it had fallen out of favour elsewhere, and was intended to be a permanent fixture on the rifle; alterations were actually made to the sights of the Mosin Nagant to allow for the effect of the bayonet on the barrel harmonics! The bayonet ended in a screwdriver point, which helped with field-stripping. The rear ladder-style sight was originally graduated in ‘arshins’, a Russian measurement equal to one pace or 28-inches, but once again in later variants of the rifle, the measurements were changed to metres.

Initially, Mosin Nagants were made at three arsenals in Russia, as well as by Chatelleraut in France. The Russo-Japanese War saw the Mosin Nagant rifle’s first major deployment and by the time the hostilities broke out in 1904, some 3.8 million rifles had been manufactured, with over a million and a half in the hands of the Russian cavalry and all of the reserves. However, few M-1891s saw combat in the conflict; there were still not enough 1891s to equip the entire Russian Army and most units in the Far East were still armed with Berdan rifles.

Somewhat bizarrely, contracts were given to Remington and Westinghouse in the then-neutral United States, but once again the 1917 Revolution put paid to these being shipped back to Russia, and ended up being used in the U.S. for training, some did end up being given to White Russian troops, and a number were also carried by American soldiers during the Siberian Expedition of 1920; designated the ‘U.S. Rifle, 7.62mm, Model of 1916’, these are among the rarest of American service arms!

After numerous modifications to the original rifle, in 1938 a carbine version of the Mosin Nagant, the M38, was issued. The carbine used the same cartridge and action as other Mosins, but the barrel was shortened by 8.5 inches/216mm to bring the weapon down to an overall length of 40-inches/1016mm, with the forearm shortened in proportion. An increase in urban combat led directly to the development of the Model M44 Mosin Nagant. In essence, the M44 is an M38 with a slightly modified forearm and with a permanently mounted cruciform bayonet that folds to the right when it is not needed. In terms of handiness, the M44 was an improvement on earlier variants, particularly for urban warfare, but few M44s saw combat on the Eastern Front.

Following WWII, the Soviet Union ceased production of all Mosin Nagants and withdrew them from service in favour of the SKS carbine and eventually the AK series rifles. Despite increasing obsolescence, Mosin Nagant rifles and carbines saw service on many fronts of the Cold War, from Korea and Vietnam to Afghanistan and all along the Iron Curtain in Europe. Even after the collapse of the Soviet Union, Mosin Nagants are still commonly seen around the world; they have even been used by insurgent forces in the Iraq War and the War in Afghanistan, which makes the Mosin Nagant one of the longest continuously serving rifles in history!

I’ve been using a Gletcher Air Pistol for some time now; it’s a nice little replica of the Makarov PM and shoots very nicely indeed, so I’m no stranger to the quality and performance offered by this American brand. For those of you that may not have come across them before, SMG Inc. is an American company established in 2008. They specialise in the production of ‘pneumatic’ guns under their ‘Gletcher’ brand, as well as tactical and outdoor knives under the brand ‘Steel Will Knives’. They pride themselves in making products with the highest level of performance, quality, and craftsmanship. Their tag-line, ‘Military Precision’, emphasises the high level of function and design in their air guns. In the United States, Gletcher replica air guns are used by owners of real firearms to maintain their shooting skills, whilst in Europe, Gletcher air guns provide enthusiasts with the rare opportunity to capture the spirit of owning legendary firearms.

I was very interested therefore to see a replica Mosin Nagant M44 pop up onto the website of www.sportsguns. co.uk; it’s the first time that I’d seen anything other than handguns from Gletcher, and given the fact that their first ‘long gun’ was the iconic Russian rifle, I was soon in touch with Sports Guns to find out if there might be the possibility of obtaining one for review. The guys at the shop were extremely friendly and pleasant to deal with, and in a matter of days a large shipping box turned up safely on my doorstep.

My first though was one of “wow, that’s pretty heavy”, and sure enough, once I opened things up, a full metal rifle with faux-wood furniture was revealed in all its glory. This is a true heavyweight in the Gletcher line-up, tipping the scales at 8.21lbs/3.71kg. You can immediately appreciate the solid feel of the Gletcher M44, considering the barrel, bolt mechanism, magazine, and bayonet are all made of metal; did I say bayonet? Yes, I most certainly did! One of the key features of the M44 was the fixed cruciform bayonet that folds neatly to the right-hand side of the rifle when not in use, and the Gletcher replicates even this; hopefully this is not something that you’re ever going to need, and it’s easily removable, but if you’re buying the rifle more as a collector’s piece, then it’s a super touch!

Overall, it’s a very attractive rifle, with all metal parts other than the bolt finished in a deep, crisp black; the bolt itself looks almost ‘stainless steel’ in its finished form, and stands out beautifully against the rest of the metalwork, and I’d go as far as saying that this replica bolt is probably better finished than the real thing! I was a little disappointed to see the faux wood (read ‘plastic’) furniture, but this is actually quite nicely textured and doesn’t look too fake; I think that if I owned the Gletcher myself I’d probably scour the internet for some real woodwork, and just a quick search will reveal that it is quite easily and cheaply available.

Sights on the rifle are as you might expect, relatively rudimentary; a sliding leaf (not too unlike that of the AK series) at the rear and a protected post at the sharp end, the sights are adjustable for elevation only. The M44 also comes with a sling of webbing and leather construction, which again is a nice touch and this is easily fitted to metal threadthrough channels fore and aft.

The metal magazine is a very neat design, and by pressing the release catch just forward of the trigger guard the internal mechanism slides neatly out; there’s a sliding follower that locks down, so that you can easily load up to twenty-one 4.5mm/.177 Calibre BBs. The internal mechanism also holds a 12g CO2 capsule, so both ammunition and power source are in the same place; a super feature of the mechanism is that it also holds its own hex key to secure the bulb, so you don’t need to carry one around in your pocket to change the gas out.

With everything ready to roll, it was time to pop the Gletcher into the gun bag and head off to the woods where I have permission to shoot. With the bolt safety engaged, it was then just a simple operation to pop the mech back into the magazine shell, pop of the safety and have at it. It’s simple to shoot, pull back the bolt, shoot again, and once again pull back the bolt. The ammunition for subsequent shots is actually fed into the firing chamber by opening the rifle’s bolt, just as you would expect; the bolt itself is super smooth from the get go, and the trigger is crisp with very little take-up.

I tested the M44 using .40g Premium Grade Steel BBs, and running the rifle through the chrono gave me a mean of 3.69-Joule/447fps/2.71ft/lbs, which is perfectly acceptable. In terms of accuracy the Gletcher is excellent too, as I was easily able to hit sideplate sized steels at 40-metres prone. Dropping to 20-metre bench-rested, I was able to achieve some very nice 20mm groupings consistently, so as a ‘plinker’, this is right up there!

In summary, I have to say that I’m every bit impressed with the Mosin Nagant rifle as I have been with the Gletcher Makarov pistol, and with an 18-month warranty, the asking price of £299.99 doesn’t seem too bad at all; if you’re a fan of classic bolt-action rifles then I definitely believe that you’ll be wanting to give the Gletcher M44 Mosin Nagant a very close look indeed!

My thanks go to http:// sportsguns.co.uk for the loan of the test rifle; for more on the extensive Gletcher range, and much, much more do visit their website, and if you have a specific enquiry please give them a call on 01239 615 996.