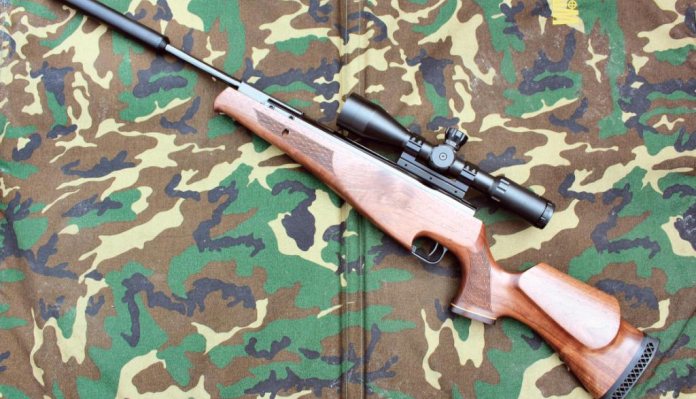 When Impact Airguns (IA) was initially formed they made no secret that they intended to carry on where Theoben (RIP) left off – even working out of the same factory unit based in Cambridgeshire previously used by that once greatly respected of British airgun manufacturers. Or as the fledgling company proudly proclaim about themselves: “A new name but with a 30 year heritage!” Understandably many supposed the legendary Rapid 7 would be resurrected – albeit in an upgraded format.

As we now know that wasn’t the case, as the first air rifles to roll out of the Impact factory such as the GSX 100 and GSX 600 multi-shot PCPs used the barrel over air reservoir or ‘piggy back’ design as it’s sometimes referred to. However there is one buddy-bottle fed rifle – the GSX 200 – reason being this model is primarily aimed at the FAC market due to a buddybottle having the capability to hold more compressed air. Even so, the actions of these rifles do have some familiar features of the Rapid but with internal upgrades and, as is the way with any progressive company, ‘IA’ are continually adding more models of top quality PCP’s to their roster.

As Theoben were once famous for their gas-ram powered air rifles I’m sure many agree it would only be a matter of time before we’d see a rifle that used said power plant. Well there is, but not just one, as there are two – these being the break-barrel action RM 100 (here on test) and the under-lever action RM 200.

Sorry for what might seem like a long winded introduction to this review, but we’re now in a time when it seems virtually every gun manufacturer has gas-ram powered air rifles on their roster. All are given ‘special’ denotations and/or terms used for the unit, but in essence all the systems are based on the time-tested ‘gas strut’ that Theoben developed to a point that it was to many (airgun hunters in particular) an appealing alternative to a spring-powered airgun. Without wanting to get too side-tracked on this – a gas-ram powered air rifle generally has a faster lock time, doesn’t lose power due to a weakening spring (so can be left cocked for long periods of time). Theoretically a high level of shot-to-shot consistency is maintained. This once patented power plant obviously at the time had no rivals, but when that patent ran out – it was ‘open season’ which is the reason why so many airgun manufacturers developed their own ‘gassers’. So, at last, I can now go about assessing how the RM 100 stacks up against the competition.

The stock is manufactured in the UK from top-grade American walnut and features a well-defined and quite high right-hand roll over cheekpiece with a ventilated thick black rubber buttpad – there’s also a dedicated left-hand version available. The steep drop down pistol grip has a noticeable palm swell and has been given a stylish dark wood end cap with maple spacer, while the relatively slim neck has a generous thumb channel to allow for a thumb up or over hold. The slab-sided forend is initially quite deep before tapering upwards and slightly curving inwards to end in a stylish Schnabel tip. Skip-line checkering has been crafted into the furniture applied as panels at the grip and along the forend.

Here I must mention, although the RM 100 has an overall length of 44 inches at 8.1lbs un-scoped, it’s much lighter than I first supposed. Also, despite it being a relatively lengthy sporter, it feels far shorter and handles far better than its perceived proportions might have you first presume. I think the reason for this is, although the metalwork (which has a very high lustre black gloss finish) including barrel, breech block and air cylinder are quite long, the long silencer that sits imposingly up-front is manufactured entirely from aluminium, thus reducing forward weight, which allows the rifle to maintain a good degree of inherent balance.

Sitting up front of the rifle’s 14 inch Lothar Walther tube is the very aptly named Long Series silencer – I say this due to it measuring 9 7/8 inches in length. The performance of this ‘long can’ I’ll detail shortly, but I mention it in relation to the cocking operation as it gives you a lot of leverage for which to unlock the détente and pull the barrel down through its relatively short cocking stroke, which is ultra-quiet and super smooth.

So cocking the rifle isn’t in the least strenuous, nor is unlocking the barrel from the closed position. I particularly mention the latter because, on inspection of the breech, it’s clear to see that during manufacture the engineers at ‘IA’ must work to very tight tolerances. Coupled with the big steel wedge shape détente lock, you’d initially presume you’d need to tap the back of the barrel to disengage its hold but, as mentioned, the lengthy lever allows you to simply ‘click’ it open and when fully cocked you then experience the quality of the engineering of the action again as it locks back with a reassuringly and very solid feel.

Also, once cocked, the trigger safety blade (positioned within the trigger guard) automatically engages visibly moving back from the off position. Interestingly, when the blade is pushed forward to disengage, it sits very neatly flush to the stock. Once a pellet is loaded into the breech, when returning the barrel to its original position, yet again the quality of manufacture shows itself as it’s at this point you do have to put a tad more effort into closing the breech than on most other break-barrel action air rifles.

For those familiar with mechanical action Theobens, this shouldn’t come as a surprise because when ‘IA’ took on the premises they not only inherited the machinery but also wisely reemployed most of the engineers who had previously worked there.

After securing a Falcon Optics 7 X 50 Menace scope onto the deepcut scope rails via a Sportsmatch Dampa-Mount for added security against the trademark ‘snappy’ recoil common to many gas-ram powered air rifles, I set a 25yard zero for the .22 calibre test rifle.

The 2-stage adjustable trigger unit and auto-safety is a very familiar design, almost identical to the layout last seen on the Theoben Evolution, but has obviously been upgraded as it operates very precisely. Also, the safety blade, even when engaged, sits quite far in front of the trigger blade itself, so won’t in the slightest be of any hindrance. I used Air Arms’ Field Diablo during testing which certainly agreed with the rifle, soon achieving ragged ½ inch groups at my set zero. The silencer reduced muzzle report admirably – the only sound heard on discharge being what I’ve often termed in past reviews of gasram powered air rifles as a dull ‘thock.’ The rifle’s firing cycle was very smooth and manageable too with low felt recoil.

The RM 100 is a stylish and superbly engineered air rifle and clearly shows that Impact Airguns have retained the very high quality of manufacture that was once a trademark of the company that they have effectively now replaced. Obviously you can’t ignore the fact it comes with quite a hefty price tag, but I’m sure many ‘devotees’ of the original HE Gas-Ram system and the rifle’s other very appealing qualities will understand why. It sports a very well-crafted stylish stock, is very accurate, has a very low muzzle report and despite its lengthy proportions handles wonderfully well.

Also, without wanting to upset the opposition, in my opinion the HE Gas-Ram power plant it uses is better than many newbies on the scene, as the firing cycle is by far one of the smoothest of its kind. My only criticism is personal preference, that being I’d have liked the rifle to be shorter, as I’m sure accuracy or handling wouldn’t be compromised by the barrel being chopped and/or a shorter moderator fitted on the 12ft/ lb model. I mention the power level as an FAC rated version of this exact same rifle known as the RM 100X is also available.