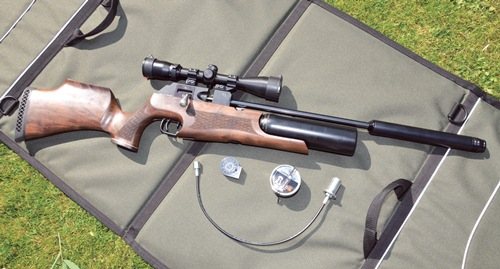 Interest in airguns worldwide has increased dramatically in recent years, helped in no small part by the rise of the internet. One thing that has become abundantly clear is the growing number of enthusiasts willing to pay for specialist equipment and an increasing number of premium products are finding their way into the market place.

One such manufacturer eager to satisfy this demand is Impact Airguns, a relatively new name on the scene, yet as the company now operating from what was the old Theoben factory they certainly have a head start in terms of product development. In fact, it’s fair to say Impact has certainly hit the ground running, as a succession of eye-catching models have been released all based on those highly distinctive, over engineered components so loved by an army of enthusiasts.

Subtle improvement and refinement are the names of the game though, and the company can hardly be accused of resting on laurels earned from past operations.

On test here is one of their new breed of PCPs, and I can tell you now, it really is something quite special. The Revolution GSX200 is a multishot, magazine-fed, bolt action air rifle that utilises the buddy bottle configuration. It comes with a very high-specification, and is primarily aimed at the serious hunting fraternity.

That glorious American Walnut woodwork inevitably grabs the eye, and with some clever design work and skillful execution, the end result is a handle that anyone can be proud of. Custom Stock, based in Sheffield, was commissioned to produce this Sporter design, and the mouth-watering grain pattern exhibited on my test gun, really adds to the up-market feel.

Laser-cut checkering has come of age, and the detailed designs adorning both forend and grip are a joy to behold, offering as they do genuine purchase as well as being easy on the eye. My test gun came in a ‘right-hand dedicated’ specification, complete with welldefined, roll over cheekpiece, that super-sleek, thinned down pistol grip, and back thumb shelf. The Rosewood capping and white line spacer are pure decoration of course, but superbly well done nonetheless, as is the finishing where that super soft rubber butt pad mates with the stock. A deep forend aids standing shots, whilst the new trigger guard just looks better than any wooden overhang.

When I caught up with Impact at last year’s British Shooting Show they were just in the process of exhibiting a series of Tactical rifles, and whilst these have undoubted appeal, especially among their intended sector of the market, the ultra matt finish and utilitarian specification had me wondering about the company’s direction.

I needn’t have worried, for this GSX200, whilst sporting a deliberately matt breech block, comes with a superbly blued barrel and fittings. Bold design, and socket headed bolts throughout, combine to great affect, and with an extremely high level of engineering on display, I could feel a real affinity building up with this gun.

An ultra large silencer comes fitted as standard to this model, and with the barrel now slightly trimmed to 14.5-inches, balance is restored. The silencer comes screw cut too, which is a nice touch, so removal for barrel cleaning is a simple and quick operation. With no brackets or restrictions in place, the beefy barrel is literally free floating, which is the ideal configuration in my book. Start clamping a PCP’s barrel and the pressure changes throughout the rifle’s charge can sometimes lead to curious zero shifts, as components stretch and warp under pressure. No such issue here, and the GSX200 is all the better for it. For the record, the barrel is also treated to a fully machined crown, sporting a 5-degree rebate, and for that read a professional finish, expertly applied.

Fitting a scope to this model is child’s play too, given that ultra deep dovetail rail, machined into the top edge of the sturdy, one-piece breech block. Getting air into this gun is also a far easier task than that crude procedure associated with buddy bottle fed guns of old. No more part unscrewing the bottle and firing off all the excess air trapped in the valving! Quick fill design now means the bottle is charged in situ. The screw cap plug in the underside of the stock just needs to be removed from the inlet valve, then the filling adaptor supplied, can be pushed into place, and the action charged to 200 bar. At this point, I do have to criticise that slightly clumsy ‘top hat’ attachment however.

The fitting is there to allow the user to pull back the spring loaded adaptor rim in order for it to lock onto the valve, but in use it’s too tight a fit, and it’s a little disconcerting not knowing whether it is securely in place or not. Alleviate the valve area and allow for the Foster coupling to be directly applied, and the top hat would be redundant.

A neat pressure gauge (manometer) is stowed just forward of the breech, so residual air pressure can easily be checked; but with a 400cc buddy bottle on-board, fully regulated action, and an approximate potential shot count of 380 in .22 calibre, there’s no initial cause for alarm in this regard.

As a multi-shot, the Revolution GSX200 comes with a 12 shot magazine in .22 calibre (17 shot in .177), and it will be familiar to any users of the original Theoben design. Twist the lid of the cassette anti-clockwise, push home the first pellet head first, whilst preventing it from dropping out, then chamber each pellet thereafter until the cassette is full. Push home the mag into the hole in the action from the left side, and push home and lock down the bolt. The first shot is now ready. Cycling the bolt back and forward will then cycle each shot in turn.

Having spoken to Darren Godfrey at the factory, it came to light that all production rifles are now having the trigger fine-tuned and set-up, and having shot my test gun, I can only vouch for the care taken with assembly. The broad, well-shaped blade is a good start.

Add to that a super sensitive, ultra refined mechanism, and it’s hard to see anyone being less than satisfied with this set-up.

I shot the GSX200 with the magazine in place initially, and over the chronograph, a shameful waste of 250 JSB Air Arms Diabolos returned a total spread of 25fps, which is pretty impressive overall. Most shots were within just a few fps of the average, yet fairness dictates that all figures be included. All shots were pellets straight from the tin.

A gun of this quality, not to mention price, demands accuracy tests at greater distances, and over my 40 yard range, sub half-inch groups were easy to come by, with several brands of pellets. With the action block now relieved at the breech, it is actually possible to shoot the GSX as a single shot, and when I did this my best results included a stunning quarter inch group c-t-c. Whether it was psychological, I couldn’t say, but impressive nonetheless. Either way, do your part and this gun will more than do its part.

‘No-nonsense’ is an over-used term these days, but the slick, straight forward design of this rifle really does warrant such a description. Pull back that chunky, stainless steel bolt handle to the rear of its travel, cycling the action, then push it forwards and home again, and you’ll soon appreciate the sturdy, reliable cocking action, and unique feel.

Charging via the top hat attachment is irritating, but get over that (I reckon Impact will sort this soon enough in any case) and we are surely left with one of the best hunting rifles of its type on the market.