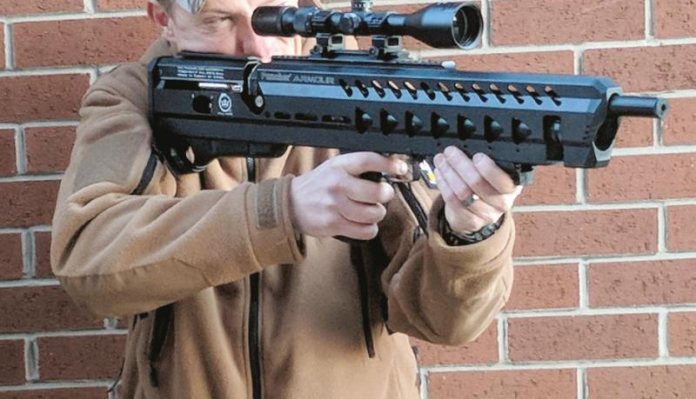 With Bullpup air rifles being all the rage for the last few years, it seems that every manufacturer is getting on the band wagon. Kral Arms of Turkey already offer their Puncher Breaker PCP, which shows a skeletonised build, but newer is the more minimalistic looking Puncher Armour PCP, multi- shot Bullpup and it looks kinda ‘different’ I think you will agree? It’s hard not to see that the build reminded me of the earlier Evanix Rainstorm in many ways. Or to put it into perspective the 10mm Pulse Rifle used by the Space Marines in the Film Aliens II. But this blocky, technical layout seems to be all the rage these days and it’s a definite case of a Maramite gun, as those sci-fi looks are going to turn as many people off as they will on!

The overall length of this sub 12 ft/lbs rifle is 31.1” with a 20.8” barrel, say what you like but that butt-less build does offer some advantages in handling. The air tube capacity is 280 cc and it can be filled to 200 bar. It is not regulated, so your shots will start to drop as the air runs low, but what do you expect for under £500?

Going from the back end then, the butt pad is pleasing to the eye with its chevron pattern grip on a soft rubber and it does feel good in the shoulder. The cheek piece is minimalistic but it’s adjustable for height via a thumb screw. But, it’s not ambidextrous, bugger! But I will press on for you righties! Seriously though, anyone that produces a Bullpup or for that matter any sort of airguns at all in this day and age really should make them easily adjustable for us southpaws! I do like to rant about that, as it annoys the Editor! (stop whinging, lefty!)

At the lower rear of the stock on the right side is a neat little storage area for a spare magazine, which is handy, especially if you are out in the field. Just above is where the manual safety catch is located. It’s recessed into the stock, which I think is a good idea, as it cannot be operated inadvertently. It is positive in operation and feels good and its action is firm but smooth. It’s marked S (safe) and F (fire) and pushes forward to FIRE and reverses for SAFE. There are some multi-shot PCPs that have an auto safety, so every time you cycle the action it goes to SAFE, which can be annoying! So, hats off to Kral for keeping it simple and sensible!

Moving along the rest of the stock, or chassis, which is actually more like an aluminium outer body shell that the gun sits in, a bit like the British Army L85 Bullpup assault rifle in looks in fact. It does feel sturdy though and is available in several colours including OD (olive drab), blue, black and a rather eye-catching orange… hmm!

Upon opening the box to initially check the rifle, me and the guys at the gun shop noticed that the pistol grip had snapped off! Possibly in transit, probably at the factory! Held by a single screw my guess is it was not tightened properly, so making it more prone to damage. But I got a replacement rifle and unsurprisingly it’s an AR15-style handle with finger grooves and made of a polymer. I decided to give it the acid test and holding the new rifle by the grip alone I swung it around at all different angles and it stayed on and tight. So I guess this was what my Editor calls a Monday morning or Friday afternoon gun, in that it somehow slipped past quality control; it happens!

Again, like the Rainstorm, the Armour comes pre-fitted with what looks like a Magpul AFG (Angled Fore Grip), probably a copy. This acts as a forward hold and also as a hand stop and in use feels pretty good. But if that’s not your thing, then there’s a vertical grip supplied, which is also a bipod too, it just fits on the Picatinny rail under the forend. At the front of the body shell is a cut out where the charging area is. This is the only part of the cylinder that is exposed, as the rest of it is housed within. The pressure gauge is right at the front of the cylinder in the place that you least want to look, the muzzle, but hey ho, I guess that can’t be helped. The barrel is not free-floating, but it does have a sleek moderator fitted that you barely notice. It is an over-barrel design, which keeps the overall length of the Armour down and also the noise, not that it is particularly loud gun when fired!

Loading is pretty hassle-free to be fair; simply fill up the cassette-type magazine, which is very similar to the type that you get in multi shot PCPs from FX. They can be a little fiddley, especially in .177 but as this test rifle is in .22 it wasn’t too bad! The .177 mags are 14-shot and the .22s are 12-shot.

To ready the rifle; pull back the sidemounted cocking lever and leave it to the rear, then slide in the loaded magazine from the right-hand side. You will notice a knurled knob with + & – marked on it, this is a power adjuster but only for the high-powered FAC models. Once the magazine is in position, close the action and a pellet is probed into the chamber and you’re good to go.

This is where it all goes a little downhill. The trigger is not amazing! Now, I know Bullpups have issues here, as the distance from the forward-located trigger blade to the actual rear-mounted, release mechanism has to be connected by a linkage, which does make for hard, long and flexible pulls. But this one really is not that pleasant to use at all and heavy too at just under 6 lbs and is nonadjustable! It’s a shame, because Kral’s Puncher Breaker Bullpup Quatro mechanism is such a much more refined design than the Armour’s. The trigger guard is metal and minimalistic but that said, it does seem to be a bit of an afterthought by the look of it.

The Armour does not come with any sighting system, not even irons, chances are you would not use them anyway! However, Kral have fitted a decent length of Picatinny rail that runs from the front of the magazine well the full length of the front body casing to just behind the muzzle, so the world is your mollusc! Typically, for a Bullpup, you will need high rings, as your head position is raised on this sort of layout. Accuracy then, well, considering the bad trigger wasn’t helping, it wasn’t that bad, as I was getting nice two pence piece sized groups at 30 yards, so not bad at all! But I feel that getting it adjusted to a better pull weight and release would shrink those groups considerably. However, this really should be done at the design stage and guns should leave the factory ready to shoot, as much of the Armour’s competition is well ahead on that all-important score!

So, all in all I think the Armour is an interesting looking PCP, but for me the trigger is a little disappointing, which does affect accuracy, but I reckon it’s still capable of good performance, which would of course mean a better trigger; annoying, as the mechanism in the Kral Puncher Breaker is much better and I’m surprised they have not picked up on that and done something about it! The Armour is quite weighty too at 4 kg un-scoped, but being a short design all this is pushed back into the shoulder; so, although weighty, it sits very stable in the aim. But if you have spaghetti arms then maybe time to give those dumb bells a dust off if you are thinking of getting one! Safe shooting! Rack.