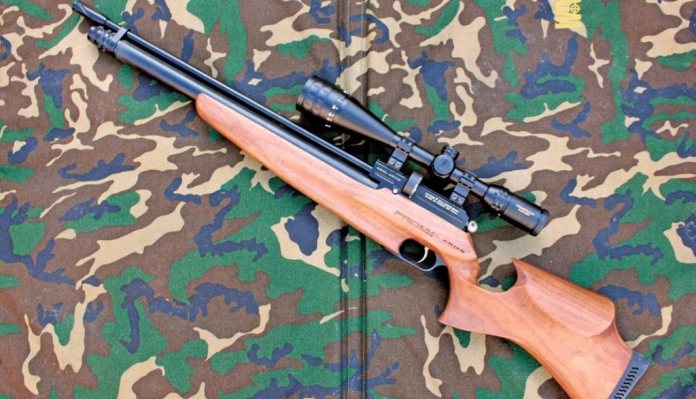 At the start of last year, Turkish gun manufacturers Kral launched their first ever PCP air rifle, the Puncher. After testing, I found it to be a surprisingly wellfeatured and designed with good overall-performance, plus a very attractive price tag. Initial sales showed it met with the general airgun shooting public’s approval; so much so that Kral decided to launch a ‘deluxe’ version. That nicely brings me to the rifle on test – The Puncher Pro.

Despite the connection by name, the ‘Pro’ is so different I’m surprised the company didn’t give it a new name. Externally, few features remain of its predecessor, as it offers a more traditional action; their latest design magazine system and the livery must be one of the finest crafted stocks you’ll find on any production PCP.

The Puncher Pro’s most striking feature is the well designed and finished, high grade Turkish Walnut furniture. The stock boasts a high, right-hand roll over cheekpiece with an ascending comb to give optimum head position for any optic you team the rifle up with. In fact, the comb rises so high at the rear, the woodwork curves swiftly, yet stylishly downwards, to meet the ventilated, thick black rubber butt-pad.

The steep, drop down pistol grip is quite slim and cleverly sculpted at the neck to give a full wrap around hold. This is due to it having a full and relatively deep thumb channel that sweeps all the way over from the right, plus it has two separate and distinctive thumb shelves, offering the shooter even more options for an assured and preferred hold. The right side of the neck is scalloped smoothly back, so that the heel of the shooting hand nestles comfortably into it, so your hand isn’t hindered in any way, resulting in a superb grip configuration from which to operate the trigger.

The stylish forend leaves the front of the metal trigger guard with quite a deep profile, then smoothly tapers upwards as it progresses towards its rounded tip. The wood has been pared away on either side to create a generous run of finger ridging, while the rounded underside has a lengthy panel of aggressive stippling to further aid grip. However, the scalloped area of the forend is more a cosmetic touch, as in use, your fingers don’t naturally fall into these areas for a leading handhold. Having said that; this design makes a bold statement in both looks and proportions, yet still manages to feel good in the hold. And optimises handling and shootability, enabling it to be brought up on aim surprisingly quickly and easily.

Filling with compressed air is via a Q/F-style probe, which mates into the inlet valve access point at the front underside of the lengthy air reservoir; it has a rotary metal collar to protect it from dirt and grit when in the field. A recommended 200-bar fill gives approximately 120-shots in .177 calibre and 140 in .22, as per rifle on test. The air gauge is of a manometer type and sits on the front of the air reservoir; I mention this as on the original Puncher it was recessed into the underside of the stock.

Now, you’d expect the action to be the same as used on the Puncher, but like the stock, this is again an area of major change. Gone is the side-lever cocking mechanism, to be replaced by a generously sized, chunky, rear-mounted stainless steel cocking bolt, and another surprise change is the magazine. I say ‘surprise’ as the former was a nifty innovative design, which impressed me due to its practicality. However, the unit used by the Pro has the look of certain other popular types used on many PCPs. I must stipulate though similar, it isn’t a derivative copy, but familiar due to the synthetic magazine having a Perspex faceplate and follows the format of having an inner ‘sprung’ rotor.

To load the magazine, revolve the Perspex faceplate clockwise against the spring tension, until it comes to a natural stop. You then drop pellets into the empty chambers one by one, as you let the cover return to its original position under your control, filling each empty chamber as it appears in the elongated ‘cut out’ aperture of the faceplate. Different calibres have differing capacities, with 12 in .22 and 14 in .177. Unlike many others of this type, the Kral loads into the right of the action block when filled and is slid into its housing ‘curved-side’ first.

Kept for the better

It’s not all change, as the company have retained a few features found on the standard model! One being the removable Hi-Viz open sights, but while useful on the former rifle and unique for a PCP, I can’t really see many requiring them if they choose the Pro. But, I could be wrong.

To briefly recap, the foresight assembly has a raised and height adjustable red fibre optic bar, while the rearsight is fully adjustable for windage and elevation, the U-notch being flanked by a green fibre optic band. However, once fitted, the foresight assembly doesn’t allow for a silencer to be used, as it replaces the muzzle weight, so ‘covers’ the silencer threads. It also retains the power adjuster, seen as the brass dial on the right of the action block – that corresponds to a small +/- vernier on the opposite side. As it only works on FAC rifles, sub- 12ft/lb shooters can ignore it!

Also worth noting, is that the action block has been machined to accept both 11mm and 22mm scope mounts. For test, Range-Right kindly supplied a Konus Pro plus 6 - 24 x 50IR centre dot duplex scope, and though a large optic, it proved a nice compliment for balance and handling. The reason this brand was sent with the rifle is because Range-Right are now the UK’s official distributor for all ‘Konus Optics’, so I’m hoping to test this much-improved glassware soon.

As for accuracy, with a 30-yard zero set and shooting rested the best groupings I attained could be easily covered by a 10p piece! Pushing the range out to 40-yards and the Pro proved it’s a rifle that’s still capable of kill-zone accuracy.

The trigger mechanism is a 2-stage adjustable unit consisting of a well curved, gold-anodised blade and a similarly finished manual, rocker-style safety lever positioned directly above and set on the right of the action block. The letters ‘S’ and ‘F’ boldly etched in white on the action clearly indicate its status. It’s generously sized and easily accessed by the thumb of the shooting hand, without having to adjust your firing hand grip! As pre-set from the factory, I found the trigger operated positively, tripping the sears without any noticeable creep, so I didn’t ‘fiddle’.

The 22-inch tube is supported by a substantial barrel band and the muzzle is threaded the normal ½ x 20 UNF and protected with a stylish muzzle weight. As most hunters will choose to fit a silencer, note that the rifle does become quite lengthy with one added. I used a Range-Right can, which came supplied for test. Its extra 6-inch length didn’t affect balance, and for those who prefer these types of full-size rifles, I’m glad to report that you’ll find handling and practical usage won’t be a problem, even with a can up-front, plus the major bonus is once silenced, muzzle report is almost zero!

The Kral Puncher Pro takes me back to a time when full-bodied sporter PCPs were expected to look like this and for many where all the rage. In fact, and apart from the multi-shot mechanism, it reminds me somewhat of the old Logun Professional MkII and even to some extent the full-bodied PCP sporters Ripley Rifles are renowned for. It might be a bit of a handful for some, but you must give credit to the superb new action, as the cocking bolt and operation are silky smooth and the magazine ticked around very precisely, shot after shot. My only niggle is the cocking bolt, though faultless in operation, it could be more ergonomic rather than having the ‘straight ‘connecting bar’ to ball-end handle design it displays.

Having said that; it’s inconsequential when you consider the Kral Puncher Pro is accurate, operates flawlessly, and is blessed with a stock that’s one of the finest designed and crafted you’ll find on any production air rifle.