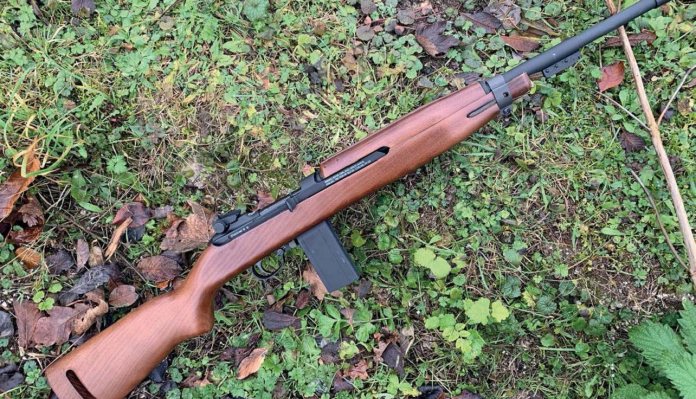 I consider myself very lucky, as I was around when we still had centrefire self-loading rifles and I owned quite a few different types. One was the US M1 Carbine; calibre-wise, not my favourite, because accuracy and effective range were quite limited, but a sweet little thing. It was also often found as a club gun, as they were cheap, as was the ammo.

The M1 Carbine is historically significant, as it represented a different approach to military firearms thinking. Mortar and machine-gun crews, radiomen, drivers etc did not need the full-sized and full-powered M1 Garand in 30- 06 Springfield, as their jobs did not require it. So, a lightweight, compact and easy to shoot short rifle was more preferable. It fought in WWII, Korea and even Vietnam and was also used by many other countries. Also, like many US Service firearms, it became popular after the war with civilian shooters.

Since 1988 we can’t own self-loading centrefire rifles in the UK, but there have been a couple of attempts to offer either .22 rimfire M1 reproductions, or manually-operated, fullbore versions. However, a first for me is Springfield Armoury’s CO2-powered, BB-firer and it’s sweet. I first saw it at the last BSS on the Highland Outdoors stand.

As I was to discover, the M1 is made for Springfield by a company called Air Venturi. There is a CO2/BB firing version as well as an Airsoft one, on test is the former. As a reproduction, it’s exact in most details and functions but with a few areas that I thought could be improved. So, let’s go for the tour!

The barrel is 16” and shows a 4.5mm brass inner liner encased in a dummy outer that mimics the M1. It also includes a bayonet lug and fixed blade foresight with protective wings.

At the tip of the forend is a removable barrel band, complete with sidemounted sling swivel. The stock is of the full/fixed M1-type and available in a wood effect polymer or real timber, which costs a bit more. Sadly, they don’t offer the side-folding M1A paratrooper version, which would be a ‘must-have’.

The action is probably Zamak; a zinc alloy and very accurate in its execution with one small omission. Forward on the right is the large cocking handle that reciprocates when the gun fires, on top of the finger hook is a plunger that allows the gun to be manually held open by pressing it down into a cutout. The rear sight is the early, protected aperture on ramp-type. For some unknown reason, it’s fixed for elevation and does not slide, but you can adjust for windage by the knurled knob on the right.

Like many of the more exact BB guns, the M1’s bolt cycles as it fires, which I like, as it gives it a realistic feel and a satisfying blatt as it goes off. However, you pay for this in extra gas consumption!

Controls are few and simple. The trigger shows a mid-width curved blade with a long, firm pull that breaks around 6lbs, but I was not expecting miracles from what is essentially a fun gun. The safety is identical, with a small lever at the right/front of the guard that flips up for SAFE and forward to FIRE.

The detachable box magazine is dimensionally identical to the 15-round .30 M1 original, in fact keeping with tradition, this BB version also holds 15. The release catch is a cross-bolt button on the right of the well and can easily be operated by the trigger finger with the empty falling free. However, it’s really heavy, as it not only holds the payload but also the 12-gram CO2 capsule, along with the release valve components. Again, this is what the more exact BB guns do.

The butt is identical to the original with its short, 13” length of pull (LOP) and low comb. This is finished off with a pressed steel plate and if you were wondering about the vertical slot on the side, it’s there to retain the rear of the sling on the original, using the issued oil bottle.

Filling and fiddling Having the gas and ammo in one selfcontained unit is nice, as it adds to the realism. A spare mag would have been good but they don’t include one. At the base is a screw-off cap that covers the 12-gram compartment; the capsule is dropped in nose-first then the cap is screwed back on to pierce and seal. Filling the magazine means pulling down on the front-mounted follower tag until you can push it into its locking cut-out. This then reveals the filling hole that the BBs drop into, then allow the follower to go forward under control and you’re ready.

I did have a problem with the first mag; as I was pulling the follower back, the spring suddenly prolapsed out of the cut-out and got coil bound. It was a bugger to untangle, so much so it never compressed properly again. Highland sent me a replacement and I did not have any further issues. However, it’s easy enough to punch out the pin at the base of the mag and remove the spring and its guide.

Operation is simple; set to SAFE, slap in the mag and cycle the action, flip to FIRE and shoot. Operation was good but note the action will not automatically lock open on the last round, just like the original.

Using Umarex 4.5mm BBs, I was getting an average velocity of 393 FPS (425 FPS is claimed) with an extreme spread of 47 FPS, producing 2.7 joules. At 10 yards it was printing 1 – 1.5” groupings that were a bit high, but pretty good none the less. Shot count was about three mags per capsule. But with CO2 the gun gets colder as you shoot, which turns the gas into a solid in lower temperatures. By comparison, a Umarex Glock Gen 4 self-loading CO2 pistol with a 4” barrel is doing 302 FPS/1.3 joules, from the same shot count, with groups of 3 – 4” at 8 yards. Seems the longer barrel of the M1 makes a difference!