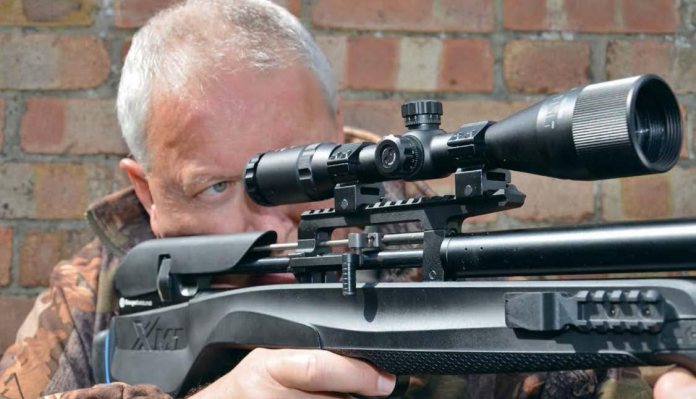 One sector of the airgun scene that seems as popular as ever, is bullpups, and this military-derived concept is now represented by many manufacturers. Stoeger only entered the PCP market in 2020, with its XM1, but it was only a matter of time before it deemed it necessary to add a bullpup alongside.

The XM1 Bullpup is particularly stylish. For those unaware, Stoeger is part of the Beretta Group, so understandably big-up their Italian design heritage, and this model certainly benefits from this influence. It’s not just a case of ‘sling the standard action to the back of the stock’ either! For look closely and it’s clear that the XM1 Bullpup is a totally new model, built pretty much from scratch.

A big part of the bullpup remit is that by keeping the action rearwards, length is dramatically reduced, balance is transformed and handling is therefore different to that of a conventional layout. Being able to cock and cycle the action with the gun still mounted in the shoulder is a huge advantage, and the XM1 Bullpup, with its dedicated design, allows for just that.

As with the original XM1, the Bullpup comes complete with a host of add-ons and accessories. Inside the box, you get 2x cassette-style magazines, 2x cheekpieces, 2x pistol grip inserts, 2x Picatinny rails, a forward grip and blanking plate, a filling probe and an instruction manual. That’s quite a list, and with a shrouded barrel, regulated action, manometer, 2-stage trigger and side-lever all part of the deal, there really is plenty to get excited about.

The bullpup configuration obviously needed a new stock and the flowing lines of the ambidextrous ‘Human Tech Design’ synthetic moulding (Stoeger’s sales blurb), sets this model apart in terms of visual appeal. The drop-down pistol grip feels just right for me and the fact that the blue grip can be added is a neat idea, adding further detail to an already ultra-stylish gun. There’s more to it than that though, as it’s all part of the adjustable elements that feature here, which we can now look at in more detail.

The ‘Comfort Rear Pad’ is what Stoeger calls the adjustable butt pad section, and those coloured spacers can be added or removed to increase or decrease the length of pull, via the two screws coming in from the rear.

Anyhow, silly labels apart, suffice it to say there is plenty of grip.

The ‘Multi Grip System’ consists of a choice of pistol grips for the bullpup. The black is XL and offers slightly more bulk to fill a large hand, whilst the blue grip is the smaller of the two and adds a cool look into the bargain. Twin cheekpieces come under this area too, offering a choice of different heights for eye/scope alignment.

Two Picatinny rails are also supplied. They simply screw-fit on each side of the forend, allowing all manner of lasers and torches etc to be bolted into position. If you fancy a clean hold up front, then just leave them off. That’s the beauty of the design.

Finally, there’s the forward grip, which is well worth looking at. A small grub screw on either side of the forend tip holds a blanking panel in position. Just remove these, pull off the panel and push the vertical grip into position. Nip up the screws, and the handling is transformed.

It’s all very neat and well thought out, and once you configure these elements to your requirements, you can then concentrate on getting familiar with the gun itself.

Right, we’re happy with the general feel of the stock elements. Now it’s time to focus on the action and the usual preparation that any multishot PCP requires. Take a look at the action and you’ll notice that the barrel is nicely finished with chemical bluing, whilst both the barrel shroud and cylinder get a highly practical matte black coating. Everything feels well made and the build quality overall is commendable.

The sizeable cylinder has a 265cc volume and this is coupled with a fairly high fill pressure of 250bar, meaning that we should be looking at a fair old shot count. Charging the system needs either a pump or divers bottle, and the filling adaptor supplied is of the probe variety. Just pull forward the spring-loaded dust cover at the front, insert the airline, and slowly open up the pressure. Then, bleed off and remove the airline.

Next up, we need to fill the magazine and here, as mentioned, Stoeger provides two cassette-style rotary mags, which have a metal casing and clear lid. Again, they feel precise and very well made. 11-shots in .177 as per my test gun, 9 in .22 and 8 in .25. To fill the mag, twist the front cover anti-clockwise against spring pressure, then insert a pellet skirt first into the one exposed hole from the rear. This prevents the drum from moving and you can now drop a pellet head-first into each remaining hole from the front. Job done.

That weird term ‘Intermount’ comes into play now. It’s a requirement of the bullpup configuration as the shooter has to effectively sight over the action that sits at the rear. The Picatinny scope rail bridges the barrel and clamps around the cylinder. A reach-forward section on the rail allows plenty of room to get a scope positioned just right, and couple this with the interchangeable cheekpieces of varying heights, and it’s not hard to achieve a comfortable position. Ready? Let’s see what this XM1 Bullpup can do.

Flick the side-lever and it flies back. Pulling it back further is then effortless, until a small pull at the end of the arc. More effort than some, but pretty easy nonetheless. The full magazine can now be snapped into place from the right side of the action, and it all feels positive in use. I’m not keen on the manual safety catch, as the push button is actually in the trigger blade itself. Never mind, just ignore it.

In use, the magazine system cycled without a hitch, with the side-lever action working faultlessly, and with the perfectly-placed lever halfway along the action, this can all be done with the gun in the aim in the shoulder. This configuration admittedly necessitates a remote trigger linkage, which can sometimes be the source of a vague let-off and sloppy feel, but in the case of the XM1 here, I can’t say I noticed any such drawbacks. Muzzle report isn’t an issue either, with some suppression going on inside the shroud, although for hunting, whilst harsh tones are removed, there is still significant noise as the shroud back vents. Spin a silencer into place on the thread at the muzzle and this dies right off.

Pointability may not be a word, but it perfectly describes how this Stoeger handles with the front grip in place. Basically, it handles really well and feels great in the shoulder. In use, the accuracy was fairly average, but this will vary slightly from barrel to barrel as usual. Over 30 yards, with a variety of ammo, 5/8”- 3/4” c-t-c was the norm but consistency was pretty impressive, with ammo straight from the tin returning a 23fps total spread over 154 shots. Proof positive that Stoeger’s onboard regulator is pulsing as it should be.

So, a tasty-looking Bullpup for sure, with unique styling and sound build quality. How successful it will be remains to be seen, and in a competitive market, the XM1 Bullpup is up against some seriously good competition. As for pricing, originally set a lot higher, this model is now retailing officially at £650. As is often the case though, shop around and asking prices are varying quite a bit, with discounting going on in some quarters. Value for money then is a trump card for Stoeger, and if my straw poll is anything to go by, the stylish profile and unique design flair on offer will serve this model well.