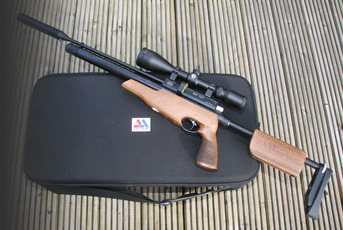 Due to the positive feedback received to my last article voicing my views on take-down PCP air rifles and the increased interest in them from the buying public the Editor has asked me to give mini reviews and stats of the four I rate most highly. Incidentally, I’m detailing the calibres I favour for each so the shot capacity holds true for that alone. All are available in the ‘other’ popular calibre and of course you need a scope and in some cases a silencer but these are my views and the ones I highly recommend you consider.

A, The Air Arms TDR shown on the deluxe carry bag – in my opinion the take-down of all take-downs…

B, No surprises it runs the time tested S410 multi-shot action

The Air Arms TDR is a well thought out design but then again it uses the company’s S410’s tried and trusted action. It’s not only the metalwork that makes this a winner because the take-down by its very essence relies heavily for balance and handling on how the components fit together to make a complete rifle. In my opinion the TDR takes the gold prize for that alone.

We first saw the rifle in .22 calibre but a low shot count had many passing for the full stock carbine version. It wasn’t until the .177 was launched that more attention was paid to the TDR and rightly so, as this is in my opinion is the one to beat!

The rear section is little more than a piece of walnut on a metal rod with three prongs on one end and an adjustable butt pad on the other. The prongs engage into the rear of the action and a screw at the top of the butt pad pulls it all together. It comes supplied with AA’s dedicated, Pro 76 silencer and is by far one of the most accurate, light, and quiet in this round-up.

As mentioned the rear mounted cocking bolt runs the time tested 10-shot removable rotary magazine and a charge of 190-bar gives 60 full power shots in the .177. With a 2-stage, adjustable trigger with manual safety in the blade and a lovely forward taper forend with accessory rail underneath should you decide to fit a bipod, this rifle in my book has shown the pack whose top dog.

D, The ‘Enigma’ is the only take-down that offers a full true ambidextrous wooden butt section with cheek piece and ventilated rubber butt pad
Though having a chequered beginning the rifles early glitches were soon ironed out and the one I favour is the Tactical version or ‘Shorty’ as it’s known. You’ll have to source a case if you want to transport it in a more suitcase-type, as for reasons best known to Brocock they supply the Enigma in a full length ABS Flambeau case!

However, that aside, unlike others featured here, this rifle, though breaking down into three sections has a full wood butt section with a generous, fully ambidextrous cheek piece. This ‘screws’ into the rear of the action and the silencer supplied fits onto the ½” UNF threaded barrel. The rifle has a straight pull action that runs a very reliable Perspex-fronted, 9-shot magazine. It boasts a quality 2-stage adjustable trigger and manual safety and from a 200-bar fill gives 45 shots in the .22 calibre.

E, When you purchase the ‘Gunpower Stealth’ you have the option to virtually build a full ‘tactical rig’ such is the design

Gunpower have a long history of manufacturing these rifles and are now on a MkII version. The Stealth in my opinion rates high on the list despite its lack of a quick back up shot and the need to purchase the dedicated but highly efficient silencer.

With the Stealth you have the option to virtually build a full ‘tactical rig’ such is the design. The ‘base’ rifle breaks down into two sections - a rear mounted buddy bottle that holds a 200-bar fill to give an amazing 500 shots in .22 calibre.

The buddy bottle comes shrouded with a neoprene sleeve holding the shoulder pad, and screws into the rear of the metal mainframe that has a unique cocking action. A plug protects the shrouded barrels internal threading, but after screwing in the optional, chunky and dedicated silencer you push the neoprene covered bolt on top of the rifle forward to reveal the breech, direct load the barrel then pull back the top lever to seal it up and you’re good to go.

The 2-stage adjustable trigger unit has a manual safety. The rifle in various strategic areas has ‘dovetailing’ and ‘rails’. The former for mounting a scope and the latter for accessories the company can supply - such as a laser and bipod.

Made in Sweden by FX airguns the rifle breaks down into two parts, those being a buddy bottle and the forward section mainframe and barrel. This is the second take-down that doesn’t come with a silencer, but rather has a muzzle break fitted onto the standard ½” UNF muzzle.

Thankfully in the ABS hard case supplied there is a section for a silencer of choice as I’m sure many will agree a PCP for hunting and ‘discreet pest control’ certainly needs one. The bottle screws into the rear of the body of the rifle and thanks to a clever ABS sleeve and integral butt pad you get a shoulder fit and a cheek rest.

The rifle uses a neat side-lever action to run a reliable 8-shot drum shape magazine. With a 2-stage trigger and manual safety the Verminator is capable of giving 200 shots in .22 calibre from a 200-bar fill. This is a formidable yet admittedly pricey take-down built to withstand the rough and tumble of duties as diverse as ratting to feral pigeon clearance.