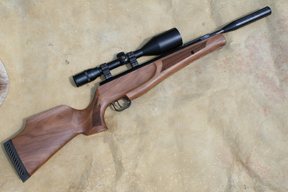 The .20 is often called the compromise calibre or the American pellet. Why? Well, they fly almost as flat as .177, yet hit almost as hard as .22 – the Americans have embraced these qualities, yet the .20 has never really taken off in the UK.

There's no doubting that .20 pellets are among the most accurate, aerodynamic and hard hitting for use in an air rifle. I use a Venom .20 Viper in 12 ft/lbs guise and a .20 Eliminator FAC rated at 24 ft/lbs for longer shots - both of which are superb in their own rights. The only draw back is lack of pellet choice over the old stalwarts .177 and .22, and finding a rifle supplied in .20 calibre in the first place! Thankfully, Theoben can offer some of their models in twenty calibre, including the Evolution.

Not wishing to cut any corners - other than overall length - I opted for the Evolution K carbine which wears a 7.5 inch choked barrel with a total overall length of only 37 inches.

Standard models are fitted with an Evolution moderator but a Vortex upgrade can be ordered as an option as well as the rifle being offered as a left handed version.

The Break Barrel has Evolved

Designed as an ultra compact hunting vehicle for steering pellets running at the legal energy limit, the Theoben Evolution carbine is a thorough bred air rifle. I like the uncomplicated design of the break barrel system, I guess because people of my age grew up on this method of cocking an air gun. There are many benefits to this simple system, and Theoben have some of the best swing barrels in the business. Being able to maintain a positive lock up between barrel and breech face is essential, not only for sealing (to ensure no power loss through air leakage) but also to ensure a repeatable barrel position to maintain consistent accuracy. Theoben have this covered with an extremely positive barrel latch or detent system. A healthy tap on the barrel to literally break open the barrel from the breech jaws is required and then a smooth short cocking action which on this carbine model is quite heavy due to the very short barrel, even with the Evolution silencer fitted. A swing back up with the barrel and it is secured and held in alignment by the latch locking mechanism, so the barrel has the same vertical alignment each and every shot - it's an age old system that Theoben quite simply have perfected.

The 7.5 inch barrel delivers exceptional accuracy from its 12 land rifling profile with choked muzzle section. Some times .20 calibre rifles are fussy with regard to the skirt diameter of the pellet but for some reason this barrel consumed all tested makes with no problems.

The Evolution is a smart looking moderator with lines in keeping with a classy rifle. Noise reduction is all you require - a dull 'phut' is all that is heard - but if you wish to upgrade then a Vortex addition can be ordered as an option. Either way – these are both good moderators - perfect for the velocities that the .20 generates and an essential hunting accessory.

Delivery of power is via the now famous gas ram system, negating the use of a spring power plant. This HE (High Efficiency) unit has a double 'o' ring sealed steel piston head arrangement that is counterbalanced on firing with a floating inertia weight. This really counteracts the forward movement of the piston, thus deadening and almost completely eliminating recoil. This is the best part of shooting a gas ram gun; the lock time is superbly fast, as the pellet is on its way as soon as that trigger sear disengages, with no prolonged drag time to deviate the pellet from its intended target.

These are not the only benefits, overall the rifle can be made lighter, the whole shooting cycle is very slick and virtually silent, plus the gas ram can be left cocked whilst out hunting without fear of spring fatigue, although this is not really a problem with modern springers anyway.

The gas-ram is a self contained propulsion system maintenance which is virtually free; and in the unlikely event that you do experience any problems, then let Theoben take a look - don't fiddle with it yourself.

The two stage trigger is also a fine mechanism; smooth and predictable in operation with a good degree of adjustment. A safety lever sits in front of the slim trigger blade within the blacked steel trigger guard. This lever is automatically set as the rifle is cocked and is a good safety feature to have on any break barrel rifle. The blade moves rearward on cocking and is easily flicked forward and off with the trigger finger. If you change your mind then it can be reset at any time, making for a versatile safe operation of the gun.

Where the Evolution differs a little from other Theoben rifles is that it has 6” of standard dove tails for scope mounting rather than the company's usual fixed mounts.  This allows a greater degree of positioning for the mounts to accommodate most scope body lengths, but watch out, because some long scopes might over hang the barrel breech making it difficult or impossible to cock! If you want, Theoben offer a one piece Dampa mount that fits the rails for the best in scope friendly recoil reducing support, but I found I had no problems with conventional scope mounts.

The Theoben's metalwork is well finished in a deep lustrous bluing, but it's the stock that really catches your eye. The Evolution stock has distinctive lines and is very user friendly. Crafted from a good grade of walnut with pleasing grain, if a little lacking in overall colour, the ergonomics are what really impressed me. Viewed from the side, underneath and above, all the flowing contours are revealed to make up a truly comfortable and multi postional stock design. The long semi Schnabel forend gracefully protrudes forward of the breech and has a rounded under side for comfort with the rear forend section having chequering panels to both sides. This further swells to form a ridge that reaches right back to the trigger guard, so the supporting hand can be positioned forward or back depending on your style or position at point of taking the aim. This Evolution sporter stock handles perfectly, and I say this as a died in the wool thumbhole stock lover!

The pistol grip is generous and well chequered, with a high cheek piece and roll over right hand configuration, although lefties are also catered for. A ventilated black recoil pad gives a good length of pull to the Evolution, just over 14 inches, and does grip the shoulder when the rifle is mounted.

All in all this is a beautifully balanced and well made hunting tool that just screams to be taken among the rabbits and pigeons, so that's just what I did.

Evolution in the Field

I fitted an old - but good - 6x56 Stirling scope and sighted in at 30 yards range whilst testing all the .20 calibre pellets I could muster. The Field Target Trophy's (FTT) always shoot well, but are sometimes a bit of a loose fit in the barrel of other .20's and my FAC rated Eliminator rifle just loves Eliminator 12.5 and 15.6 grain pellets.

The Evolution was not at all fussy, and although some of the heavier pellets were a bit low in energy, they were still accurate.

At 30 yards accuracy from all pellets used was good, with group sizes all below 0.75 inch, which from a sporter grade rifle is very good. Best of the bunch in terms of accuracy and velocity were Crosman Premiers, unsurprisingly cruising along at 599 fps and 11.34 ft/lbs and producing neat 0.45 inch groups on paper. Slightly better were the FTT's at 0.45 inches with velocities of 676fps and 11.79 ft/lbs - a nice flat shooting pellet. The Eliminator 12.5 grains produced the best groups at 0.4 inches at 30 yards with a velocity of 616 fps and 10.54 ft/lbs.

The Diablo Baracuda's shot a consistent 0.55 inch group but with a slower velocity of 552fps and 9.3ft/lbs energy.

As the FTT's shot so fast and flat, I chose to use these to roll a few bunnies and topple three brace of pigeon. Quick actioned, accurate, enough power with really good shooting characteristics, the .20 Evolution carbine is an excellent hunter and at a good price – just £425. It's nice to shoot a non pre-charged and not have to worry about air levels and recharges.  The simplistic break barrel system still has a lot to offer the traditional or dedicated hunter. The .20 calibre is my favourite but you do have to choose your pellets wisely to fit your barrel dimensions to optimise performance, get that right and you are on to a winner.